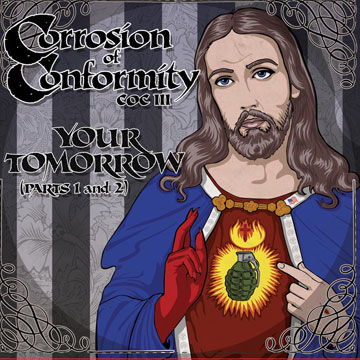 Corrosion of Conformity – Your Tomorrow 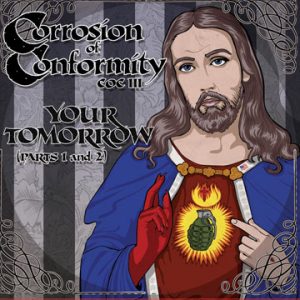 The Animosity lineup returns with a two-song single of modern stoner rock. The best COC record since Technocracy!
Rating:

Corrosion of Conformity started way back in the early 1980s as a hardcore punk band who had one of the coolest logos in the world. Their music was hard as hell and as fast as light and while they weren’t the greatest hardcore band by any stretch of the imagination, they sure garnered a lot of fans and did put out a good first effort. Then, presumably as they learned to play their instruments better, they started “going metal” which many of the bands back then did, except when COC did it, they became a better band. Their two records that followed this change, Animosity and Technocracy, have become legendary punk/metal crossover records that have withstood the test of time and became very influential.

Somehow though the band morphed yet again as membership changed and they became this big alternative rock/metal band that became hugely popular for a short period of time in the 1990s but in my opinion weren’t nearly as good. In fact I will admit it, I couldn’t stand that version of COC! After a six-year hiatus, the core members, Mike Dean, Reed Mullin, and Woody Weatherman have returned without Pepper Keenan (at least for the time being as he is busy with the amazing New Orleans band, Down) and decided to make this new COC single and hit the road to play the songs from the aforementioned second and third records that everyone loves.

Your Tomorrow features two songs: “Your Tomorrow Part 1” and “Part 2″ on either 7” vinyl or digital download. The music isn’t the metal/hardcore crossover of the old times or even the southern fried heavy metal/alternative rock of the 1990s, instead this “new” COC has a lot more in common with Saint Vitus. Each side is a four-minute journey filled with down-tuned Black Sabbath inspired heavy riffs played at mid-tempo with the pace picking up a bit here and there but nothing near anything resembling hardcore. The vocals are very much in the stoner rock genre and that is where the Saint Vitus resemblance comes in. COC pull it off easily and these are the heaviest and best songs the band has written in years and if this is the direction the “new COC” is headed, they may once again become a household name but this time with a lot better tunes that got them there!