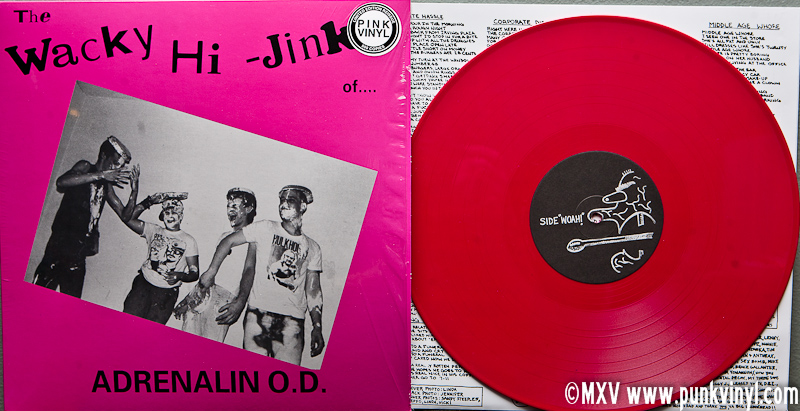 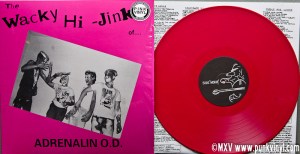 When I was a young teenager back in the early 1980’s I bought this great compilation LP called Flipside Vinyl Fanzine Volume One. This was back when compilations were actually things you wanted to buy and labels took the care to put out great ones instead of lame collections of cover songs or rejected tunes. In fact some bands put their best songs on various compilations (I’m looking at you Articles of Faith). Anyway there was this band called Adrenalin O.D. who had a thrashy hardcore rendition of The Brady Bunch theme on this record and I thought it was great and a lot of fun. Fast forward a couple of allowances later and I bought another compilation, We Got Power: Party or Go Home, which had another Adrenalin O.D. song on it called “World War 4” that ended with a goofy cover of the children’s song, “Pop Goes the Weasel”. I thought this band was awesome and sought out their album which a friend of mine ended up finding before me. He brought it to school and let me borrow it and after one listen I demanded he trade it to me. He relented and I played the shit out of that record for years. It’s amazing I didn’t wear holes in the thin vinyl it got so many plays. In fact I still own that very copy.

Adrenalin O.D. hailed from New Jersey which during the heyday of hardcore punk, what a hotbed of great bands. In fact if a band was from that state I’d buy their record on that criteria alone and was rarely disappointed. While that state had more great bands than you can count on two hands, Adrenalin O.D. was easily the best and the most fun. These guys played blistering fast hardcore and had a wonderfully goofy sense of humor. They weren’t a political band, they weren’t a personal one, they poked fun at everything and because of that they really stood out among the hundreds of other bands playing similarly styled music at that time. It didn’t hurt too that the band wrote a lot of great songs too.

Now on the album’s 26th birthday it has just been reissued on vinyl which was the format it was born on and the format it has been unavailable on for close to 20 of those years. Psychic Volt Records had the honor of being the label to do justice to this hardcore classic and offer it up in its remastered glory.

The mastering and mixing quality of the original record was never its strong suit. In fact the low-end was almost nonexistent. The first thing I noticed when playing this new version was that was fixed much like it was for the remastered CD that came out on Chunksaah Records a few years back. In fact I would imagine that was the source used for this LP. You immediately notice in the opening to the first song, “A.O.D. vs. Godzilla” that Dave Scott did indeed have a kick drum and wasn’t just playing a snare and cymbals. The album has a much fuller sound to it and has never sounded better. In fact this reissue guarantees I will never play my original versions of this LP anymore because this new one sounds light years better.

The record is pressed on a nice, thick opaque pink vinyl and comes in a standard jacket that looks identical to the original with the sole exception being the label information on the back of the sleeve which obviously has the information and logos of its issuing label and not that of Buy Our Records. The record is housed in a printed inner sleeve that has the original lyric sheet and photos on it. The photos were obviously scanned off an old copy of the lyric sheet and not de-screened so they have a moire pattern in them and is in fact the only blemish on the entire package. It’s a small gripe though and doesn’t detract from the overall package. Even the labels are identical to that of the original pressing which was a really nice touch. The only other difference is that the version of “Rah-Jah!” is the one with the much shorter introduction/sample from the TV show which is the same that you’ll find on every CD version of this album as well. Unless you were familiar with the original vinyl edition of the album, you’d probably never know the difference.

This reissue is limited to a mere 500 copies and you can get it directly from Psychic Volt Records. This is one of the all-time classic hardcore records that belongs in everyone’s record collection and even if you own an original copy you would be well served to pick this up as the improvement in sound quality more than warrants double-dipping. Kudos to the label for a job well done!