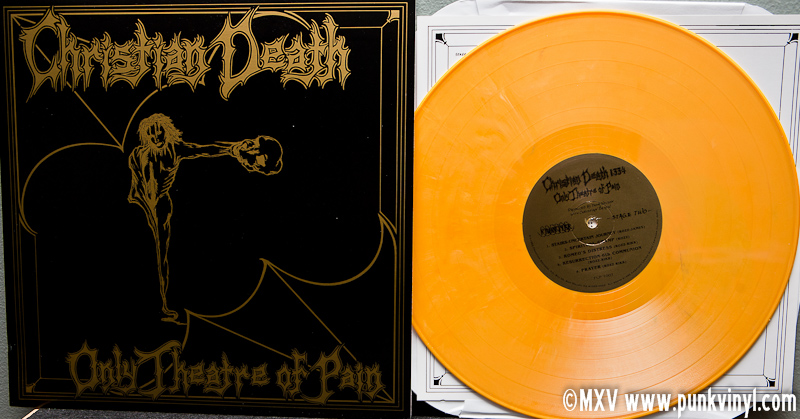 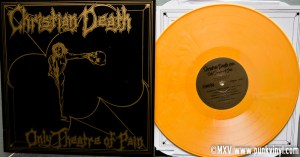 The Frontier Records 30th anniversary bash may have come and gone (which I unfortunately missed) but the celebration continues in round, flat, colored form with another new color of an old classic. Christian Death’s first album, and only one you need, Only Theatre of Pain, has just been issued on a sweet new color of vinyl.

This album really helped put goth music on the map, and it could be argued it helped kick-start that entire genre. This is at least true for the United States. Sure the UK had Bauhaus (who never claimed to be a goth band) and Siouxsie but what did we have? The answer to that is very little my friend aside from a blossoming punk rock scene where some punk rockers joined forces and forged some new music ground which was quite a stretch for a young Rikk Agnew who played guitar in Christian Death after being well-known for being in the Adolescents.

When I was a young punk rocker, I first heard Christian Death on the Hell Comes to Your House compilation. I thought their track, “Dogs”, was one of the best songs on that album and I immediately picked up this album and it has been in regular rotation ever since. In fact this record ages better than fine wine and I enjoy it even more than ever in my old age. It has true staying power.

This album has just been pressed on opaque yellow vinyl. This banana looking piece of vinyl is housed in a nice standard jacket featuring the gold ink found on the original pressing of the album. It also comes with a glossy lyric sheet too. The album will set you back a measly $13 to have it shipped directly to your home anywhere in North America which is a really fair price if you ask me, and not too much to ask to remedy the faux pas of you overlooking this gem if you don’t have one in your possession. For me I’m happy to have another variation of such a great album and it looks beautiful lined up next to its few colored predecessors.  You can grab yourself a copy of this album directly from Frontier Records.