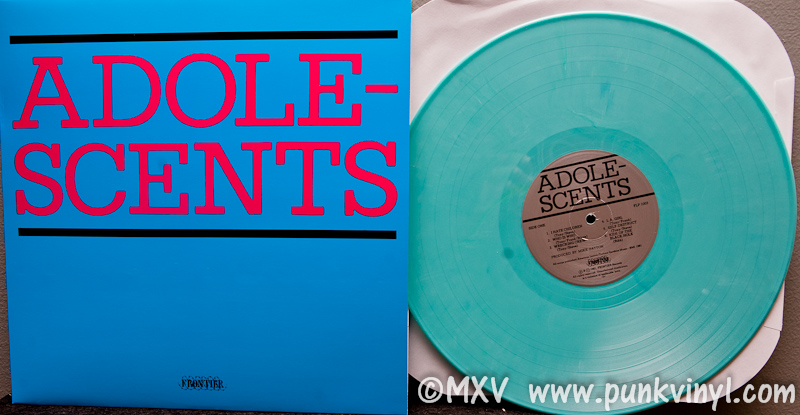 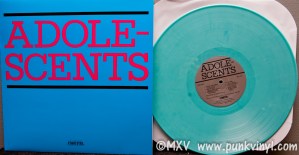 Spring means spring cleaning and there was some cleaning going on over at the pressing plant. They cleaned out the plates of the old color of the first Adolescents LP on Frontier Records and they poured in a brand new color just in time for Easter.

Much like the Circle Jerks LP I wrote about yesterday, the Adolescents LP really needs no introduction. You should own one already and if you don’t then you at least should be familiar with it. If you haven’t heard it before then you are no friend of mine as it happens to be in that list of all time greatest punk rock albums. This album has so many good songs that it would be a greatest hits collection today except it was the band’s debut instead! This band came out of the gate batting 1000. Not only that but they followed it up with an equally great 7″ on the same label too! This album also features their smash hit, “Amoeba” which is one of the best punk rock songs ever and some of you may know it as being in one of the early Tony Hawk games. This is one of those albums that was in heavy rotation back in my teenage punk rock youth and still gets steady play almost 30 years since its release.

This LP now comes on turquoise vinyl which is a perfect match for spring weather. It also included a glossy lyric sheet so you can sing along to the great tunes and figure out exactly what Tony is yelling about in all the songs. It is available for a limited time directly from Frontier Records for those looking to fill your Easter baskets with something cool besides jellybeans and chocolate eggs.  Thank you Easter Bunny (ie: Frontier Records) for sending me an early Easter gift which will get repeated plays while stuffing my face full of candy.