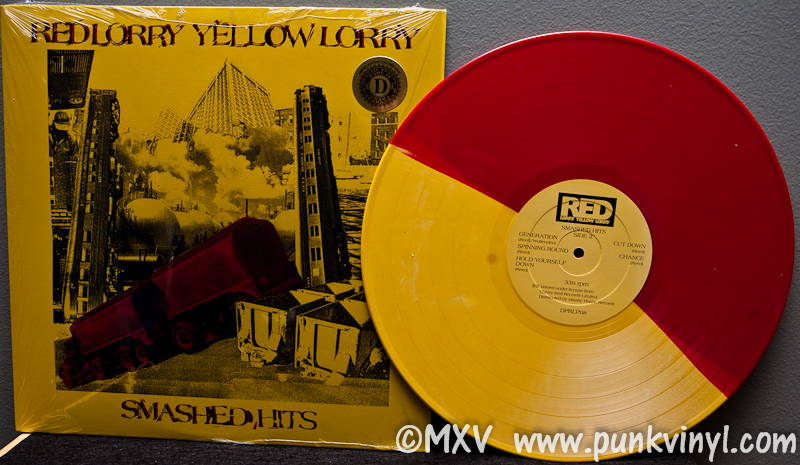 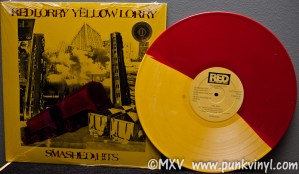 Red Lorry Yellow Lorry was a band that formed in the UK in 1981 and lasted about ten years in various incarnations before calling it a day back in 1991. In their wake they left a bunch of singles and a couple of albums. Their first two albums did so well for being on a small indie label that they warranted a “greatest hits” collection after its release and that is where Smashed Hits comes to play which was originally released on the Red Rhino label way back in 1987 and collects songs from the band’s early singles and albums.

The music of Red Lorry Yellow Lorry was a sort of gothic post-punk. They have sort of angular clangy guitars and dance drum beats that have a machine like quality yet were played by a human. The vocals are low-pitched and have an echoed and hollow treatment to them as if the singer was singing in an abandoned church. The band sort of sits comfortably between Southern Death Cult and Sisters of Mercy in the musical spectrum and any fan of that era of music would find great enjoyment in this band. I missed out on this band initially and didn’t get a chance to hear them until long after this LP went out of print when someone had given me their old copy when they were getting rid of their vinyl. While the record isn’t particularly rare, it certainly isn’t something you stumble upon at used record stores very often and it is a record that deserves to be heard by younger generations.

The LP is found inside a full color standard jacket that preserves all of the original artwork with the only exception being replacing the old label information with that of the reissuing label, Drastic Plastic Records. Even the bar code was carefully placed in the same footprint as the original label’s address. The only other noticeable difference is the darker shade of red used on the reissue’s cover. The record comes on beautiful red and yellow split colored vinyl which not only compliments the cover art but the band’s name as well. It was a very nice touch that makes it cooler than any original pressing. The labels look nearly identical to the original as well. The sound is quite close to that of the original too but this new reissue seems a tad bit louder which is probably due to modern/better mastering techniques. It sounds as good as ever, if not better.

Drastic Plastic Records hit another one out of the park with this unexpected reissue of an album that deserves either revisiting for those of you who used to be a fan of the band, or a first time visitor seeking some great music you may have missed out on the first time around.