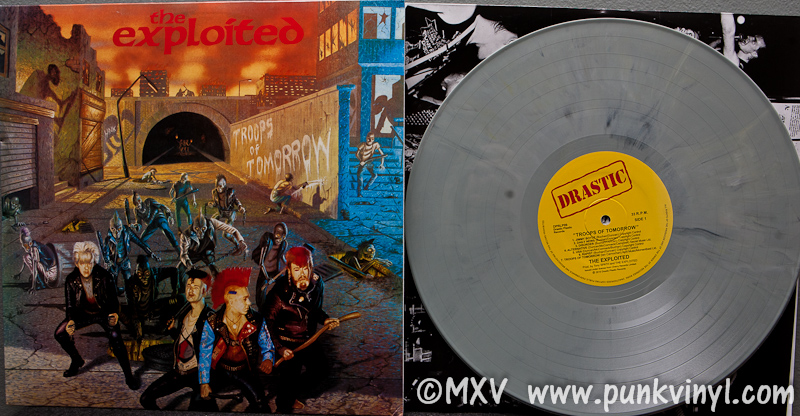 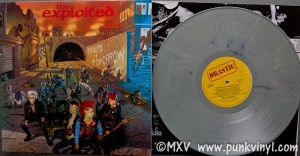 The Exploited were quite prolific in their early years. In the same year as their debut LP was released they also released a live album and the following year, 1982, saw them release another new studio album, Troops of Tomorrow. Just like the first album, this one was also originally released by Secret Records. Musically the band hadn’t changed much and this was a couple of years before the band started dabbling in crossover metal that took hold of a lot of UK bands like GBH and Discharge.

Just like their first LP, this LP has spent at least half of it’s later years on this planet unavailable on the vinyl format and was only available on those silver plastic coasters ever since the music industry started embracing them as the format that will change the world. I guess in a way it did change the world, but not really for the better when it comes to presenting old punk rock and certainly not for the better in terms of presenting artwork.  A new label with a lot of good sense, Drastic Plastic Records, took it upon themselves to restore this Exploited LP to its former analog glory and do a better job than the label that originally issued it.

The record comes inside a full-color, standard LP jacket that reproduces the original artwork cleanly and exactly. The only differences are the label information and the bar code placed in the lower right corner of the back cover. The vinyl is tucked inside a printed inner sleeve that has black and white photos of the band on both sides. They sure were young in these photos but so was I when this album was originally released 29 years ago! The record itself is pressed on gray marbled vinyl and the labels look exactly like the original pressing except the logo was changed to say “drastic” instead of “secret”. The record has been remastered from the master tapes and it sounds as good if not better than the original pressing (most likely better as if you are old enough to have bought this the first time you probably spilled beer on yours when you were young). It’s a solid purchase for any Exploited fan new or old, and a worthy upgrade to your original should you have one.