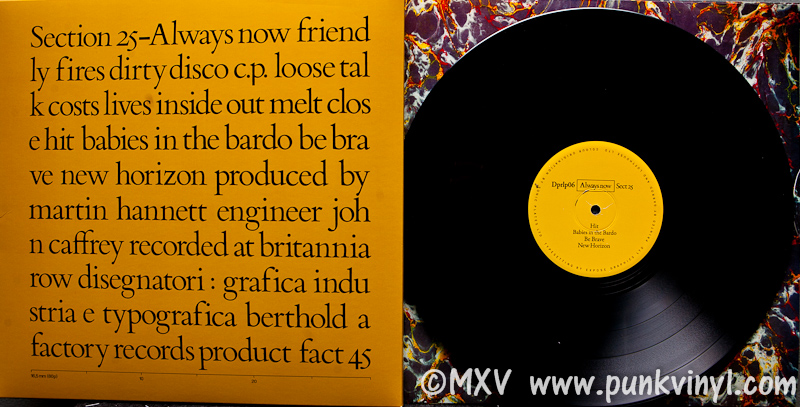 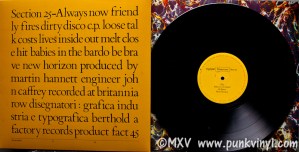 Section 25 was a post-punk style band from the UK that formed in the late 1970s. They quickly became label mates with Joy Division on Factory Records which was no coincidence as the two bands shared a somewhat similar sound. Section 25 put out one 7″ before recording their debut LP, Always Now, which was released in 1981.

The music on Always Now is early post-punk that shares similarities to that of the early Cure, Bauhaus, and Joy Division. The guitars are a bit droning and feature some odd tunings. The bass lines have a bit of a goth feel to them and are pretty meaty and atmospheric at the same time. The vocals are a bit subdued and melodic, slightly buried in the mix. Similarities to Joy Division are hard to ignore which may be partially due to this album being co-produced by Martin Hannett who was responsible for producing Joy Division as well at the same time and that whole scene being rather small. Always Now is a really enjoyable album for that time period and the music still sounds as excellent today as it did three decades ago when the record was originally released.

Always Now has the distinction of being the most expensive to manufacture record on the Factory label. The record came housed in a fancy fold-out sleeve that was sort of like a matchbook. Inside was a full color inner sleeve that was printed to look like it was marble. I’m not sure how much the record cost when it was originally released but I’m guessing it was one of the more expensive records of its time, especially considering here in the USA it would have also been an import. As you can probably guess, the record has been out of print on vinyl for easily the last 2/3 of its life.  Even the label ceased to exist a long time ago.This was a rather unlikely candidate for being reissued due to the elaborate packaging but Drastic Plastic Records was just dedicated enough (or crazy enough) to take on the task.

This new reissue preserves nearly all the original packaging. The deluxe fold-out cover has been reproduced exactly like the original with the only difference being the addition of a bar code on the back cover. They didn’t even add any of their own label information to the cover whatsoever. The inner sleeve features the same artwork as the original in full color. I’m not sure how it may differ from the original as I don’t have one to compare it to but it looks like a standard full-color printing job so it may not have been as expensive as the original but it still looks great. The label looks just like the original did too except they changed the label info and catalog number to reflect the new label. The record is pressed on 180gm black vinyl which is about the best way you could top off a quality package.

The mastering job, as usual, would easily rival the original or even top it. The record sounds incredible. Everything sounds clear and full and better than it would on any CD version that’s for sure. Any fan of early post-punk, goth, and alternative music needs this album in their collection. I’m not sure how I managed to go so long without having my own copy but I’m sure glad I do now thanks to this amazing reissue!