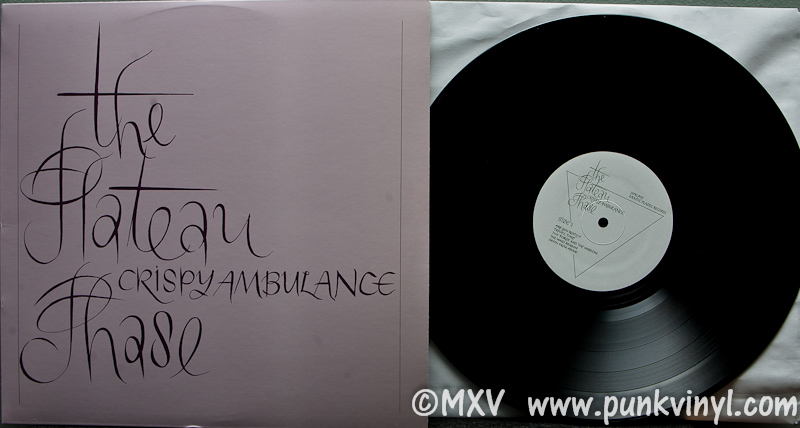 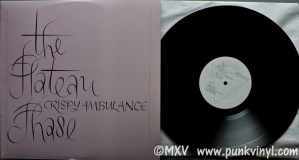 Crispy Ambulance was a band from Manchester, UK that formed in 1977 but didn’t release their first album until 1982. They were label mates with Joy Division on Factory Records and left only a few singles and this one album in their wake before disbanding the same year their album, The Plateau Phase, was released.

Crispy Ambulance mixed some post-punk elements found in their label mates Joy Division and adds more experimental elements like more tribal drumming, slightly more traditional rock elements and a hint of world music. They mix things up in the way The Clash did by incorporating a lot of different influences into their songs while putting their own unique twist on those things to eliminate anything from sounding derivative. They fit in quite well with that early 1980’s Factory Records scene without sounding too much like any of the bands they shared a label or a stage with.  The Plateau Phase is a very interesting and diverse album that at times even bares some similarity to the early New York No Wave Scene and I wouldn’t be surprised if this band was an influence on early Sonic Youth as I definitely hear some similarities.

Much like all Factory Records, if the album didn’t go out of print before hand, it certainly did (on vinyl anyway) when the label folded. Crispy Ambulance’s album has not been available on it’s intended format for well over 20 years. It’s a crime really that it hasn’t been available except for on those stupid silver coasters the music industry forced us all to adopt. Sure they are convenient as you can play them in your car and even use it to set your beer on, but it lacks the charm and the warmth of being on vinyl. That warmth has returned in an excellent way.

The most active reissue label to come around in quite some time, Drastic Plastic, continues their vinyl onslaught with this nicely packaged reissue. Once again you can buy this album new thanks to them, for only a few dollars more than the original would have set you back as an import back when Reagan was president.  The record comes in a full-color standard jacket that looks identical to the original except for the bar code and label information on the back. Inside is a black vinyl 180gm record with labels that match the original pressing too except for the label name/catalog number. It comes inside a poly lined paper sleeve which means the record is extra protected and you won’t find any paper scuffs on the thing thanks to the better sleeve.

As with all this label’s reissues, the record was remastered and sounds better than every. This is a super high-quality package inside and out and another great record to add to anyone’s record collection, even if they own an original copy already. Another job well done Drastic Plastic, please keep it up!