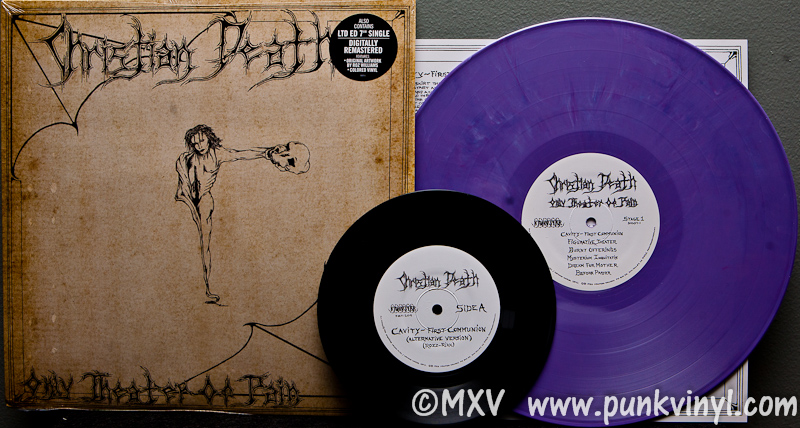 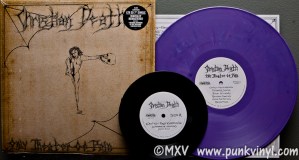 The first Christian Death album was a masterpiece and a very influential piece of vinyl that was way ahead of its time. Nothing sounded like it when it came out and honestly while it certainly helped to pioneer the movement known as goth, I can’t think of any band that really sounds like Christian Death did on this LP. Some have tried but without that magical combination of musicians nothing could really come close.  For me, Only Theater of Pain is one of those rare “perfect albums” that I will play from start to finish without skipping any tracks and actually prefer to listen to in its entirety as opposed to just playing a track or two at a time. Like a lot of great bands though, their time of greatness was short-lived. Sure the band continued with different players and even had another Christian Death splinter off from it and continue on for years but it wasn’t the same, nor was it anywhere near as good. The original Christian Death came and went and left only one album and a compilation appearance in their wake.

It’s rather amazing and scary at the same time to think about the fact that this album is about to turn 30 years old. That is three decades old. It sure doesn’t feel like it has been that long since I was a teenager and I bought this album at a local record shop after hearing their song, “Dogs” on the Hell Comes to Your House compilation. A lot has changed since this album came out but one thing that never changed is how amazing of a record this is and how it has withstood the test of time and is still a better record today than 90 percent of the records coming out these days. They don’t make them like this anymore. Come to think of it, they don’t make this album like it used to be anymore!

In honor of Christian Death’s 30th birthday, Frontier Records decided to give the album a bit of a face lift and a fresh mastering job. The first thing you may notice is that the album has a different cover. This new version sports the drawing and lettering done by the late Rozz Williams (singer/founder of the band) 30 years ago overlaid on an image of parchment. It looks very cool and I like the lettering and the better drawing on this new version better than the original one. The back cover is laid out very similar to the original version except all the song titles are written in a different script and the photos of the band members are larger and more round. The photos are cleaner and reproduced better as well.

Inside this new cover is the LP that is pressed on opaque purple vinyl. The labels have been redone as well and are black and white. There is also a two-sided glossy insert with all the lyrics to the songs and some photos of the band members. The first pressing comes with a limited edition bonus 7″ on black vinyl that contains unreleased versions of “Cavity – First Communion” and “The Lord’s Prayer”. The 7″ comes in a plain white paper sleeve. These versions are not on the CD edition of the album. The LP was remastered from the original tapes and there is a bit of a sonic improvement over the original pressing. It isn’t a huge leap forward in sound quality as the original sounded great but the difference is noticeably better. Everything sounds a bit clearer and the bass lines stand out a little more.

For those of you fools who ditched their turntables years ago when the man told you that CD’s would make the world a better place, you are in luck as there is a CD version of this as well. The CD version has the same artwork as the LP (but smaller obviously) and the cover insert folds open twice to reveal all the lyrics and photos found on the LP insert. The CD was of course remastered too and this new version sees a larger sonic improvement over its predecessor. The original CD was rather quiet and even a little muddy sounding as mastering technology at the time was a lot more primitive and most CDs from that era suffered the same fate. If you own the old version promptly donate it or toss it in the trash and replace it with this new one, your ears will thank you and you’ll be a lot happier.  The CD contains six bonus tracks that comprised the Deathwish EP which was some EP collecting a few demos and unreleased songs (except for “Dogs” which was on Hell Comes to Your House) that only came out on a French label in 1984.

Frontier Records really paid tribute nicely to a very important piece of its history with this new anniversary remastered edition of Only Theater of Pain. The new packaging and mastering job completely warrant the price of re-buying this if you already own a copy (or several if you are like me) and other labels should follow suit when it comes to reissuing material from their back catalog. Vinyl collectors may not want to sleep on this though as this first pressing with the bonus single received a lot of pre-orders and what’s left won’t be around for very long.