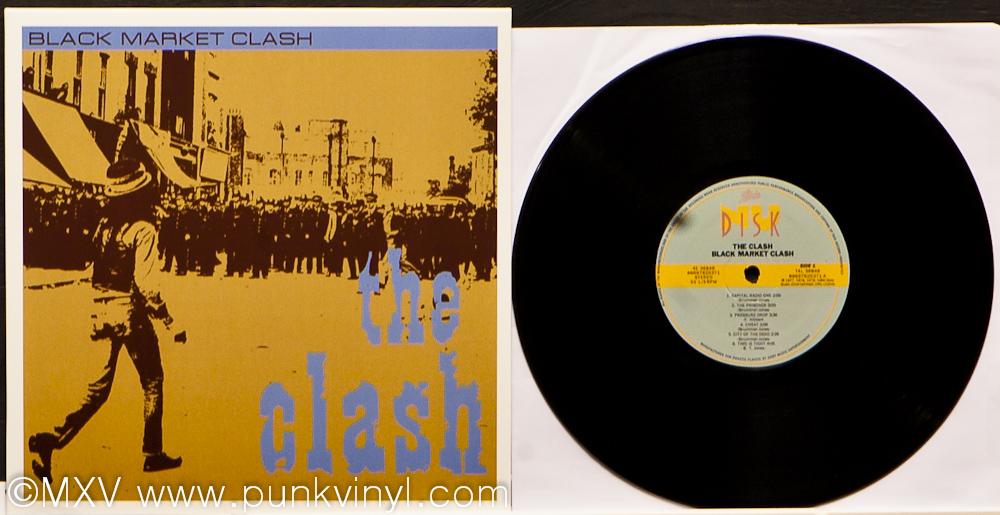 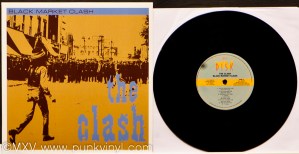 Way back in October 1980, Epic Records in America released an EP that collected a bunch of Clash songs that weren’t available on any releases domestically. This EP was a 10″ vinyl record that was part of Epic’s line of EP’s called Nu-Disk. Cheap Trick was another notable band to have a 10″ on Epic as part of the same line. The 10″ format didn’t seem to make many waves though and Epic quickly abandoned it after the initial wave of releases.

Black Market Clash contains nine songs which total close to 35 minutes in length. It could very well have been a full album considering its running time matches many LPs even today, especially punk rock albums. This EP was released between London Calling and Sandinista which was pretty much the peak of The Clash’s popularity. Four of the tracks were only issued as b-sides to singles released only in the UK between 1977 and 1979 and “Pressure Drop” is a remix exclusive to this EP. “Cheat” was one of the songs omitted from the domestic pressings of the first Clash LP. The b-side of this EP features a new mix of “Bankrobber” that is exclusive to this EP as was the edited version of “Justice Tonight/Kick It Over”.

Musically the material on this EP showed how multi-faceted The Clash were as their punk, reggae/dub and more experimental sides are all showcased in the various songs. It is a really nice sampler of Clash material that was hard to find here in the United States and is a great companion piece to their various full-length albums. The fact that this came out on a 10″ vinyl which is still outside the norm made this release that much more special.

Since the Nu-Disk format didn’t take off it didn’t take very long for the original vinyl of Black Market Clash to go out of print. It has remained unavailable on the vinyl format for close to three decades now. After having done a superb job with their reissues of the first two Clash LPs, Drastic Plastic decided to dip into the Clash discography and reissue this long-forgotten gem in its original 10″ vinyl format! As usual their attention to detail is unmatched.

First the vinyl itself is on 10″ of black vinyl just like the original, unlike the original however this new version is about twice as thick and as a result it is of a higher quality and less prone to warping. The labels are slightly smaller and a lighter shade of blue than the original but aside from that they reproduced them beautifully and the only thing that changed was the statement of being manufactured for Drastic Plastic in fine print at the bottom of the label. They even preserved the catalog numbers and Epic Nu-Disk label artwork on both sides. The cover reproduces the original cover art with the only exception being the addition of a Drastic Plastic logo and barcode to the back cover and new copyright information and contact information at the bottom. The blue they used on the cover was a different shade and the cover stock is of higher quality on this reissue. The mastering job is also a lot better on this reissue and doing a direct A/B comparison reveals this reissue has a much more robust low-end/bass sound and as a whole just sounds a lot more full.

If you are a fan of The Clash and a fan of vinyl, this 10″ is a must-have as it bests the original in every single way and is worthy of upgrading if you happen to have an original copy in your collection already. Kudos to Drastic Plastic for another beautifully done reissue of a long-lost gem.