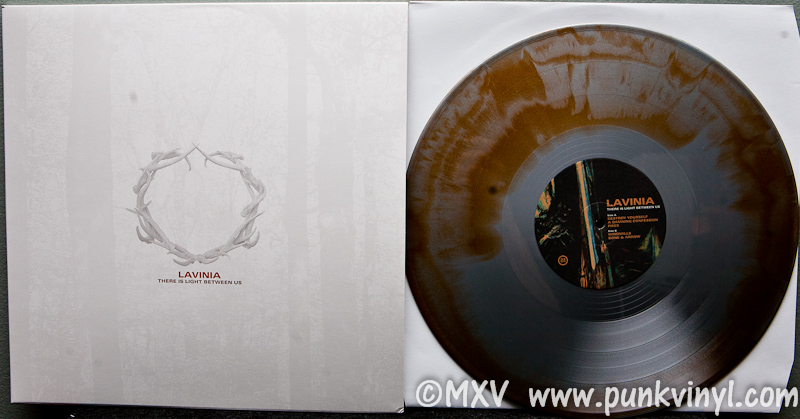 Lavinia – There is Light Between Us

A debut EP so strong that it only loses points for not being a full-length! Eerily soothing yet desolate and complex songs that are nothing short of fascinating.
Rating:

Lavinia – There is Light Between Us LP
The Mylene Sheath

Lavinia is a new band that features members (both past and present) of Eksi Ekso as well as someone from Caspian. The band started when one of the members of Eksi Ekso decided to leave that band due to wanting to go in a different musical direction. This amicable split led to not only Eksi Ekso releasing a new album but this new band, Lavinia, to form and in this case everyone wins.

There is Light Between Us is a five song EP. The band mixes a lot of post-rock elements with some more traditional indie rock and the results are fascinating. Dual layered guitars fit together like a puzzle and at times weave in and out of each other that sort of lull the listener into a calm sort of trance. This is accentuated by complex and driving bass lines that at times is reminiscent of bands like June of ’44 in its delivery. The songs are slower to mid tempo for most of their delivery but at times the songs build to a controlled tension in a way similar to that of modern-day post-rock. These passages are exhilarating and powerful without the use of power chords or thick heavy riffs and as a result have a lot of substance to them.

The vocals are soft and not much louder than a whisper. This sort of raspy subdued delivery give the vocals a sort of eerily calming feeling and along with the atmospheric feeling of the way the songs were mixed, help sell the rather desolate lyrics. The songs are moody as is the lyrical content yet the lyrics are actually rather minimal in each song but convey a lot with few words. The overall songs evoke deep emotions and are like a really good thunderstorm complete with all the bells and whistles. The songs are a bit dark and organic. Evoking feelings in music in this way is no easy task and Lavinia already seem to have mastered this art on their debut.

The record comes in a semi-gloss cover that was printed in full color. Inside there is a 12×12 glossy full-color insert that is printed on both sides. It has the lyrics, band and recording information and some photographs. The heavyweight color vinyl (this particular copy is silver w/bronze colored vinyl that is limited to 300) compliments the colors of the cover art nicely. The mastering job was very clean and warm. The low-end is full sounding and everything sounds great. In comparing the CD and LP versions back to back I have to give the nod to the vinyl, though the CD version is certainly no slouch (it is packaged in a nice digipak).

Lavina’s debut makes me very hopeful that the band will stick around and continue to release records. There is Light Between Us is about as strong of a debut as you could ask for and its one flaw is that it wasn’t a full-length album.