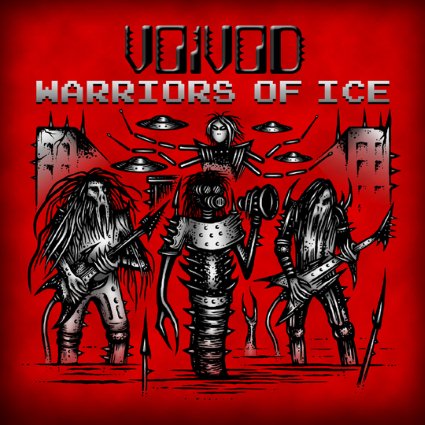 A very strong live album that also serves as a best-of Voivod with its track list that will please long-time fans as well as providing a good introduction for the unfamiliar.
Rating:

In the mid 1980s a little thrash metal band from Canada named Voivod made their debut. In their early years they were a very good band that had really cool imagery and raging tunes. Once they had a couple of years under their belt however is when they really started to transform into something special. The band started getting a lot more experimental and formed a sort of science-fiction metal that sounded like nothing that came before it. Voivod became innovators and put out some of the most diverse and interesting metal albums of the late 1980s into the early 1990s. Voivod is a special breed of band that comes along only once in a lifetime and is nearly impossible to duplicate.

After the tragic loss of founding member/guitarist/songwriter Piggy, the future of Voivod was uncertain. The band decided to continue and released a very good album and started playing shows again with their new guitar player, Chewy. Chewy had some incredibly large shoes to fill as the new Voivod guitarist but having seen the band play with him I can happily report that in the live setting, Voivod are as great as ever. When the band decided to release a live DVD of their first trip to Japan, they played a big homecoming show in Canada to celebrate its release. This show was recorded and finally released as Warriors of Ice.

Warriors of Ice reads like a “best of Voivod” album and the band played pretty much every song you’d want in a Voivod set list. Such classic tracks as “Ripping Headaches,” “Voivod,” “Tornado,” “Tribal Convictions,” and “Astronomy Domine” are delivered with precision as well as many other older and newer tracks. The performance was flawless and the band really plays each song with a lot of enthusiasm. You can tell by the recording that the crowd loved it too. This live album does a great job showcasing what it would be like to see/heard Voivod live currently with Chewy on guitar who does an excellent job playing all the complex guitar lines originally done by Piggy. Having seen the band around the time this album was recorded, it was a nice souvenir of seeing the band play and this is a rare case where a live album is so good that it will get regular repeated listens, almost as much as the studio albums. The performance and recording quality make this a more than worthy addition to the band’s great catalog and is a must-have for fans. It also does a good job as being an entry point to the band for the unfamiliar as the song selection spans the band’s entire career. Here’s hoping to a future that includes many more Voivod performances!

Warriors of Ice at amazon.com

Warriros of Ice on iTunes