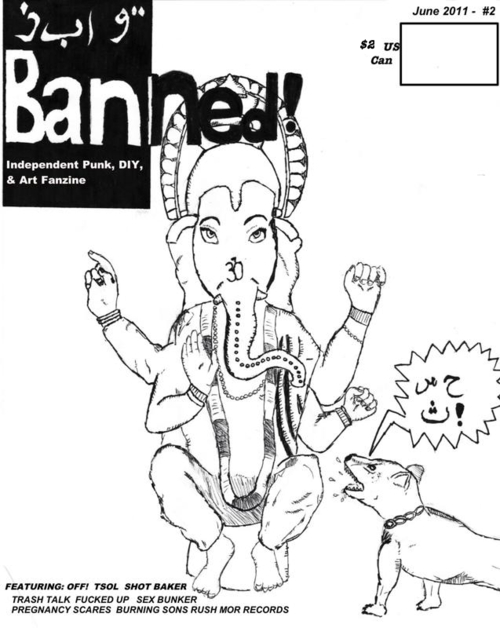 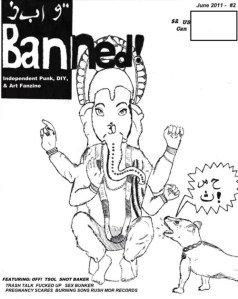 I can’t tell you the last time I saw an actual printed DIY fanzine. In fact the only zines I ever see around anymore are the mainstays like MaximumRocknRoll, The Big Takeover, and Razorcake. When the internet exploded it sort of made printed zines obsolete. Everyone seems to be reading everything online these days. Even I’m guilty of retiring a printed zine only to later start doing an online equivalent. Needless to say that I was pretty stoked when a younger punk came up to me at a show and handed me his fanzine and asked me if I’d review it.

Reading the introduction page and some of the personal commentary in Banned! was like taking a personal trip back through time for me. It was comforting to see that the current generation of punk rockers seem to feel the same way that my generation did during those same years of growing up. It was also refreshing that the zine also was clearly written by people of intelligence. The thoughts, ideas and general writing were obviously well thought out and it shows in nearly every feature of the zine.

The real stand-out of this particular issue is the interview with Dimitri Coats of OFF! This interview was a good length and it was super informative. Dimitri obviously responded well to the interviewers questions because he gave very in-depth answers to everything that was asked of him. Another interesting feature was that the writers would review random records that they picked up at various stores and didn’t stick to just reviewing new releases. Other new reviews, show reviews, photos, and various commentary pieces about social networking and drivers in Chicago fill out the rest of the zine.

For only the second issue, Banned! is already a well put-together zine that had a lot of good reading inside the pages of it. It would be well worth the $2.50 (though in the future they should try to sell ads to lower the cost) to pick u an issue not just for the fact that it is an interesting read, but also as a means to support a couple of guys doing it “old school” when it comes to a zine.