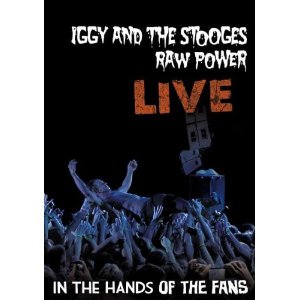 Putting the cameras in the hands of hardcore fans resulted in better than normal concert film. Nice extras and a great performance make this a must for Stooges fans.
Rating:

Last year through an online contest, six fans were selected to film Iggy and the Stooges reunion at the All Tomorrow’s Parties Festival and following the show the same six fans got to meet and interview the band. The results were edited together and released as this DVD called Raw Power Live in the Hands of the Fans.

The reunion saw the surviving members of the Stooges along with Mike Watt (of Minutemen fame) on bass perform the Raw Power album in its entirety which they haven’t done before at any of their previous reunions. They had the good sense to document this event and do something special with the way they went about it. Six fans were chosen and given cameras (what appear to be Canon 5D Mark IIs) to film the show with as they saw fit from where they saw fit. The footage was professionally edited together for this disc and the results are pretty stellar.

Since the chosen photographers were stationed with other fans (as well as on stage) the viewpoint at times make you feel like you are in the audience with them. It puts you in the thick of the action and puts you right on stage with the band. This was done so well that there is a lot less of a disconnect between being a viewer of this DVD and the feeling of it being a concert. Many times live concert films don’t feel as live as they should due to the way they are shot and edited. Putting the cameras in the hands of rabid Stooges fans helped sell the feeling of being there while watching this disc.

The band’s performance was nothing short of excellent. Iggy was a giant ball of energy and flailed, danced, contorted, and jumped all over the place, including out into the crowd on more than one occasion. His vocals sounded great and age has been kind to Mr. Pop which is miraculous considering how wild and reckless he was in his early years. The man must do cardio every day because he never gets winded and has the energy of a young adult. The band played those songs picture perfect and was a really tight, well-oiled machine. If you didn’t know better you’d think these guys were playing these songs together non-stop since the album’s release over 30 years ago. It was an amazing rock show and truly a special performance.

After delivering the entire Raw Power album, the band threw in some other Stooges classics for good measure including “1970,” “No Fun,” “I Got a Right,” and a few more. When the ending credits roll the performance clocked in at around an hour and ten minutes and there wasn’t a dull moment in the entire show. Bonus features include the post-show interview that the six photographers conducted with the band. This feature which was nearly an hour in length was very interesting and the six people asked some really interesting questions that were answered in great detail by Iggy and the other members of the band. This was another example of why it was such a good idea to enlist hardcore Stooges fans to be the ones documenting this event. It was a rare treat to have such a thing take place and be documented and it adds a lot of value to an already nice package.

The film was shot in HD so it is presented in the 16×9 aspect ratio. The image quality was very sharp with great colors and very little noise as the lighting was very good for this show. There is two options for audio: 2.0 stereo or 5.1 surround and both of them sound great, in fact the audio quality is so good that this recording would be worthy of release of a live album. The menus are basic and easy to navigate. The disc comes in a standard DVD case and includes a nice little full color booklet with photos of the band plus liner notes by Mike Watt. It’s a nice little addition to an already great disc.

If you are a fan of Iggy and the Stooges, this disc is a must. It was a top-notch performance plus a really interesting interview segment. It’s a great way to spend an evening and will warrant repeated viewings as it was such a strong performance. Hopefully they will do other “in the hands of the fans” releases in the future as it was a really good idea that yielded great results.