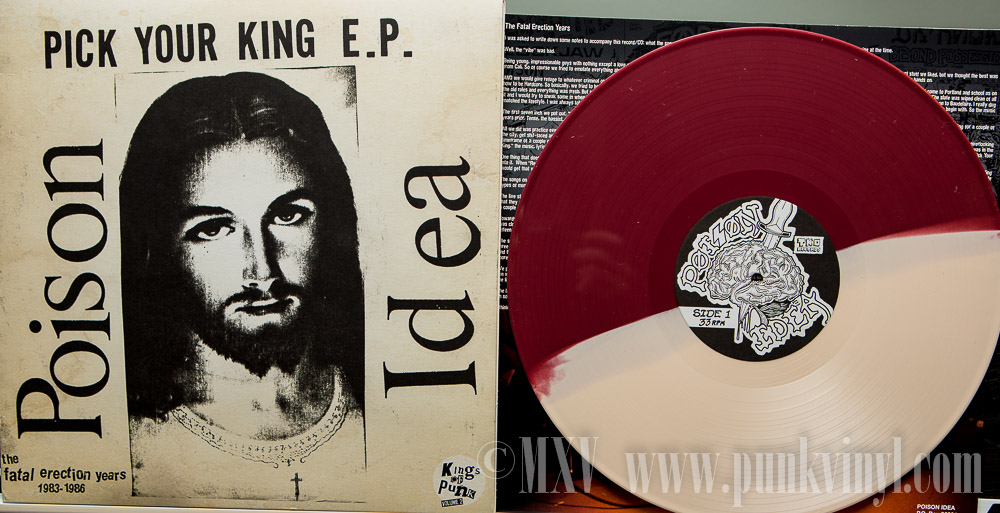 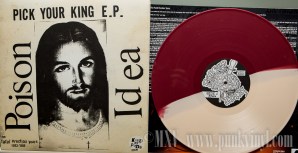 Poison Idea was a hardcore band from Portland Oregon that started in the early 1980s. They were probably single-handedly responsible for putting Portland on the punk rock map. They put out a couple of EP’s and a compilation on their own label, Fatal Erection Records before deciding to stop doing it all themselves and let other people do it for them by releasing subsequent records for the next decade or so on other labels. They never really toured but through word of mouth and word of fanzine they became fairly popular in the world of hardcore punk and they put out some really great records back in their day which have been largely out of print or in and out of print for the last quarter century and become rare collectors items. With so many old punk records being reissued it only makes sense that the Poison Idea back catalog should get some high quality reissues and that people should be able to find this stuff easily and for a fair price. TKO Records (for the vinyl) and Southern Lord (for the non-vinyl) teamed up to make this happen.

Like the title says, this album compiles everything the band self-released on their Fatal Erection label as well as unreleased live material and the material that was released on Pushead’s Cleanse the Bacteria compilation (one of the greatest international compilations of all time). Side one starts with Poison Idea’s debut EP – Pick Your King. This was originally a 13 song 7″. The music is pretty straight-forward and simple hardcore/thrash. It was lightning fast (for the time), loud, powerful and pissed off. The songs were short blasts of fury and while they will admit that they were basically copying the CA area hardcore bands they admired at the time, they did it well enough that they easily stand up as being just as good as some of that and even more aggressive. When it comes to early hardcore EP’s, Pick Your King has grown over the years to legendary status and became considered an influential record in the hardcore genre. It has also become an expensive commodity that trades hands for hundreds of dollars these days for an original pressing.  The rest of side one contains a live recording from The Met in 1983. This recording was unreleased and has incredibly good recording quality. It shows just how powerful Poison Idea was in a live setting and is a great artifact for those of us who never got to see the band play in person back in the day.

Side Two starts off with their second EP, the sarcastically titled Record Collectors Are Pretentious Assholes. The cover art for the original pressing of this 12″ EP features a floor full of rare punk rock records that today would bring in enough money to retire off of if auctioned on eBay. The title was ironic as the band themselves were record collectors and all the records on the cover actually were from Pig Champion’s collection.  The songs on this EP were a little more varied and mature but still hardcore. The songs simply got a little longer and the band could play their instruments better and they were improving as songwriters within the hardcore genre. The real standout on this EP is its final track, “Time To Go” which is one of my favorite Poison Idea songs of all time. It was also a precursor of what was to come on their first LP that followed, Kings of Punk which was an amazing album and the band’s finest moment. The last four songs of side two are the tracks from the Drinking is Great and Cleanse the Bacteria compilations, both of which are things lost in time and will likely never get reissued. The songs fit between the two EPs as far as what they sound like and are great blasts of early hardcore with thick guitars. There’s 31 tracks in all and every one of them is a slice of classic hardcore that remains timeless and still sounds better than anyone playing this style of music currently.

The sound quality of this reissue definitely rivals the original pressings of these EPs (especially Pick Your King which sounds a lot better on this LP due likely to less compression). The record was remastered from the original tapes. The record comes in a full-color (well on the inside anyway) gatefold sleeve. The front cover is the Pick Your King cover art (complete with some water/beer staining and dirt) and the back cover has the Record Collectors Are Pretentious Assholes cover art (which was a little blurry and clearly was taken from a copy of the artwork and not the original materials which are likely long gone).The inside cover has a bunch of great old photos and flyer scans as well as the track list.  There’s a little OBI-like cover that folds over the outer spine that has the track listing on the back side so you can see what’s on this when it is sealed up in a store. The record was pressed on a good quality vinyl and there’s a limited edition colored version that is half purple, half white. The mastering job rivals that of the original records, everything sounds warm and heavy. The record is inside a full-color printed inner sleeve that reproduces the lyric sheets from the two EP’s on one side with all the song credits and release credits on the bottom and the other side has some interesting liner notes by front man Jerry A which he wrote in the future as it is signed and dated 2013!

It’s hard to believe that over 25 years has passed by since I originally bought the records contained on this reissue. What was once thought to be lost in time and only available to those with extensive record collections or large trust funds is now available for a normal price and easy to find which is how it should be. Clearly a lot of care went into this reissue as everything from the packaging to the great sounding mastering job screams quality and it’s nice to see a band of this caliber given the respect they deserve. If there was a reissue of the year category this is certainly looking to be a winner and any fan of early hardcore punk needs to have this record in their collection, even if you own the originals as the nice packaging and the unreleased live material more than warrants the purchase price. Well done TKO/Southern Lord!

TKO Records for the vinyl

Are you a weirdo who doesn’t buy vinyl? There’s a CD version you can get from amazon.com or directly from Southern Lord.