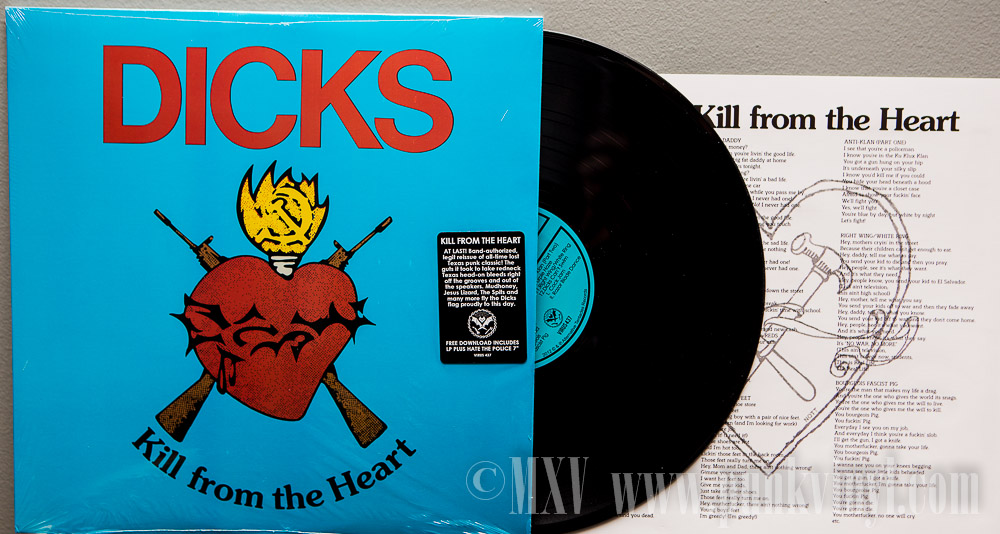 The Dicks – Kill from the Heart LP vinyl reissue 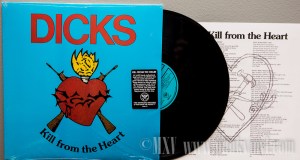 In 1980 punk rock was still in its infancy throughout most of the United States and in some places it was actually dangerous to be a punk rocker. Unlike modern times, back then punk rockers were regularly threatened and attacked for looking different and not conforming to the masses. People didn’t get it and the more simple-minded folks viewed punk rock as some sort of threat. For a band like The Dicks to exist in what many viewed as the redneck capital of the world took incredible courage and that band had it in spades. Not only did the band exist in a time when punk rock was considered dangerous and something to target hatred towards, but lead singer Gary Floyd was openly gay at a time when homophobia was running rampant, especially in a place like Texas.

The Dicks were among the first wave of Texas punk and that state had an amazing track record of producing amazing punk bands in the early 1980s. The band also had a unique history as they existed in two incarnations in as many cities. The first version of The Dicks put out a 7″ called Hate the Police, a split live LP with fellow Texans The Big Boys,  and an LP called Kill from the Heart before disbanding when singer Gary Floyd packed up and moved to San Francisco and formed a new version of the band that also put out a 7″ and an LP before packing it up for good. With the exception of their second LP, These People which remained in print for most of the 1980s, all the other Dicks records went out of print rather quickly and remained that way for nearly three decades.

Kill from the Heart was originally a co-release between SST and Enigma Records back in 1983. Both of those labels were fairly big at the time as far as independent punk labels went. For whatever reason though this record had a single pressing and then went out of print and was ignored ever since. Neither label reissued it and the album and the music was unavailable to anyone who didn’t get it at the time or found a rare used copy somewhere. At some point in the late 1990s an inferior bootleg LP of this surfaced for a bit and at one point a Dicks collection CD came out on Alternative Tentacles that included part of this LP. So many years had passed with the Dicks discography getting ignored that it seemed unlikely that it was ever going to see a proper reissue. Thankfully Alternative Tentacles finally righted the wrong of The Dicks records being extinct and has reissued both of their LPs.

Kill from the Heart is an all time Texas hardcore classic. The band was raw and fast but had a bluesy influence and a unique, diverse sound. They were angry, loud, and confrontational. They were the kick in the ass that music needed at the time and they paved the way for countless bands that followed. Side one of this album is as good as hardcore punk gets circa 1980 and side two was the more experimental side which was equally good and even more challenging of people’s expectations. It even includes a punk rocked out cover of “Purple Haze” and a long jam that closes out the album. Had this album remained in print for all this time it would be as common in records collections of punk fans both old and young as Black Flag’s Damaged.

Alternative Tentacles really did this reissue justice. The vinyl reissue preserves all the original artwork. It looks every bit as good and sharp as the orignal though the blues and oranges are slightly lighter in shade. The only other differences are the label information and bar code on the back cover. The label artwork and layout on one side is similar to the orignal and uses the same artwork (a band photo on the top half) but this time the label is blue instead of pink and of course the label info was updated. The side two label is the standard AT bat logo. The track list and order remain the same but whereas “Purple Haze” was the last song of side one on the original, it is now the first song of side two on the reissue. The record comes on black vinyl and they reproduced the original two-sided lyric/photo insert but one-upped it by making it bigger, added a spot color to it and printed it on nicer, glossy paper.  The vinyl edition comes with a download code for mp3s of the entire album as well as the Hate the Police 7″ (which was reissued on vinyl by a different label). Buying the vinyl edition gives you the best of both worlds as you have the LP on the superior format, plus the digital files for your iPod/iPhone along with the bonus tracks. The record itself sounds louder and a little hotter than the original pressing when playing them side by side to compare. The guitars have noticeably more punch to them and are easier to hear than on the original which is likely attributed to the mastering job then compared to now.

The label did a great job on this reissue and it’s really about time this LP was made available again as nearly 30 years is way too long for any classic album to be out of print, let alone unavailable even digitally. Thank you for righting that wrong AT. Those looking to fill the hole in your life that not owning this LP has created you can either find this at any local record store with good taste or get it directly from Alternative Tentacles Records.