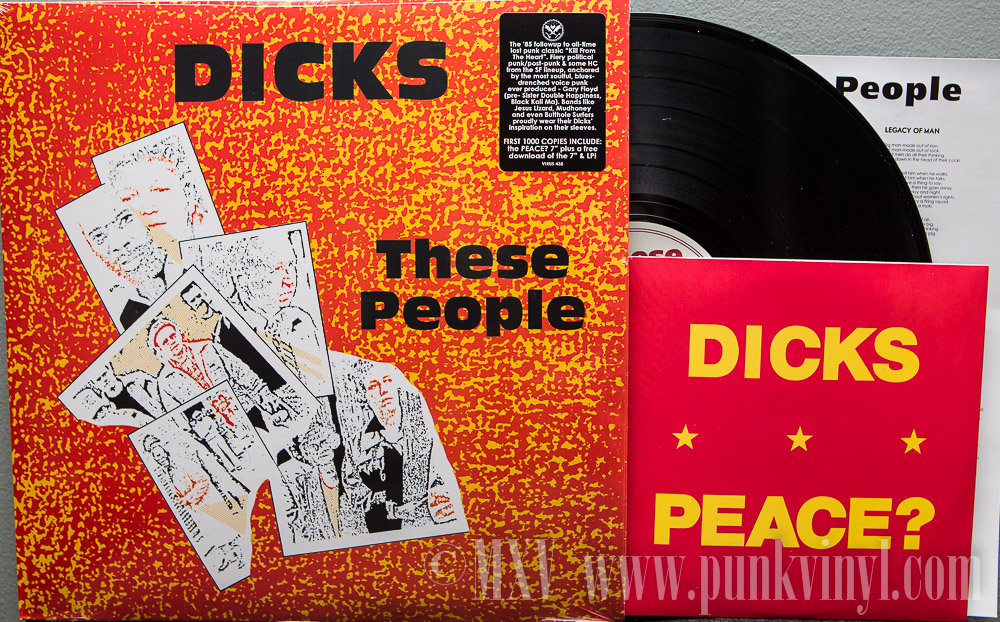 The Dicks – These People LP reissue 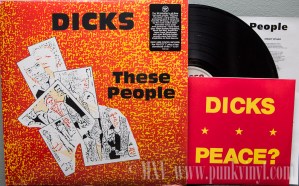 Around the time that the first Dicks LP, Kill from the Heart, was released that version of the Dicks ceased to exists. In 1983 Gary Floyd packed up and left Texas and moved to San Francisco. It wasn’t long after his arrival that he started a new version of the Dicks with all new members. This new Dicks took the sound of the first version and expanded on it a bit. The music was still punk rock and loud and abrasive. It still had that bluesy edge to it as well. What changed was they got a bit more experimental and slightly more accessible. The songs were a bit slower and a few were more melodic. Gary’s trademark vocal bellowing was still the same and this slight shift in sound actually gave him a little more range with his delivery and he had a great blend of aggressive and tuneful delivery.

Much like Dicks version one, this version of the band’s studio output consisted of a 7″ EP (Peace?) and an LP (These People). The former was released on R Radical Records (another TX to SF transplant) while the latter was released by Alternative Tentacles.  Both records were available for a lot longer than the first two Dicks records, especially These People but like all good punk rock records they eventually went out of print. Just like the early material, the later material never received a complete reissue and only a few select songs were including in that Dicks CD that Alternative Tentacles released a long time ago. That has now changed as Alternative Tentacles just reissued These People on vinyl as well as digitally.

The cover art remains mostly the same with only a few minor differences noticeable. The ink color doesn’t quite match and the reissue has a more yellow back and front which makes the whole album look brighter. The photo on the back is also brighter and has slightly blown-out highlights but they must have used an original photo or a really good copy because there’s no moire pattern that would indicate them just copying it from the old printed cover. The typesetting on the back cover was all redone very similarly to the original including the font style  but the credits were all moved up to make room for the record label logo and address which moved from the right corner to the left so they could put a bar code on the bottom right corner.

The record itself is on a thicker black vinyl than the original and has some nice heft to it. The label art remains the same but is printed on a different color paper. The catalog number is also different as is the copyright. The record was re-cut and this reissue actually has a slightly better overall sound quality in an A/B comparison with the original pressing. This new issue has a more full low-end sound which is especially evident in the drums on “Cities are Burning”. The record comes with a reproduction of the two-sided lyric sheet which this time is on a nice glossy paper as opposed to the cheap paper that was used on the original.

As if a better sounding vinyl reissue wasn’t good enough to justify the purchase price, the first 1000 copies of this record also come with a reissue of the Peace? 7″! This reissued version has a full-color, thicker cardstock sleeve that was a nice upgrade to the flimsy glued pocket sleeve of the original. The artwork was obviously sourced by copying a sleeve off an original pressing as the moire patters in the photos on the back sleeve are a dead giveaway. The label on one side has a similar look and style of the original pressing with obvious label/information changes and the other side has the bat logo label. It too comes with a glossy lyric sheet.  The record also comes with a download code to give you the digital files for both the LP and the 7″!

Alternative Tentacles did as good a job, if not better with this vinyl reissue as they did with the first Dicks album which makes picking up the set a no-brainer as between the two you have the entire Dicks studio catalog both on vinyl and digitally for your iPod and the cost of entry is less than the cost of any one of the original pressings of these records on the collectors market. The Dicks were an essential and influential punk rock band whose catalog was as strong as you could have hoped for in those times and it is really great that this stuff is finally available in its entirety in such attractive and inexpensive packages.