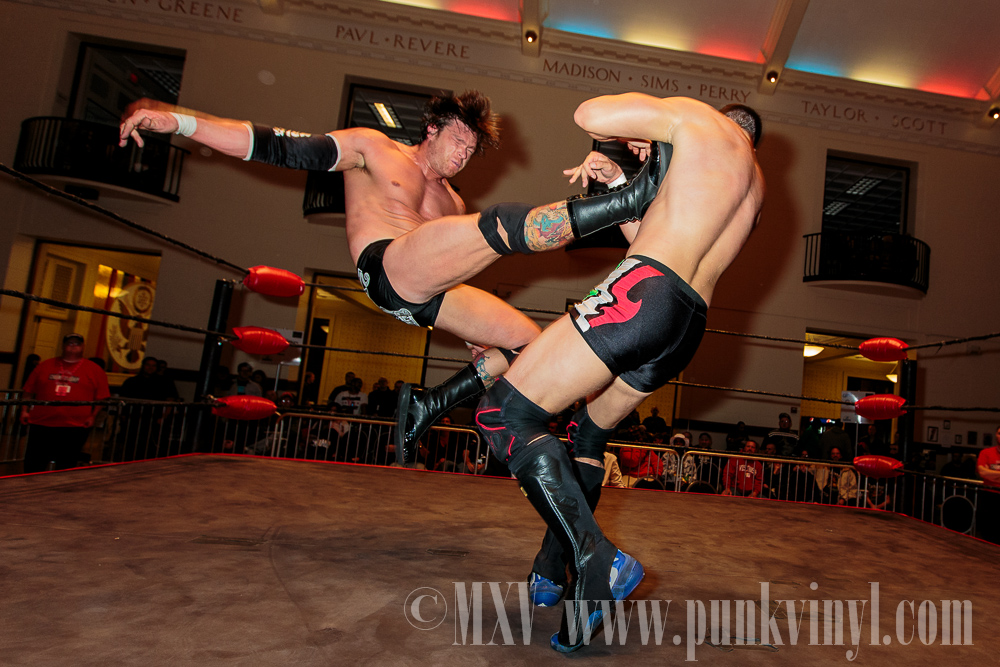 Resistance Pro Wrestling took the show on the road and went up north to Racine WI for their latest event: Point of Entry. Not only was it the fed’s first show outside of Chicago but they partnered up with Great Lakes Championship Wrestling (GLCW for short) for the event. Each federation presented four matches in the Racine Memorial Hall to a room full of wrestling fans. The event drew a large crowd and both companies put their best foot forward with their respective matches.

The event started with Nikki St. John and Melanie Cruise continuing their feud over the now vacant Resistance Pro Women’s Championship. The Baron Brothers (owners of RPro) made a match for the title between the two ladies to determine who is the rightful champion. After Lou E came to the ring and a lot of bickering and banter between the Barons, the ladies and Lou, the match got underway with Lou outside the ring acting as Nikki’s manager. The two ladies started scrapping immediately and when they made their way to the ropes and the referee tried to break them up he got shoved away by Melanie for his troubles and called for a disqualification. The Barons called bullshit on that decision and ordered the match to be restarted. The two ladies spent the next ten or so minutes trading moves and kicking the crap out of each other and neither one of them kept the upper hand for very long and they eventually started scrapping in the ropes again which led to a similar scenario. First Nikki pushed the ref away, then he came back when Melanie was in control and she pushed him off. When they were tied up in the ropes for a third time he tried to get between them and break them up and they both pushed him down on the mat. The ref called for the bell and disqualified both ladies much to the disappointment of the entire building and to the disgust of the Barons. They declared that at the next RPro show they two ladies will be fighting once more for the title in an “I Quit” match but not before Lou came in and clocked Melanie in the back of her head with an ancient cell phone after she gave Nikki a post-DQ beating.  This has really turned into a hot feud and their next match should be something even better.

In the last of the semi-finals in the year-long tag team tournament, Rising Sun defeated “King of the Dark Matches” Chris Castro and Matt Knicks. Rising Sun were the clear babyfaces of the match and won the crowd over quickly with their lucha style and fast flying moves. This match was heavy on the action and was fast paced from start to finish. There was a couple of awkward moments here and there but the good outweighed the bad and it was a fun match and Rising Sun are easily going to be fan favorites in the finals next month.

The interim commissioner for GLCW came out to announce their main event for the newly vacated title (thanks to Al Snow not being able to make the show). This led to Robbie E, Armando Estrada and Mr. Anderson coming to the ring and arguing about who deserves to be the new champion. After the three made their demands and trades insults it was set that they’d fight in a three-way match for the title as the evening’s final match.

And speaking of three-way matches, Bobby Lashley, The Ego Robert Anthony and Lonesome Jay Bradley faced off in a three-way elimination match for the Resistance Pro Heavyweight Championship. The belt was the property of Harry Smith but he chose to stay in Japan and mailed back the belt as it was stripped from him for not defending it within 60 days.  Bradley and Ego took turns trying to take out Lashley to cut off their every attack and tossed them around like he was superman. When Ego was in the ring being overpowered by Lashley, Bradley came in from behind and when Lashley turned around Bradley nailed him with the Boomstick Lariat and pinned him, eliminating him from the match. After tossing Ego outside and then berating the crowd while proclaiming “I just beat Bobby Lashley”, Ego and Bradley continued fighting each other in order to determine the new champ. These two guys are the top two superstars in the company and it showed once again in a match with some exciting spots, good tension and even some out of the ring action. When it looked like Bradley was going to win, Ego rolled him up in a small package that surprised him just long enough for the referee to count three and Ego was crowned the new RPro champion.

Matt Longtime (with Chazz Moretti in his corner) defeated Mason Moonshine in what was almost a handicap match for Mason. First he was about 1/3 the size of Longtime and it showed when Longtime shrugged off his initial attempts at offense. Mason started to get something going by using his speed to his advantage but Moretti tripped him when he hit the ropes to attack and that gave Longtime the opening he needed to nail his finisher on Mason and win the bout.

Super heavyweights Xavier Mustafa and Tony Scarpone took on Ruff Crossing and Zack Gowan in a tag match. WWE fans may remember Gowan as the one-legged wrestler. Mustafa annd Scarpone are two huge guys and the two together make for a brutal team that could likely pound their way through most tag-team divisions. Gowan is a much smaller wrestler but he can move around and wrestle amazingly well for having only one leg. After some quick tags between both men, the big guys overpowered Gowan and took turns beating on him for a very long time. It was painful to watch at times seeing these huge guys beating the crap out of a guy with one leg. Scarpone even mocked him by making like he was going to put him in a figure-four and a sharpshooter and then reaching for the missing leg and then giving up the attempt. Eventually Gowan was able to make the hot-tag to Ruff Crossing who came in shot out of a cannon but was quickly double-teamed which killed his momentum. There was a lot of double teaming and even some cheating from Rinaldo Piven (who was managing the monster duo) and the ref disqualified Scarpone/Mustafa while Piven ran off with Gowan’s prosthetic leg (which he takes off and puts under the ring before he wrestles).

Adam Pearce put his NWA title on the line against Rhyno. These two big guys brawled all over the ring and traded holds. Rhyno had a lot of fans in the audience who cheered for him any time Pearce was in control. Rhyno got some good offense going and went to tackle Pearce who ducked out-of-the-way which resulted in Rhyno nailing the referee. With the referee down, Pearce reached deep into his trunks to pull out a foreign object which he used to hit Rhyno with and covered him. A second referee came to the ring and counted three but the match was ruled a DQ due to Rhyno hitting the original referee. An enraged Rhyno got a little revenge by hitting Pearce with a Gore.

Ashton Vuitton with his new male companion, Eric St. Vaughn, took on Mr. 450. Ashton took the mic and cut a promo which got him some heat with the crowd and after he made Eric take off his coat, he ordered him to spray down and clean the referee’s hands after he checked Mr. 450 because he didn’t want to be soiled by the ref’s dirty 450 hands. This made the crowd hate him more. When the bell rang the two had a fast-paced match that had 450 getting in some offense before being cut-off by Ashton who gave him a good beating for a bit. 450 started to come back when the two spilled outside and he nailed Ashton with a suicide dive. When they got back in the ring and 450 was going to attempt his finisher (which is also his namesake), Eric hopped up on the apron and threw Ashton’s fur coat over his head. This gave Ashton an opening to kick 450 in the head and mount a comeback. Mr. 450 was able to score the victory after some smart reversals that gave him the opening he needed to go up to the top rope and hit his finisher. When the bell ran, Eric St. Vaughn was so worried about Ashton’s well-being that he threw the fur coat on the floor and ran into the ring to help him up. When the two got out the ring and Ashton saw his coat laying there on the floor, he chastised Eric for letting it touch the floor and picked it up and stormed off. There was a lot to like about this match and the entertainment factor more than made up for a couple of spots where the timing was a bit off.

The final match was the three-way title match for the GLCW title. Armando Estrada and Robbie E formed a temporary alliance to try to take out Mr. Anderson but that was short-lived as the two started fighting about who was going to attempt the pinfall after they’d knock Anderson down. This led to Anderson taking charge and separating the two. Robbie E spent a lot of time sitting on the turnbuckle and letting Anderson do most of the work in hopes of swooping down like a vulture and picking the scraps of victory which is almost exactly what he did. When the match was over and he fled the ring with his new title, Anderson got a little revenge on Armando by smacking him in the balls and then hitting him with the mic check.

Point of Entry was a pretty solid show and had good efforts by both companies. It was neat to see two good indie companies team up to put on a big show and hopefully there will be more of it in the future. They certainly gave the fans their money’s worth with this low-priced and entertaining show.