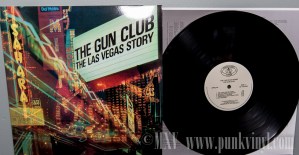 The Gun Club was a blues and country infused post-punk band from California that was around in one form or another from 1979 – 1996. The band was founded by guitarist/vocalist Jeffery Lee Pierce who the band OFF! has a song about that they play at every show as Jeffrey was Keith Morris’ best friend. The band was rather ahead of their time in regards to their sound which took punk roots and infused them with a lot of blues and some country influences. The results were largely influential in the psychobilly and alternative rock bands that would follow for years to follow. The band released seven studio albums plus a healthy amount of singles and compilation appearances before Pierce’s untimely death in 1996. The band’s first and third albums are the two favored among Gun Club fans and that third album, The Las Vegas Story has just been given a very nice vinyl reissue.

The Las Vegas Story was a bit less punk than its predecessors but is probably the most well-rounded album in the Gun Club discography. It beautifully takes a hint of post-punk and rock and mixes in a lot of blues and a hit of country. If played faster it would borderline on what is modern psychobilly at times and it’s easy to see how this album was a likely influence on such bands as Social Distortion (post-1983) and a lot of more modern alternative rock acts of the 1990s. The album is a great listen from start to finish and if you only were able to own one Gun Club album this would be the likely choice. The album originally was released in 1984 by Animal Records which was a label started by Chris Stein of Blondie. The lineup of The Gun Club on this album featured Jeffrey Lee Pierce, Kid Congo Powers (formerly of The Cramps), and Terry Graham and Patricia Morrison (formerly of The Bags). It makes sense that one of the two best Gun Club records featured such a stellar lineup of punk luminaries.

The record had been reissued on CD in the past but I’m pretty sure there hasn’t been a vinyl edition of this since it was originally released in 1984 and like all good records at the time it eventually went out of print when labels stared trying to murder the vinyl format in favor of the more profitable CD format. Now this fine album is once again available on vinyl thanks to Drastic Plastic Records. Followers of this site will be familiar with the label as over the past couple of years they’ve done a bunch of vinyl reissues that have had two things in common: great albums and overall great packaging/mastering that sometimes rivals the original pressings. In keeping with tradition, the label spared no expense in the quality for this reissue.

The LP comes in a full-color, high gloss sleeve that reproduces all the original artwork beautifully. The colors are vivid and the type and images are sharp. The back cover was changed slightly in that they replaced the old label information with the new and they added the bar code. Inside there is a black and white printed inner sleeve that has the lyrics to the songs printed on them. The record isn’t housed in that however, it is instead in a poly lined paper sleeve. The record itself has black and white labels and either comes on 180gm black vinyl or 140gm green and white marbled vinyl. The marbled vinyl color compliments the cover art nicely. The record was remastered and the mastering is superb. The sound is full and the quiets are ultra quiet. I could tell no discernible difference in sound quality in playing the two variations back to back so while I prefer the colored vinyl for its aesthetics, those audiophile types may want the 180gm for its heft and it being a little less prone to warping. Each variation is hand-numbered on the back cover. They made 500 of each. Completests of course will have to get both!

Once again Drastic Plastic hit a home run with this reissue. Hopefully this does well enough for them that it inspires them to reissue the first Gun Club record to go alongside The Las Vegas Story but regardless of that  this record is well worth the price of purchase.