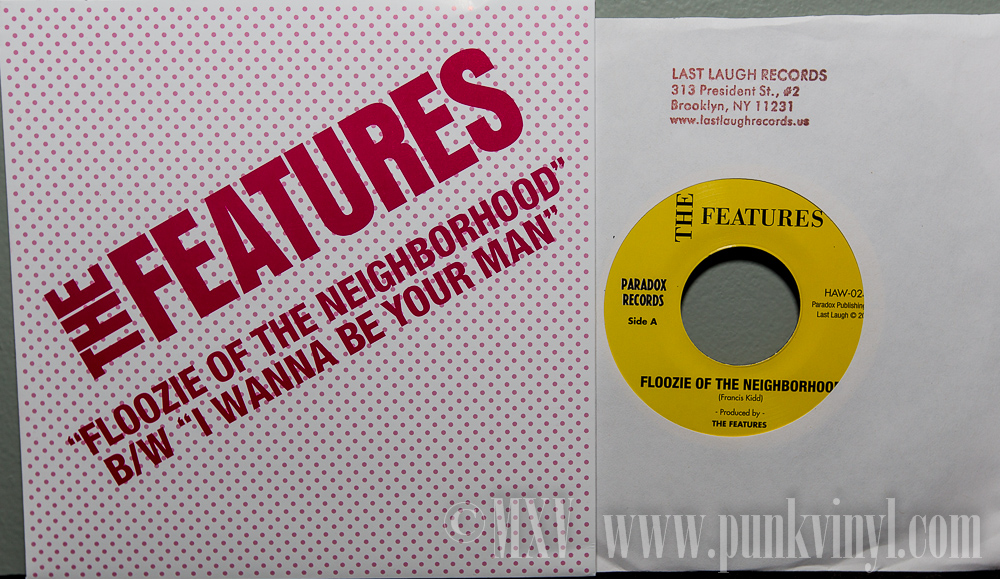 The Features – Floozie of the Neighboorhood 7″ vinyl reissue 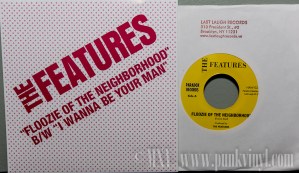 If there’s one thing that I’ve learned in three decades of collecting punk records is that for every great record I’ve heard or owned, there are dozens that I’ve never heard of or missed out on due to their obscurity and rarity. The sad result of this is that a lot of great records flew underneath not only my radar but the radars of the general punk rock populace and that most of that music will go forgotten to all but the most die-hard and thorough collectors. Some of the best punk records I’ve heard in the past ten years were records that came out over two decades earlier or more that I simply never heard of until either one fell in my lap, someone more knowledgeable than me turned me onto it, or some label reissues it and breathes new life into some forgotten gem. In the case of The Features 7″, the last scenario is what turned me onto this record and band.

The Features was a late 1970s’ punk band from New York. They put out a two song 7″ single on Paradox Records called “Floozie of the Neighborhood”. They probably made a few hundred of them tops and then the record went away and was mostly forgotten. It never made a big impact at the time and it’s likely most of the copies made didn’t make their way outside the general area until decades later when hardcore obscure record collectors caught wind of this single. And what a single it is!

“Floozie of the Neighbood his a punk/power pop song that is fast tempo, somewhat simple yet very catchy. It has a raw sound and the vocals sound a little snotty in their delivery and bear a similar resemblance to Iggy Pop’s vocal style. The song is everything great about late 1970’s punk rock and had this record come out on a bigger label then people likely would have latched onto how great it is. The song easily ranks up there and fits in with anything on the Dangerhouse label. The B-side has a great punked out cover of The Beatles’ “I Wanna Be Your Man” which is played in a similar temp and style to the original A-side.

Original copies of this forgotten vinyl treasure fetch a lot of money on eBay but now you don’t need a trust fund or a suitcase full of disposable income to own this two song classic. Last Laugh Records has just given this a very nice vinyl reissue. The record comes in a thick, glued picture sleeve that reproduces the original almost exactly except it is likely printed on better stock and the label information on the back cover has changed. The 7″ comes on black vinyl and has yellow and black labels that reproduce the look of the originals nicely. It sounds fantastic and if it wasn’t for the label reissuing this record I likely would have gone my whole life without ever hearing it and I’d have missed out on an amazing punk gem from the early days.

Kudos to Last Laugh for making this great and mostly unknown punk masterpiece available again and thanks to them for turning me on to something I missed out on without having to sell a kidney just to have a copy in my record collection. This is as good as 1970’s punk gets and I highly recommend this single to anyone who likes old punk rock, especially if you are a fan of old punk labels like Dangerhouse as The Features would have fit right in there had they lived on the other coast back then. Don’t waste any time in picking this up before it becomes unavailable once again!