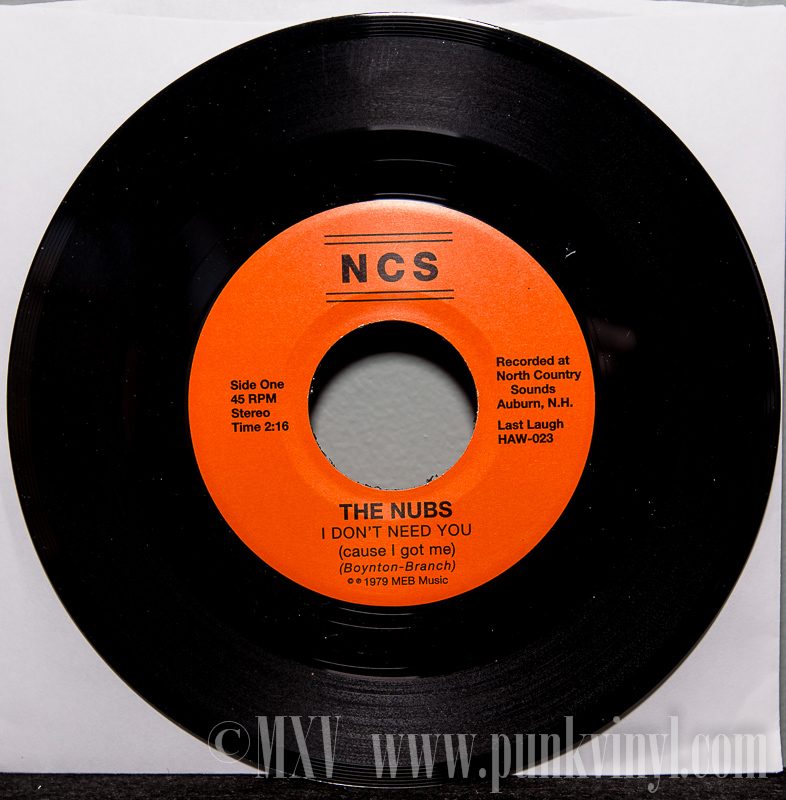 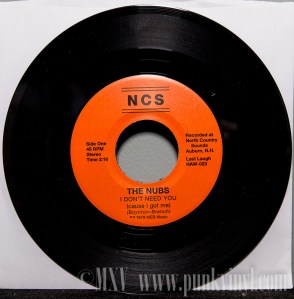 New Hampshire wasn’t known for producing many punk rock bands. In fact other than the fact that GG Allin originated from there I can’t think of any other bands from that state that I have ever heard of. Before GG Allin though there was a band called The Nubs who put out a 7″ way back in 1979. If it wasn’t for the fact that this 7″ arrived in my mailbox (along with some other great reissues that have been featured or will be featured on this site shortly), I’d have probably gone my whole life thinking that New Hampshire produced exactly one punk band. Thankfully I’ve been educated thanks to Last Laugh Records!

The Nubs put out this 7″ in 1979 on the NCS label. They likely pressed a couple hundred of them at best and I have no idea if they ever released another record in the years they remained a band. “I Don’t Need You” is another prime example of everything that is great about obscure, “”killed by death” style punk singles. It’s a mid tempo song with buzzing, fuzzed out guitar that is a bit like the Mentally Ill. Think of a guitar player trying to reproduce the fuzzed out keyboard sound of early Suicide using his guitar and effects pedals. The song packs a good punch, has good attitude and is really catchy too. This is another classic example of great punk rock that for whatever reason didn’t catch on and it’s once again likely due to the fact that they made so few of them. The flip-side, “Dogs” is completely different. It is a keyboard driven song that is a cross between new wave and psychedelic 60’s. The song is told from the point of view of a dog and it is pretty humorous. Being a fan of keyboards and some new wave stuff I found the song to be pretty charming but the die-hard punks may scoff at it. Even if “Dogs” isn’t your cup of tea, “I don’t Need You definitely will be and is well worth the price of purchase and absolutely justifies this record being reissued.

Last Laugh Records really has an amazing ear for great and super obscure punk. These guys have been on an amazing hot streak of reissuing some really great, obscure, and expensive punk records and making them available once again for people on a normal budget. This 7″ was made from the original analog tapes so it will sound identical (or perhaps better) than the original 1979 pressing. The record comes on black vinyl in a plain white sleeve (as originally issued) and aside from some added information for Last Laugh Records, it looks nearly identical to the original pressing (based on photos of a copy I found on the internet). This is a great little single and it is going to get a lot of regular rotation on my turntable for years to come and will likely be a staple of the modern equivalent of punk mix tapes I make myself for a very long time! Do yourself a favor and pick up this tasty little slab of vinyl while it’s around for a fair price, and one far cheaper than tracking down an original pressing on eBay or from some collector.