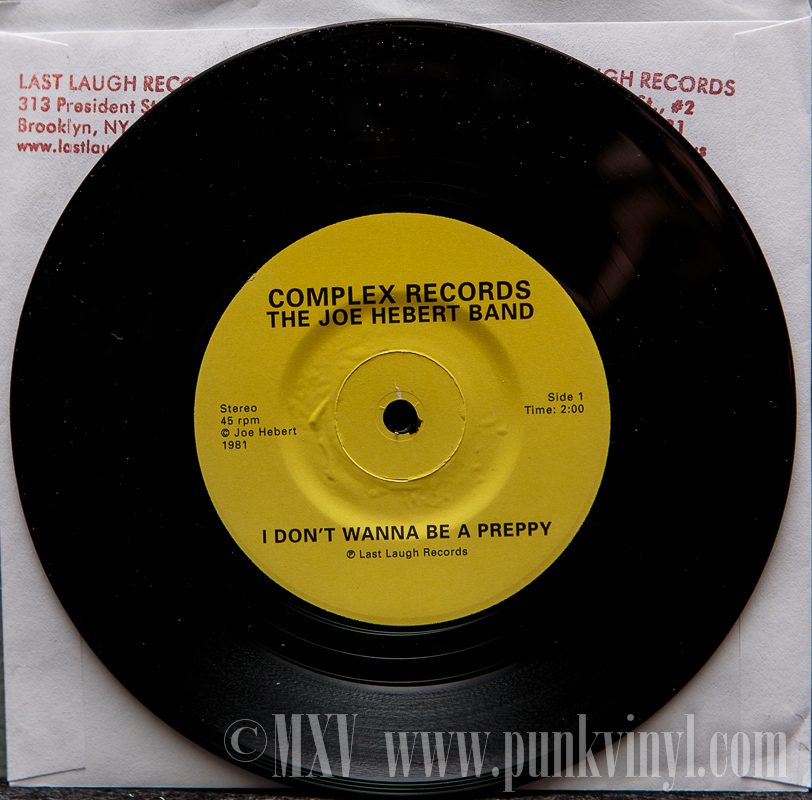 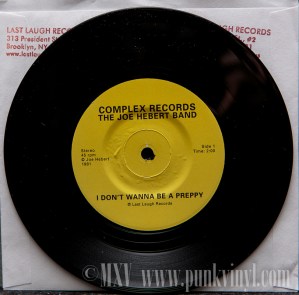 In 1981 a fellow by the name of Joe Hebert who would later become a comedian, graduated from a Rhode Island high school and decided to make a record. He enlisted some musicians from a local band called The Tits and released a two-song single. They made very few of them and it wasn’t even a blip on anyone’s radar and as a result far fewer copies than what was originally produced actually survived and that is a similar story as so many great and obscure punk records that now are worth more than their weight in gold. The latest great undiscovered gem is this two song single that has been rescued from obscurity or at least rescued from only being in the hands of the lucky few who snagged an original copy.

“I Don’t Want to be a Preppy” is a short, fuzzed out punk song with a steady, driving beat, distorted fuzzy guitars and bass and vocals laced with attitude. The lyric subject is perfect for the time that this was recorded as preppies were the polar opposite of punk rockers and being a preppy was standard fare for those in the mainstream at that time. The song is a two-minute blast of punk rock gold. It’s no wonder why the few known original copies out in the wild trade for excessive sums of money. The flip-side, “First Date” is a slower number but still a catchy tune and is as fuzzed out as the A-side. It’s more of a traditional new-wave type of song with a harder edge due to all the fuzz. While it won’t get as much repeat listens, it is a good compliment to the amazing A-side and you really couldn’t as for better punk/fuzzed out power-pop than these two gems.

A label that has become synonymous with obscure punk rock gold, Last Laugh Records, has unearthed punk gold again with this reissue. As always, the label made the record look as close to the original as possible with only minor differences. The record is pressed on black vinyl and comes in a plain white sleeve (as originally issued). The black and yellow labels look identical to an original with the only difference was adding the name of Last Laugh Records underneath each song title. The music itself has aged amazingly well and there needs to be a special heaven for labels like this who go through the time and expense to bring back these lost nuggets and present them for a regular price to those of us with great musical taste but no massive stockpile of cash to track down and purchase an original copy through the secondary market.  Buy this record immediately and make sure to thank the label for allowing us to hear and own what we missed for the price of a fast food dinner.

Listen to the song right here and then go order yourself one!