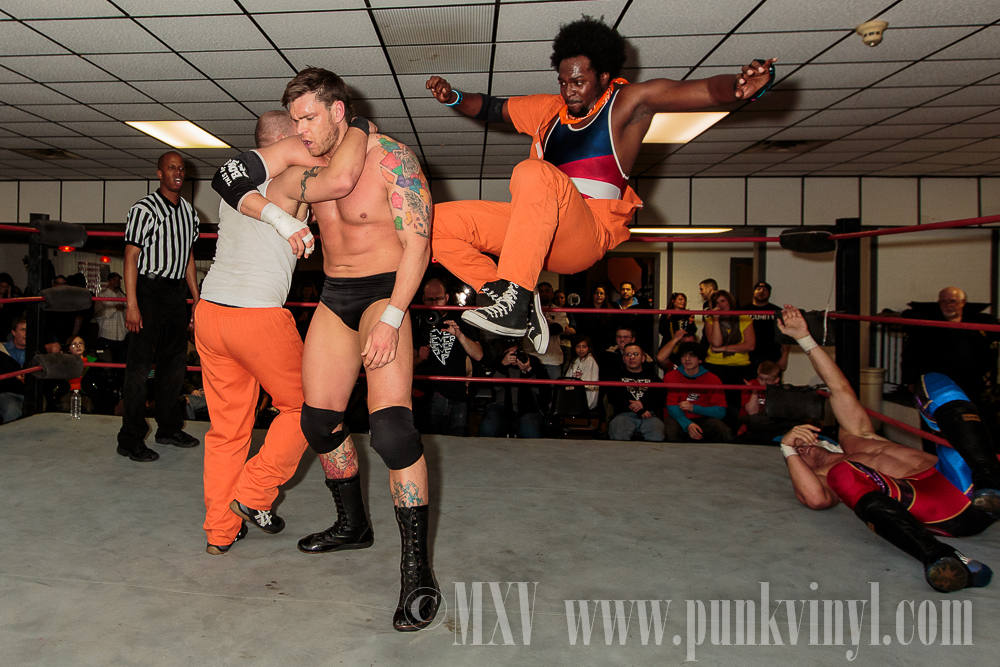 Sunday afternoon, Resistance Pro Wrestling held their latest event in Lockport titled Among the Living. This wasn’t a typical RPro show, this show was the Sam Thompson memorial benefit show. Sam worked for Resistance Pro from the time it started until his untimely passing last year which rocked the entire company. Sam was universally loved by everyone in the business and everyone who ever spent more than 5 minutes with him and was one of the strongest people on the planet. Everyone who worked the show donated their pay and their time for this special cause and there was a great feeling of unity in the building.

In the first of two pre-show matches, GQ wrestled Dustin Rayz. The match lasted about five minutes and GQ got the win.

Two female newcomers to RPro faced each other in the second match. Crazy Mary Dobson and Miss Natural locked up in a short match with a lot of trash talking between the two ladies as they traded holds and blows. Crazy Mary, the fan favorite in the match, emerged victorious.

In the first tournament match, Brady Pierce defeated Backwoods Brown. Both of these guys were very big dudes with Brown being the larger of the two. Brown tried to wear down Pierce with a series of bear hugs but Pierce managed to break free and then knock the big man down with a clothesline long enough to get the pinfall and advance.

In a three-way match, Mr. 450 defeated Chris Castro (king of the dark matches) and Remi Wilkins. This match was a lot of fun that featured a makeshift alliance and then plenty of bickering between 450 and Castro who really had good chemistry. Solid work by all three participants and the crowd really enjoyed it.

JT Dunn (who had a very effeminate demeanor and thinks his body is a lot more ripped than it really is) faced Pondo in the second tournament match. Pondo is basically the caucasian version of New Jack as he came to the ring with a stop sign which he used to get himself disqualified. After the bell rang he grabbed his bag of tricks and pulled out various devices of violence that he used to damage Dunn, mostly around the crotch area. These tools included a staple gun, a saw blade on a stick and a fork in an electric drill.

The Baron brothers came to the ring to give a speech about Sam Thompson and a thank you to everyone. They brought the Thompson family into the ring as well and it was a very touching moment as they shared memories of Sam and thanked everyone for their support and kind words. It was a very “real” moment that is a rare thing to have in a wrestling ring and a lot of people welled up in tears.

In the third tournament match, John Malus defeated Stonewall in a short brawl of two dudes who you wouldn’t want to pick a fight with.

In a six-man tag match, Ruff Skies/Da Cobra took on Body Magic/Chris Hall. This was a fast paced match with a lot of cool action, double team moves and even some interference from Jesse Corgan. When all was said and done, Ruff Skies won after John Skyler delivered a picture perfect superkick to Eric St. Vaughn. Before the match, Eric rapped their entrance music live and did an amazing job of it which had people starting to cheer for this heel!

In the last match of the first round of the tournament, Trevor Court defeated Tolerant Xero. Court was mildly entertaining and Xero was a cross between Kane and Bane.

Lock Up defended their tag team belts against Lonesome Jay Bradley and The Ego Robert Anthony. Ego and Jay formed an uneasy alliance as the two have been mostly at odds for the past year. Their bickering was very entertaining as was this entire match. There was great action, some really amusing comments from Sugar Dunkerton as he was trying unsuccessfully to overpower Jay, and the finish was great. In the end Lock Up outsmarted Jay and Ego and retained their titles. This was easily the match of the night.

Thunderkitty and Nikki St. John had an arm wrestling match with Melanie Cruise as the referee. This was the best of three. Thunderkitty was obviously the stronger of the two ladies and quickly got the first round. During the second round when it looked like she was going to lose again, Nikki stood up and licked Thunderkitty’s hand. This grossed out Thunderkitty so much that she let her guard down and Nikki won that round. Thunderkitty won the third round and a very disgruntled Nikki stood up, tossed over the table and hit Thunderkitty with an X-Factor right on top of it!

In the final match, the final four contestants in the tournament faced each other in a fatal four-way match. It was a fairly short match which resulted with Brady Pierce winning the match (again with a big clothesline) and getting the contract. Billy Corgan came out to the ring to congratulate him and present him with a trophy. After he left, Pondo came to the ring and challenged Pierce to a no-DQ match at the next Resistance Pro show.

Among the Living was a great event for an even greater cause. It was a very special and unique show that was the best tribute that anyone could have paid to a wonderful person who was taken from this world far too soon.