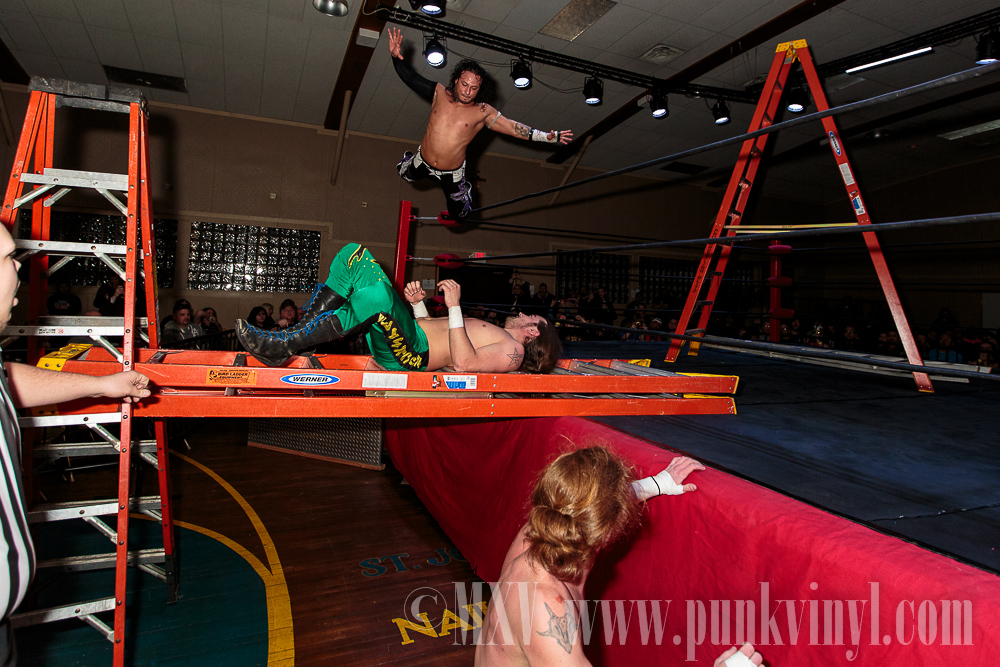 Spring has arrived (in theory but not in practice as the weather still sucks), the clocks got moved ahead properly so it doesn’t get dark so early anymore, and Pro Wrestling Blitz held their most recent event, Uprising, this past Saturday night out in their home base of Joliet, IL. They had a solid lineup of matches that was headlined by a triple threat ladder match for the No Limits Championship.

When the show got started, former champion Ryan Slade came to the ring holding an almost empty bottle of vodka that he kept drinking from. He said he was going to collect the bounty that Matty Starr put on Hardcore Craig. Craig came down to the ring and Ryan took the mic and tried to convince him to lay down and let Ryan beat him and they could split the money. He also said they both have a lot in common since they both like to drink. Craig wasn’t going for it and when the bell rang for the match to start, Slade took one last big swig and as he tipped his head back to get the last of the vodka he passed right out! Craig won and Rinaldo Piven and Matty Starr took the drunk Slade to the back to try to sleep it off.

Judas and Machine took on Ruff Crossing and Buddy Roberts Jr. in a tag match. Last month the 3 Rings had abducted Ruff and drugged him and left him in the middle of nowhere. He was a little worse for wear because of that and hasn’t been quite right since. Judas and Machine did a lot of double teaming and cheating along with help from The Ringmaster and between that and Ruff’s dizzy spells, Judas and Machine stole another win. After the match The Ringmaster decided that the 3 Rings want the title after all and said that Grinn will challenge Ruff next month for the title.

Brian Nelson from If These Looks Could Kill faced Hakeem Zane from Hero Street in a singles match. Brian’s tag-team partner, Greg Glover was at ringside cheering him on. This match had some good back and forth action but when Brian started getting in trouble, his partner helped him cheat to win when the referee wasn’t looking.

In a tag match, Matty Starr and Ryan Slade faced Kid Hybrid and Hallows. Slade was still wasted and had to be carried to the ring by Matty and Rinaldo Piven. Matty did the heavy lifting for his team for the most part but now and then the very drunk Slade would stumble in and make a mess of things. What was hilarious was that Slade was inadvertently helping when he’d stumble into situations that either distracted the referee or knocked the opponents down.  Slade and Starr managed to win in spite of Slade’s condition. This match was hugely entertaining.

TNA superstar, Mr. Anderson, decided he could use some extra money by trying to collect the bounty on Hardcore Craig. These two had an excellent match that saw Anderson getting the advantage and trying to wear down Craig but it wasn’t enough and Craig won the match after making a short but effective comeback.

The Ringmaster came to the ring with Grinn who was facing Willie Richardson in a singles bout. Grin got the advantage by working one of Willie’s legs in hopes of slowing the big man down. It worked for a while but Willie wasn’t about to go down without a hell of a fight and he mounted a comeback. When Willie tried to hit his pounce on Grinn, the pain from having his leg abused for most of the match was too much for him and gave Grinn the opening he needed to seal the deal. It wasn’t a totally clean victory as the Ringmaster poked his head in that match once or twice to help his man keep the advantage.

Greg Glover (with his If Looks Could Kill partner at ringside) faced Jeff Brooks who had Hakeem Zane in his corner. This match was somewhat similar to the earlier match with Zane/Glover and had some good action but the difference this time was If Looks Could Kill didn’t cheat their win to victory this time and were outsmarted by Brooks/Zane. These two matches did a good job of putting some sizzle into a feud between the two teams.

Billy Whack came to the ring to interrupt a match that Clancy was supposed to have. The Ego Robert Anthony came in as well and beat the crap out of Clancy as Whack demanded that Blitz owner, Tony Scarpone, come to the ring. Whack handed Scarpone papers to sign demanding he reinstate Ego into Blitz. Scarpone signed them without looking at them and didn’t realize they also prevent Tony from laying a hand on Ego. Scarpone grabbed Billy with ideas of getting even but Ego grabbed ring announcer, Andres, and threatened to break his neck if Tony didn’t let Billy go. The two threatened each other while holding their respective victims for a couple of minutes before Tony relented and let Billy Whack go. Ego then picked up Andres and gave him a death valley driver.

In the main event, Zach Thompson, Mr. 450, and Jimmy Rockwell faced each other in a triple threat ladder match for the No Limits title. Rinaldo Piven and Melanie Cruise were quickly banned from ringside by the referee so they would stop interfering with the match but that didn’t last very long. This match was heavy on the action and big stunts with the ladders. All three wrestlers took some pretty sick bumps on the very unforgiving ladders. Mr. 450 splashed someone on a ladder and all three guys had to be feeling the effects of the match for days. The crowd loved all the action and these guys nearly killed each other trying to get that belt down from the ceiling. The match was long but never felt like it as the action was pretty steady from start to finish. Outside interference from Rinaldo Piven wasn’t enough to get Zach Thompson the victory because Melanie Cruise came out and powerbombed him for his troubles and then held onto Mr. 450’s leg to keep him from reaching the belt long enough for Rockwell to get it and escape with his title still intact. At this rate the only way anyone is going to take that belt from him is going to be in a cage match and that’s only if the cage is strong enough to keep Melanie out of it! It was an excellent main event on a rock-solid night of good wrestling action.