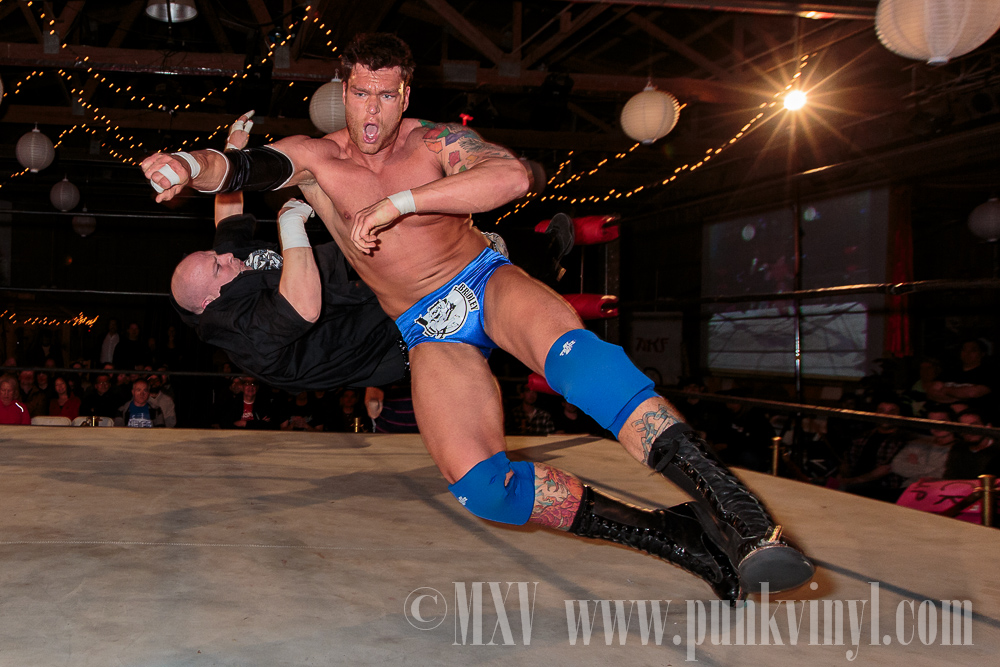 Good Friday was made twice as good thanks to Resistance Pro Wrestling bringing their latest event out to the western suburbs of Chicago at the Arabian Knights Barn in Willowbrook, IL. There was a packed house and the card featured some new faces and a former ECW superstar. There even was an appearance by the current lineup of Smashing Pumpkins who were signing autographs at the pre-show meet and greet.

Two dark matches got the crowd warmed up. The first was a fatal four-way match featuring some new faces to RPro. The match was short and full of action. Lennox Noris got the win.

A very angry Nikki St. John took on newcomer Mickie Knuckles in the second bout. Nikki dominated most of the match but Mickie got some licks in before succumbing to defeat. Nikki was clearly pissed off that she was in an opening match and made no secret about it after winning her match.

When the official show got started, C-Red came out to the ring with his team, The Soul Touchaz to challenge Lock Up for the tag belts. Big Willie and Marche were the two Soul Touchaz vying for the titles and Lock Up was of course accompanied to the ring by their warden and guard. This match turned out to be a pretty evenly matched and exciting fight with spots where both teams were in control and plenty of outside interference from the various members. Eventually Lock Up retained their belts by a narrow margin thanks to some crafty double-teaming. This match was exciting from start to finish and hopefully these guys will face each other again as it has the ingredients for a hot, long-running feud.

In a no-DQ match, newest RPRo superstar (thanks to him winning the contract at Among the Living) Brady Pierce answered the challenge issued by Pondo to face him in the style of match he is known for. The match started off like a traditional match until Pondo figured out he wasn’t going to out-wrestle Pierce so he went to his array of weapons and got to work on the kid. The violence started with Pondo stapling a dollar bill to Pierce’s head with a staple gun and then Pierce, now bleeding, pulled off the bill, took the staple gun from Pondo and stapled it onto his cheek! This just made Pondo up the ante by knocking Pierce down and hitting him in the nuts with a putter, then taking a saw blade that was attached to a pole and rolling it up Pierce’s back. Some chairs made an appearance and both men took turns during the match dumping the other one through a couple that were set up in the ring. When the violence came to a climax, Pondo got the win and then took the mic and put Pierce over as a worth competitor and shook his hand. This was the first match of its kind in RPro and the fans seemed to enjoy it.

Jesse Corgan and his therapist, Miss Prig, came to the ring next. Miss Prig was wearing a silk robe and carrying a whip and said something about how she was going to help Jesse release some of his pent-up anger by transferring the power. She seemed really nervous and it didn’t make a lot of sense but none of that mattered because she removed the robe to reveal that she was only wearing lingerie. Jesse looked confused and questioned if that was really his therapist which was hilarious. She then started to spank him repeatedly which he really seemed to enjoy. Chris Hall came to the ring and looked like he was going to break up the action but it turned out he wanted in on it too and asked for some spankings as well. When the spot went on for a couple of minutes longer than it needed to, Billy Corgan came to the ring and broke up the fun and informed Jesse that he was going to be wrestling in the battle royal later that evening which infuriated Jesse. Miss Prig may not have done a good job on the mic during this segment but her hotness and Jesse’s stunned reaction when she disrobed made for a couple of entertaining minutes.

Another newcomer, Crazy Mary Dobson took on Thunderkitty in the next match. Mary has a much faster and more high-flying style compared to Thunderkitty’s retro style of mat wrestling. During the first part of the match the two ladies traded arm holds and reversals before Mary started to use her flashier moves in her arsenal to try to gain the advantage. Neither lady was able to keep the momentum in their favor for more than a minute or two before the other would regain control. Eventually Thunderkitty wore down Mary enough to lock on her sleeper hold and get the win.

ECW legend Mikey Whipwreck made a rare appearance and had to face the monster, Lonesome Jay Bradley for his troubles. Mikey, the eternal underdog, had his work cut out for him at the hands of Bradley but he gave him one hell of a good fight. The fight spilled outside the ring where Mikey dodged a clothesline by Jay which made Jay ram his own arm into the ring post. This slowed down Jay enough for Mikey to put in some good offense but the bigger man was able to overpower him enough to keep him from ever winning the match. After giving Bradley everything he had, Mikey fell victim to the boomstick and Bradley got the win. This was an excellent match and Mikey can still go and hasn’t lost a step and it was good to see him back in the ring.

The next match was a battle royal to determine who would be the number one contender for the Resistance Pro title. A good deal of the regular roster was involved in this match including Ruff Skies (Ruff Crossing and John Skyler), The 2 Star Heroes (Matt Knicks and Chris Castro), Mr. 450, Jocephus, Chris Hall, Body Magic, and more. Eric St. Vaughn came to the ring and rapped Body Magic’s entrance music to the disgust of Ashton Vuitton. Ashton took the mic and said he is not medically cleared to wrestle and that he is the number one runner-up in the event that whoever wins the match can’t fulfill his obligations as number one contender. Jesse Corgan was the last man to come to the ring and he wanted nothing to do with any of it. He didn’t want to get into the ring but Chris Hall coaxed him in saying together they would win the match and that he had Jesse’s back. Jesse entered cautiously and everyone in the ring was confused as to why he was even part of the match in the first place and they were all reluctant to get started. Everyone except Jocephus that is as he started walking towards Jesse with plans on chucking him out. The terrified Jesse jumped into Chris Hall’s arms who gingerly lifted him over the top rope and onto the apron Jesse quickly hopped down to the floor and eliminated himself. Jocephus next set his sights on Eric St. Vaughn who screamed like a girl and hopped over the rope and onto the floor, also eliminated himself. He ran to the back so fast that smoke was trailing behind him. This pissed off Ashton to no end as he had plans of Eric winning the match for him so he could take his number one contenders spot. When the match got going, everyone was beating the crap out of each other and trying to toss each other out. The proper tag teams in the match teamed up with their respective partners when it worked for them but the match is every man for himself which Ruff Crossing reminded his partner, John Skyler of when after the two of them eliminating someone together, Ruff took the opening to dump Skyler out too. When the dust cleared, the massive Jocephus was victorious and is now the number one contender to the Resistance Pro champion which should make for a very good fight!

D’Arcy Dixon faced Amazing Kong for her RPro Women’s title D’Arcy brought the fight to the larger Kong but Kong fought off all of her attempts at offense. After a few minutes, Nikki St. John came to the ring and started taking the boots to Kong and the referee threw out the match. D’Arcy and Nikki then teamed up to put a beat down on Kong until Melanie Cruise came running to the ring to make the safe. The Baron brothers came to the ring and declared that they immediate have a tag-team bout. After a lot of back and forth fighting and Melanie spending most of the time in the match for her team, Kong hit her finisher on D’Arcy and got the win. After the match Kong then hit Melanie with her finisher to reminder her who the champ is.

The Ego Robert Anthony put his RPro title on the line against former WWE superstar Bobby Lashley. The crowd was actually pretty evenly split in who they were cheering for. These guys put on an extremely entertaining 30 minute match that started with some trash talking to each other and continued with each wrestler giving the other one everything they had and them some. Lashley had the definite strength advantage which he proved on more than one occasion such as throwing Ego into a light rig hanging overhead and whipping Ego into the turnbuckle so hard that the ring nearly collapsed. These guys fought tooth and nail and Ego was able to overcome some amazing punishment and still find a way to escape the three count. A very frustrated Lashley was relentless in his attempts to win but Ego managed to surprise him with a couple of moves and a Death Valley Driver and got the win. This match was an excellent way to finish a solid night of action and it’s likely a rematch between the two wrestlers would be most welcome after such a great battle.