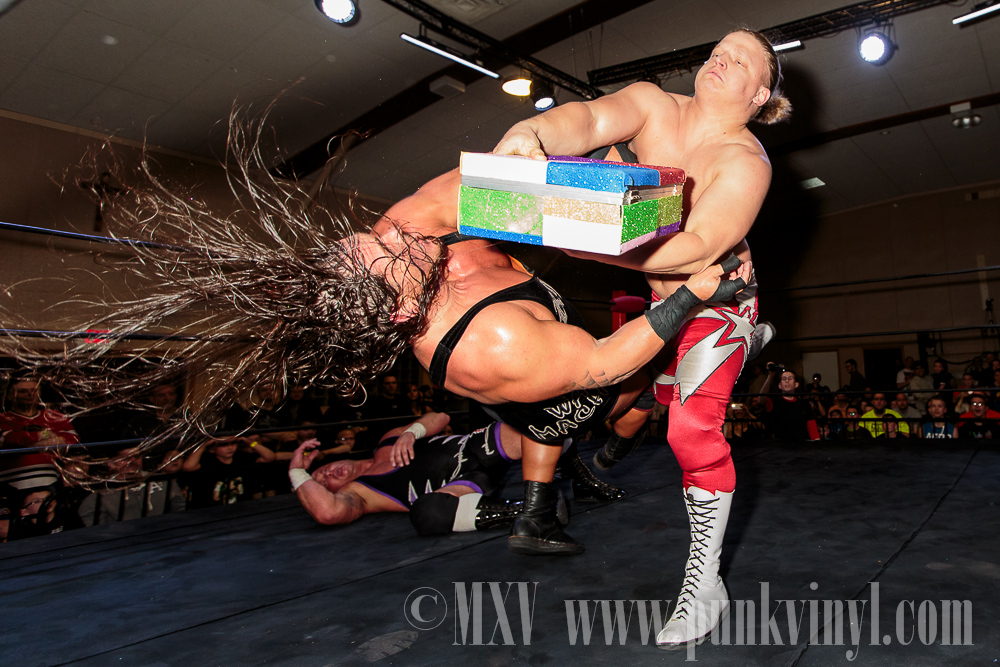 It’s spring and not only is the weather finally heating up but in the world of Pro Wrestling Blitz some feuds are as well. Saturday night Blitz held their latest event in their home base of Joliet titled High Stakes. It was an appropriate name for the event as stakes were high with not only a world title match but a major superstar came in to try to collect the $10,000 bounty on Hardcore Craig’s head.

Fans who got there early were treated to a dark match. It was a tag-team bout featuring Arc Angel and Exceletor vs Sunny Ago and Black Dynamite. It was a typical “by the numbers” short match with a couple of cool spots and double team action. Sunny and Dynamite won with a double sit-down power bomb.

A six man tag match got the proper show started. It had The Elite (Ryan Slade, Matty Starr and Zach Thompson) vs. Ashton Vuitton, Mr. 450, and Colin Cambridge. Slade was already 3 sheets to the wind by the time he made it down the ramp to the ring and Zach was chewing on a rubber squeaky toy the entire time. During an early part of the match the babyface team took the toy from Zach and he was consumed with getting it back which led to a pretty amusing game of “keep away”. He eventually got it back and the real action began. This match was full of fast-paced action and was a lot of fun. When a too drunk to function Slade tried to pick up Mr. 450 for a big vertical suplex, he slipped and fell over with 450 landing on top of him which got him the three count.

The Ego Robert Anthony and Billy Whack came to the ring next so Ego could face Clancy. Ego took the mic and said he didn’t feel like wrestling and was going to just quit so Clancy could get his first win. This wasn’t enough for Clancy who was wanted to get his hands on Ego since being jumped by him last month so he attacked Ego and the ref signaled for a match to begin. Clancy got in some good offense for a bit before Ego turned the tables on him and really gave him a beating. A drop kick right to the mouth had Clancy bleeding from the mouth and then Ego hurled him into the ring steps outside the ring which busted open the back of Clancy’s head. This was more than enough for Ego to get the pinfall. After the match, Billy Whack presented Ego with the original LWF world title which he said Ego was the last person to have held it and as far as he’s concerned Ego is still the undefeated champion and has been for over the past 10 years since it was last defended!

Machine and Judas (escorted to the ring by the Ringmaster) defeated Kid Hybrid and Hallows in a tag match. Hybrid did some flash high spots and Hallows did a great job keeping up in the strength department with Machine but the interference by The Ringmaster throwing powder in the face of the good guys prevented them from winning and Judas and Machine were once again victorious.

Former ECW and WWE superstar, Rhyno, came to Blitz to try to collect the $10,000 bounty that Matty Starr put on Hardcore Craig and faced Craig in a hardcore match. This match is right up both wrestlers’ alley and they put on a really solid and exciting hardcore brawl that first had them fighting out in the crowd and then once they got back to the ring, they proceeded to punish each other with a variety of weapons including garbage cans, chairs, cookie sheets, and a ladder. The match had a lot of great back and forth action and some exciting near falls and despite taking a gore, Hardcore Craig managed to kick out and fight his way back to victory. After the match, Starr and the rest of The Elite came to the ring and attacked both men. Craig and Rhyno fought them off but not before Matty clocked Rhyno with his briefcase full of money. Rhyno also gored Ryan Slade through a table where Slade ended up unconscious from it and was out there through the entire intermission before officials helped get him out of there.

Tony Scarpone and Chazz Moretti came to the ring and had a big argument with Billy Whack and Robert Anthony. This led to Anthony picking up Chazz and giving him a death valley driver. Scarpone was helpless to extract any sort of revenge on Anthony due to the restraining order against him.

Jimmy Rockwell (with Melanie Cruise in his corner) defended his No Limits title against fan favorite, Buddy Roberts Jr. Buddy gave Rockwell one hell of a fight in a very good match but in the end, Rockwell once again cheated his way to victory thanks to the help of Melanie Cruise.  Mr. 450 came out after the match and Rockwell and Cruise started beating on him too.

In a best of three falls match, If Looks Could Kill took on Hero St. Rebellion. If Looks Could Kill quickly double teamed their way to winning the first fall and almost did it again a second time but Hero St. managed a nice reversal to pick up the second fall. After a lot of double team chaos, Hero St. Rebellion got the third fall and was declared the winner but in what was a bit of a confusing swerve, the members of If Looks Could Kill demanded to restart the fall because the legal man of their team wasn’t the one that got pinned. The referee took their word for it and restarted the match which resulted in If Looks Could Kill double teaming their way to victory once more. The restarting part was a little disjointed and lost on the crowd and would have come across better had another referee come out and declared that the legal man wasn’t the one that was pinned but that aside it was an exciting tag match and it is likely we haven’t seen the last of these two teams doing battle against each other.

In the main event, Ruff Crossing put his Blitz title on the line against Grin of the 3 Rings (accompanied by The Ringmaster). This was a really hard-fought match by both members and was everything you’d expect of a title match. Grin and Ringmaster cheated as much as they could but in the end it was Ruff Crossing who got himself disqualified when he lost control and hit Grin with a chain. For his troubles, Ruff got jumped by all the 3 Rings after the match and they tried once again to stuff him into a body bag but a bunch of wrestlers came out from the back to make the save. A furious Ruff Crossing said he’d take on any one of the 3 Rings next month in a body bag match which seemed to make the Ringmaster quite happy.

High Stakes was a rock solid wrestling show from top to bottom and left the audience satisfied while also setting up some great matches for next month’s show. The entire roster of Blitz should be proud of a job well done.