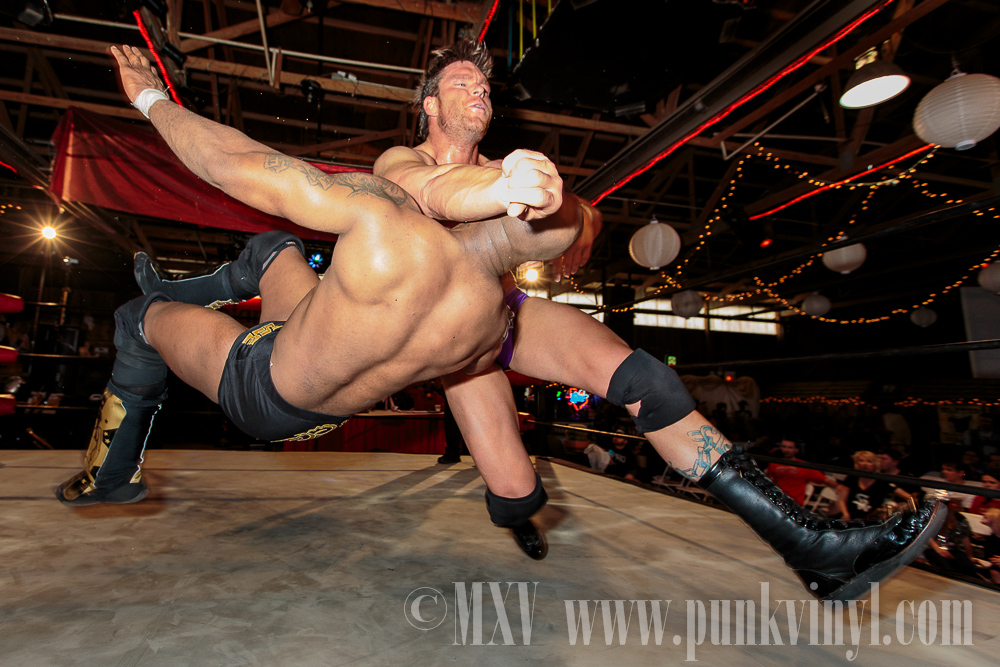 Resistance Pro Wrestling returned to the Arabian Knights Barn in Willowbrook, IL. It was an afternoon show and a beautiful day and the federation put together a really fun show for the fans. This show was unique in that every match on the card was a different gimmick match. This gave the entire event a really special feel and was a nice change of pace from your typical monthly wrestling show.

There was a dark match to get things started and it too was a gimmick match with Stonewall and Barry Ryte. The premise was that one of the two would get a contract with RPro if either Barry was able to last five minutes with Stonewall or if Stonewall could beat Barry in under five minutes. Stonewall was about 300 percent bigger than Barry and Barry knew going in that his only chance of survival is to stay away from Stonewall as much as possible. Barry was running, screaming, dodging blows and receiving blows and throughout it all he kept asking how much time was left. In fact Barry was so hysterical that it totally made the match and hopefully they will bring him back based on that entertainment value alone. Stonewall was a beast and he finally got his hands on Ryte long enough during the last ten seconds to flatten him with a huge slam and get the pin with only a couple of seconds to spare.

RPro champion The Ego Robert Anthony came to the ring and his gimmick match was that he gets to pick his opponent and match stipulation. While he was in the middle of talking, Mr. 450 came out and interrupted him and demanded a title shot. Ego said that he’d put his title on the line if 450 puts his career on the line and if 450 loses he is out of RPro for a year. Mr. 450 thought about it for a minute and agreed, then Ego told him that the other stipulation is that it is going to be a triple threat match and that Da Cobra is the other opponent. The three men had a fabulous match that was high on the action pretty much from start to finish. It was chock full of interesting spots involving all three men and a lot of back and forth. When the smoke cleared, Ego retained his title and Mr. 450 is now out of Resistance Pro for a year. He was none too happy about this.

In an inter-gender evening gown/tuxedo match, Ashton Vuitton fought Mickie Knuckles. Ashton came to the ring cocky as ever thinking this match was going to be a walk in the park. He is no stranger to fighting women as he once had a match against Serenity where he mercilessly beat her to a pulp. Mickie proved to be a much tougher opponent as she gave him quite a fight. The two grappled around the ring a bit trying to rip the clothes off the other one and they were pretty evenly matched until Ashton grabbed a chair that he was going to use to finish Mickie off. He was cut off by the referee and while the two struggled with the chair, Mickie pulled the pad off one of the top turnbuckles which worked to her advantage when Ashton’s head made contact with it, stunning him long enough for Mickie to strip him down to a very tiny thong. An embarrassed Ashton tried to cover up the best he could and ran out of the ring as fast as he could.

Ruff Skies (Ruff Crossing/John Skyler) faced Brady Pierce and Pondo in a Barnyard Brawl match. This was a hardcore match with no rules. The two teams beat each other senseless with a variety of weapons including a stop sign, a staple gun, and in one particular painful spot, a sledgehammer and cinder block which was used to pretty much guarantee that Ruff Crossing won’t be making any babies anytime soon. A good portion of this match was fought outside on the floor and in the crowd. Despite being on the receiving end on the lion’s share of the punishment, Ruff Skies managed to get the win.

Trevor Court tried his hand and taking down Lonesome Jay Bradley in a submission match. This was a very old school match where the two traded a bunch of holds in hopes of wearing down the other to the point of submitting. Jay worked Trevor’s arms and controlled most of the match. Trevor fought like hell and tried to weaken Jay’s legs. He did such a good job of squirming out of things that a frustrated Bradley took to some bigger moves to gain control including nailing Court with a pair of boomstick lariats in the match, the second of which was the deciding factor in Trevor giving up after jay locked him up in a submission hold. The match started off a little slow but once they started incorporating a little more action into it, the pacing was nice and the match told a very good story.

Body Magic (Eric St. Vaughn and GQ) had a “dance off/rap off/pose off” with the Two Star Heroes (Matt Knicks and Chris Castro). This wasn’t a wrestling match, it was a three-part contest. The first part was a dance contest that Castro and Knicks won, the second was a rap off which Body Magic won. The last was the pose off which Body Magic easily won. After the decision, Eric St. Vaughn dropped some elbows on Castro to add injury to insult and then tossed the mic in the air which landed on Castro’s head and busted him open. It should be noted that GQ didn’t participate at all in the contest, he left all the work to Eric St. Vaughn and stood there looking annoyed the entire time.

Jesse Corgan (with Miss Prig) came out and introduced his latest soldier, Bull Bronson. This guy was gigantic and had to weigh about 1100 pounds. He fought Remi Wilikins in a “Country Whuppn’ match”. The premise of this match was that the winner got to beat the loser ten lashes with a leather belt. Wilkins was at a massive disadvantage being so much smaller than Bronson. Bronson shot down all Remi’s offense in the beginning but then Wilkin’s got smart and found an opening that let him hit a fameasser and get the pinfall. Jesse was clearly pissed off that his new soldier had failed him and he left. Remi got a belt and only managed to get four lashes in before Bronson had enough and attacked him to make him stop. He left the ring and never received the rest of the lashes he was owed.

It was time for the ladies to shine and four of them did in a “turn on your partner match”. This started as a tag match with Thunderkitty and Crazy Mary Dobson teaming up against Nikki St. John and D’Arcy Dixon.  Once a team is beaten, the winning team then has to face each other and the winner gets a title shot for the RPro women’s title. Thunderkitty and Crazy Mary made for a good team and worked well together, but it wasn’t enough to get the best of Niki and D’Arcy who won the bout. The two then faced each other in a pretty solid match which D’Arcy ended up winning in a very hard-fought battle. D’Arcy took the mic and said having faced Amazing Kong (the champ) more than once, she now knows what needs to be done to beat her.

In a six man elimination tat match, Lock Up with Warden Meyers defended the tag titles against Da Soul Touchaz.  The match would end when all three members of a team were eliminated. This was tag team wrestling at its finest with great double teams moves and a lot of fast action. Warden Meyers, not a wrestler by any stretch of the imagination, stood out on the apron for most of the match. Of course that just meant that he’d me the most likely one to be the last man standing for his team and that’s just what happened. It was down to Big Willy against the warden as all the other team members on both sides were eliminated. After Willie floored the warden with a big pounce it looked to be all over for Lock Up and their titles but one of the two guards distracted special referee Lance Storm long enough for the other guard to knock Willie out with his nightstick and pulled the unconscious warden over him to get him the pin and the victory. When the warden came to he was so full of himself that he started pushing Lance Storm around. Lance wasn’t having it and super kicked the warden and knocked him back out! The crowd popped huge for that one.

Back for the Attack was a really fun show with some great matches and interesting gimmicks. It was a great way to spend a Sunday afternoon/evening and it set up a couple really good angles moving forward.