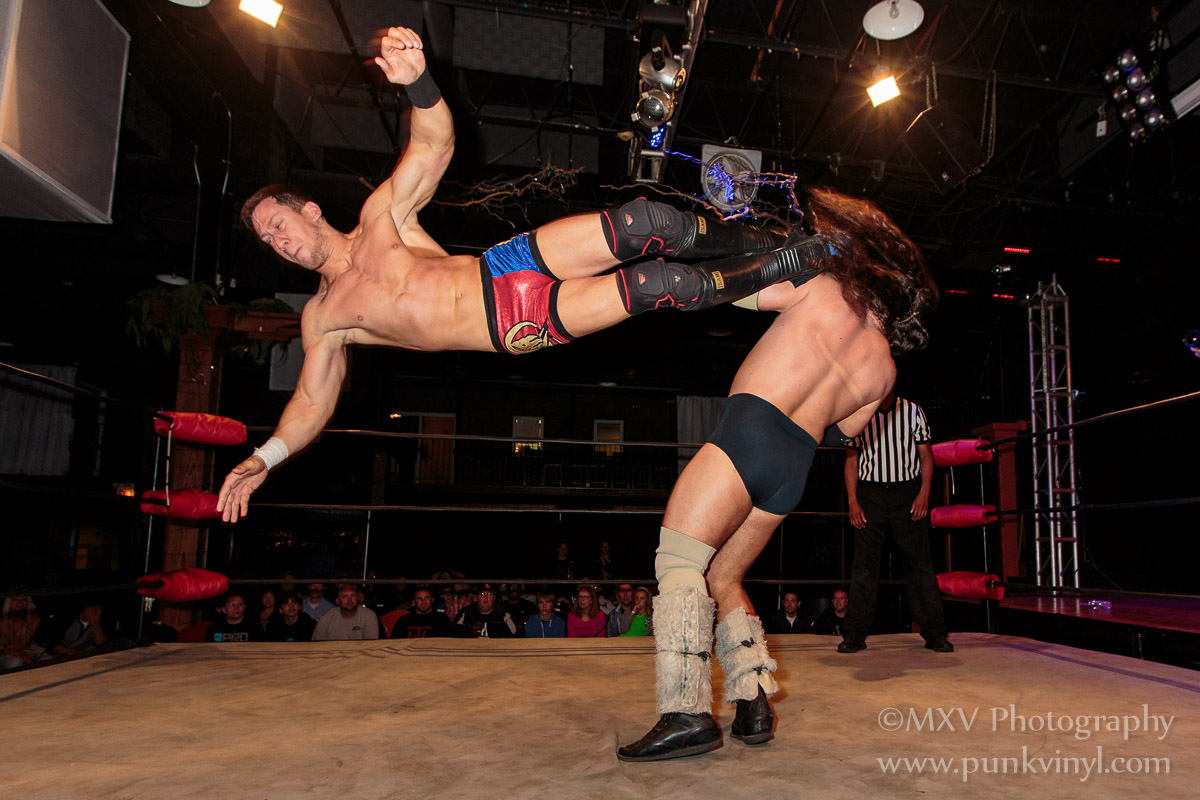 The holiday weekend got off to a fun start on Friday night over at Bourbon Street where Resistance Pro Wrestling held their latest event, Lights Out. This show featured the usual roster, some new faces, and a few legends. It was a stacked card that drew a good sized crowd.

The show had two dark matches to get the crowd warmed up. The first featured Remi Wilkins vs. Jake O’Neill. Jake is a recent graduate of Lance Storm’s wrestling school. This was a pretty short match and the newcomer (O’Neill) looked good and exhibited talent. Remi Wilkins got the win with a big finisher move.

Crazy Mary Dobson had to face off against a guy in the second match. He was billed as being from Bayside High and was wearing Saved by the Bell trunks. Someone in the crowd pointed out that he wasn’t wearing the Bayside colors however. Bayside spent most of the match beating up on Mary but he underestimated just how tough she really is and she made a big comeback and nailed him with a DDT and then a split legged moonsault off the top rope.

When the proper show stared, Jocephus came to the ring first with his cave woman and cut a promo about how he was going to destroy The Ego Robert Anthony in their match later that night. When he left Body Magic came to the ring to face Two Star Heroes in a tag match. Two Star Heroes started off the match strong but soon was cut off by some shifty tactics by Body Magic. When they tried to rally a comeback they came up short when Matt Knicks tried to do a high cross body off the top rope on Ashton Vuitton who dodged it by doing a matrix-like back bend and then hitting a big knee smash to knock Knicks out for the three count.

The ladies had a chance to shine in the next bout which was a best of three match with Thunderkitty and Mickie Knuckles. Mickie got the advantage early and scored a quick pin for the first fall. This pissed off Thunderkitty and inspired her to fight harder and she took the second fall. In the third one Mickie regained the advantage but when she tried to roll up Thunderkitty, she reversed out of it and locked her sleeper hold on Mickie and put her out to get the win. This was a very entertaining match with a really well-done finish.

Da Cobra had the unfortunate luck of ending up facing Lonesome Jay Bradley in the next bout. Jay dominated most of the match and cut off Cobra at nearly every turn. Cobra never gave up fighting though and made Jay really work for his victory. In the end however, Cobra was the latest victim to fall to the boomstick.

Jesse Corgan came out to introduce his latest tag team dubbed Special Forces. It featured Barry Ryte and Chris Hall, who now wants to be known as Vector A. He was wearing face paint. They challenged Lock Up for the tag titles. Lock Up was missing their warden for some odd reason and came out alone. Lock Up really entertained the crowd with not only their flashy wrestling but with comedy as they poked fun at Vector A’s face paint which just pissed him off and he retaliated by beating on the prisoners for awhile. Lock Up took a pretty good beating for a bit but managed to still win the match and retain the titles.

Psycho Sid Vicious came to the ring and spoke to the crowd. He also was around to sign autographs and pose for pictures. He also asked the fans to say a prayer for Superstar Billy Graham who was originally supposed to be at this show but was unable to make it due to some heath issues that landed him back in the hospital.

Amazing Kong wasn’t able to make this show either due to illness and she forfeit her women’s title as a result. Nikki St. John and D’Arcy Dixon faced each other in a match to determine a new champion. This was a solid match with these two ladies that resulted in a good comeback from D’Arcy that ended with a powerbomb and a victory. D’Arcy is the new champion and it’s amazing how far she’s come in a the year and a half she’s been in Resistance Pro.

Raven and Perry Saturn took on Pondo and Brady Pierce in a “Raven’s Rules” tag-team match. “Raven’s Rules” pretty much meant there weren’t any and the two teams proceeded to beat each other up in and out of the ring. Perry did most of the heavy lifting for his team and Pierce and Pondo shared most of the duties for their team. They fought all over the building and at one point while out in the crowd, Mr. 450 who was up in the balcony jumped off of it onto all four combatants and leveled them all! When the action finally made its way back into the ring, Raven nailed his “evenflow” DDT to get the win. After the match Raven took the mic and gave a nice little speech about how the people of RPRo are the stars of tomorrow and thanked the fans for supporting the federation.

In the main event, The Ego Robert Anthony put his world title on the line against number one contender, Jocephus. Ego put up one hell of a fight against his bigger and more powerful foe but nothing he was doing was getting him the advantage for very long. It was as if the more that Ego did to Jocephus, the more angry he got and just punished Ego that much more. Ego never gave up trying but in the end when Jocephus beat him up outside the ring and powerbombed him into the crowd’s seats, Ego was unable to make it back into the ring by the ten count and was counted out. Jocephus was victorious but the title can’t change hands on a count-out so Ego retained his title and will be feeling that beating for a long time to come.

Once again Resistance Pro put on a very entertaining wrestling show which featured their roster of great talent. The fans were thoroughly entertained and active the entire night and it was a great night to be a wrestling fan.

Check out additional photos from Lights Out here!