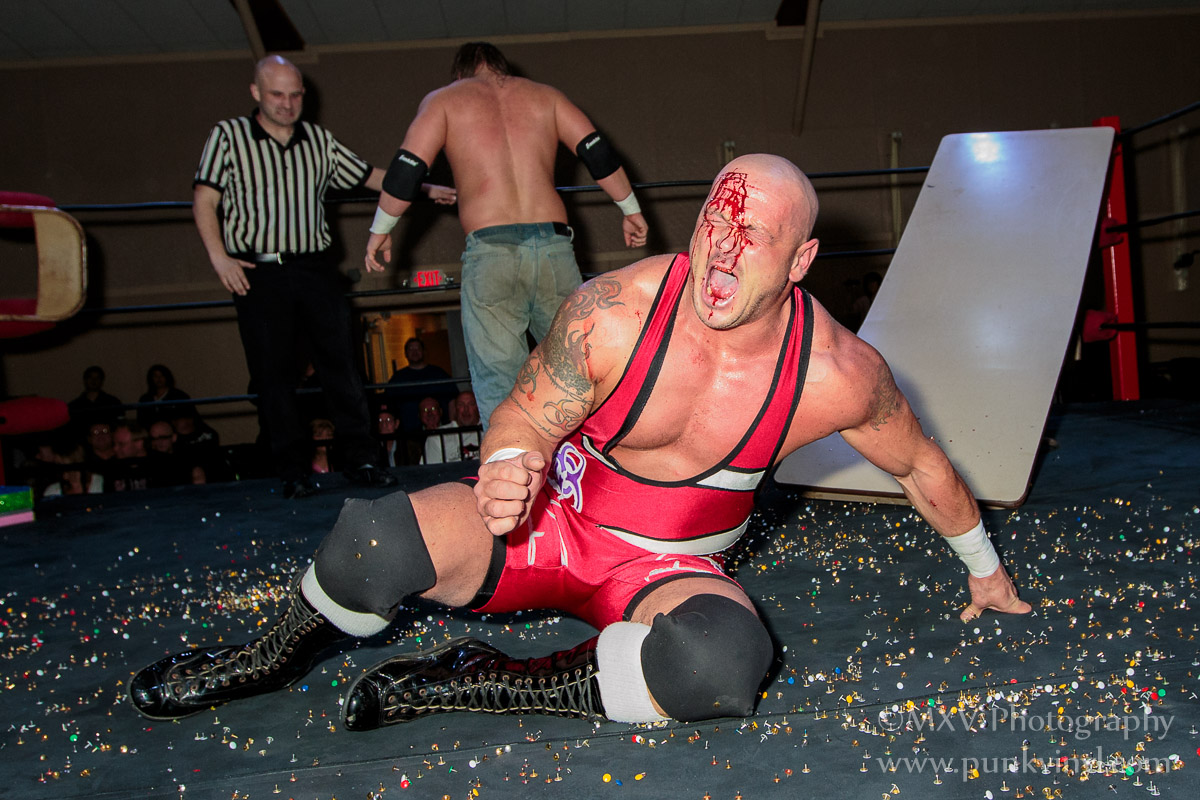 If you are a wrestling fan can you think of anything more appropriate for Memorial Day Weekend than to have Hacksaw Jim Duggan as your special attraction? The answer is no and Pro Wrestling Blitz knew that which is why they brought in good old Hacksaw for their show on Saturday titled Hostile Intent. It featured not only an appearance by Hacksaw but a Tables and Thumbtacks match between Matty Starr and Hardcore Craig. It was a packed house on Saturday night when the wrestling action got started.

At the beginning of the show, Blitz owner Tony Scarpone came to the ring with the new Blitz commissioner, Mike Brooks and they presented Ruff Crossing with a brand new heavyweight title belt to replace the old one that Tony said he was sick of looking at. The new one was a major improvement. The celebration was short-lived as the Ringmaster came out and said that the 3 Rings were taking that title and out from under the ring came Grin. He attacked Ruff but Ruff was able to turn the tables on him fairly quickly and toss him out of the ring. Ringmaster then said that he never said it was Grin who would be facing Ruff that night and Machine then came out from under the ring and dropped Ruff with a spine buster. He left the ring and then Judas came out from under there and Ringmaster announced that it would be Judas facing Ruff for the title and the match got started. This was a body bag match so the only way to win was to put your opponent in a body bag and zip it completely closed. The two fought fast and furious and when it looked like Judas was going down, Ringmaster handed him some powder which Judas hoped to blind Ruff with. When Judas threw the powder, Ruff ducked and it blinded the referee. Ruff then nailed Judas with a Tombstone but Ringmaster came in to interfere. Ruff kicked him in the face and knocked him out and zipped him up in the body bag. With Judas out of the ring and out of the referee’s site, he naturally assumed that it was Judas in the zipped up body bag and he called for the bell and Ruff was declared the winner. It was a nice finish to see Ruff beat the rings with a little of their own medicine.

Next up was Buddy Roberts Jr. vs. Zach Thompson. Zach came out with that pig chew toy in his mouth and started wrestling with it in there. He never took it out and kept chewing it as he fought. Buddy pulled it out of his mouth and Zach was so fixated on trying to get it back that it gave Buddy all kinds of openings to hit moves on him. When Zach got the toy back he was able to focus on the match at hand but some botched interference from Rinaldo Piven ended up hurting Zach and Buddy got the win much to the crowd’s delight.

Next up was Clancy vs. Cutler. This was a fairly short match with some good moves by both men. Clancy had Cutler going for a while in the middle of the match but Cutler was able to regain control and get the win.

Next up was Hacksaw  Jim Duggan vs. Ryan Slade. Hacksaw got a HUGE round of applause from the crowd who were behind him and cheering for him non-stop throughout the match. Hacksaw got the early advantage but some cheating on Slade’s part saw him get the upper hand. The crowd cheered even harder for Hacksaw which helped him mount a comeback. When Rinaldo Piven tried to interfere in the match, Slade collided with him and that allowed Hacksaw to tackle Slade and get the win. After the match there was an intermission where fans were able to get a photo with Hacksaw in the ring.

Mr. 450 once again challenged the ever elusive Jimmy Rockwell (with Melanie Cruise in his corner) for the No Limits title. 450 gave Jimmy one hell of a good fight and Jimmy tried like hell to retain the title including having Melanie help him cheat to win except this time it backfired and 450 knocked Jimmy into Melanie which allowed him an opening to superkick Jimmy and then nail him with his 450 splash and finally take the title from Jimmy, ending his very long reign of terror. The crowd exploded when 450 nailed his finisher on Jimmy and were ecstatic when the referee counted to three. Jimmy and Melanie were, of course, pissed off having lost.

Former commissioner Chazz Moretti came out and introduced his new tag-team of Ashton Vuitton and Colin Cambridge. They took on If Looks Could Kill who thought they were going to have a night off and came out in their beach attire and flip-flops. Forced to wrestle barefoot (and one of them in a speedo), they put up one hell of a fight but Chazz’s new team were too much for them and got the win, much to the delight of Chazz who is consumed with getting revenge on The Ego Robert Anthony.

In the main event, Hardcore Craig finally got his hands on Matty Starr in a thumbtacks and tables match. Matty had put a $10,000 bounty on Hardcore Craig’s head which no one had been able to collect on thus far so Matty decided that he would have to do the job himself. Craig got started early beating the living hell out of Matty and even whipping him into a table propped up in the corner which was very unforgiving and didn’t break (though it probably broke parts of Matty’s spine). Craig then got the bag of tacks and poured them all over the ring. Matty slipped out of his clutches and was able to dump Craig onto the tacks which gave Matty the advantage to start to inflict some punishment on Craig including whipping him head first into a chair which busted Craig wide open. The two traded blows and dumped each other onto the tack-covered mat repeatedly until they decided to take the bloody fight out into the crowd. They made their way over to the back of the arena where there was the hydraulic lift used to mount the lights and Craig put the nearly unconscious Matty onto a table and then got into the lift. He raised it up near the ceiling and then jumped off of it and landed a big elbow onto Matty which put them both through the table. The crowd went nuts and both men were out on the floor. From out of nowhere the 3 Rings made their way over to the downed men and dragged both of them back to the ring and threw them both inside. Machine picked up Craig and leveled him with a spine buster into the tacks which put Craig out for good. They put the nearly-dead Matty on top of Craig and Judas held them down as the referee counted three and awarded the match to Matty. He suddenly came to and was elated that “he finished off Craig”. Machine grabbed the suitcase of money and the Ringmaster said it was the 3 Rings who did the work and they will be taking that bounty and if Matty  knew what was good for him he’d get the hell out of there. Matty bolted and the Rings relished in their handy work as the Ringmaster threw a fireball in Craig’s face, burning him. The smoldering Craig was rescued by Ruff Crossing, Buddy Roberts Jr. and Mr. 450 who helped the bloody and burnt Craig to the back and off to the hospital.

Hostile Intent was a fantastic show with excellent matches from start to finish that ended with a bloody brawl that left the fans completely satisfied. The packed house sure got their money’s worth that night!