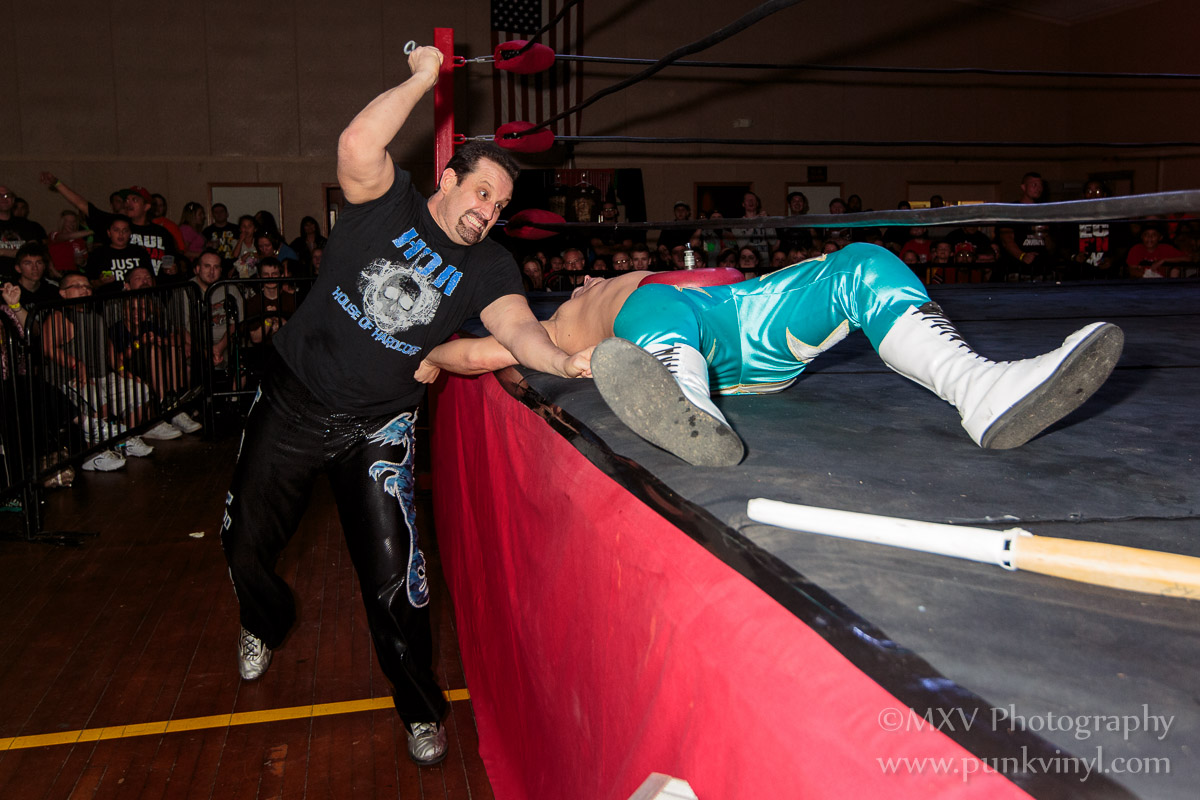 Summer finally started heating up at St. Joseph Park when Pro Wrestling Blitz held its latest event titled Summer Rumble. This time out the main event was a Royal Rumble style battle royal where the winner would get a title shot at the heavyweight title currently held by Ruff Crossing.

The pre-show featured a dark match that featured two ladies. Women’s wrestling has been nonexistent in Blitz so it was a really nice change of pace to finally have a ladies match. Melanie Cruise (accompanied by Jimmy Rockwell) faced Melissa Coates in a singles match. Rockwell took it upon himself to coach Melanie from the outside and his coaching style consisted of him criticizing everything she did, even when she had the upper hand. Melanie had things under control for the most part and when it looked like she was setting Melissa up for a finish, Jimmy came into the ring and body slammed Melissa which got Melanie disqualified. Melanie was pissed and started yelling at Jimmy as they left the ring.

Machine took on Buddy Roberts Jr. in the next match. Buddy put up one hell of a fight against his larger opponent but came up short at the end of a spine buster.

Zach Thompson and Ryan Slade faced Super Mario and El Chivas Blanco in a tag match. Ryan was already three sheets to the wind when he walked through the curtain. El Chivas Blanco’s gimmick is that he is some sort of creepy gay goat. He pranced around the ring like a ballerina and his gestures were hilarious. Zach did most of the heavy lifting for his team but Slade stumbled in and managed to put together some offense, some of it even on purpose. In the end though Slade messed up due to being so drunk and Super Mario rolled him up for a pin. This was a fun match with some good comedy elements.

Colin Cambridge (with Chazz Moretti in his corner) had a singles match against Brian Nelson from If Looks Could Kill. This match featured a lot of action and the two men were pretty evenly matched. When the referee wasn’t looking Brian’s tag team partner came out and choked Colin on the top rope and snapped him back off which gave Nelson the opening to finish him off for a cheap victory.

Matty Starr came to the ring next to announce that he had the night off and started proclaiming that since he beat Hardcore Craig last month that he is the king of hardcore. He was dancing around the ring and patting himself on the back until ECW legend, Tommy Dreamer, came to the ring and cancelled his party of one. Tommy challenged him to a match and the two proceeded to try to beat the crap out of each other. In one spot Dreamer took the ring bell and placed it on Matty’s crotch and then rang his bell not once but twice. A chair made an appearance in a couple of spots and Matty actually was able to keep up with Dreamer for most of the match until Dreamer found an opening to nail Matty with a DDT and covered him for three.

Jimmy Rockwell was given his rematch to try to reclaim the No Limits title he lost to Mr. 450. Melanie Cruise came to the ring with Rockwell but she was still fuming over her loss earlier in the evening and wasn’t helping Rockwell at all. With no one to help him cheat to win, Rockwell didn’t get the outcome he wanted in the match and fell to the 450 splash which seemed to amuse Melanie.

Hardcore Craig and Ruff Crossing teamed up to battle two of the Three Rings (Grin and Judas). Tony Scarpone was the special enforcer at ringside who was supposed to keep the Rings from cheating but during the match Billy Whack came out with some masked goons and they beat the crap out of Tony and left him laying. The match was declared a no contest and thrown out.

The main event was a 20 man battle royal. Buddy Roberts Jr. and Zach Thompson were among the early entrants and a new guy came out every 30 seconds. Like all battle royals, it was chaos and every man for himself. Not only did the regulars battle but Pauly Thomaselli made his return to Blitz as a participant. Andre the announcer also was involved but he was tossed out in about one minute. Melanie Cruise was the only female in the match and she didn’t last long either but did manage to throw Jimmy Rockwell out of the ring to eliminate him which got the biggest pop of the night. Tommy Dreamer also got in on the action and knocked down everyone in the ring and continued to help eliminate people until near the end. Machine ended up winning the match as he was tossed out but never touched the floor before he rolled back in, rolled back out and waited until no one expected it and tossed out the last two guys. Machine now gets a title shot at the next show.

Once again Pro Wrestling Blitz delivered an excellent show that pleased the fans and further advanced some interesting story lines. Next month’s show should be a hot one as it is their biggest show of the year and they have some good matches set up for it.