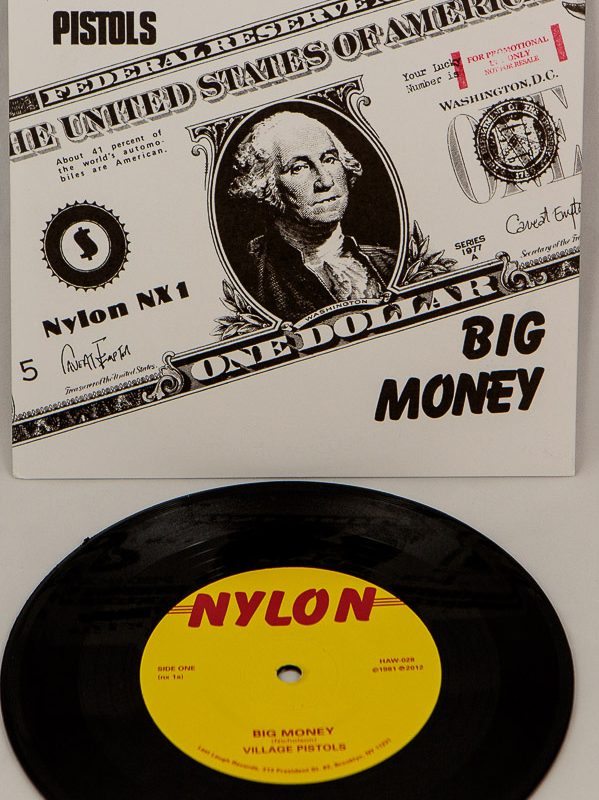 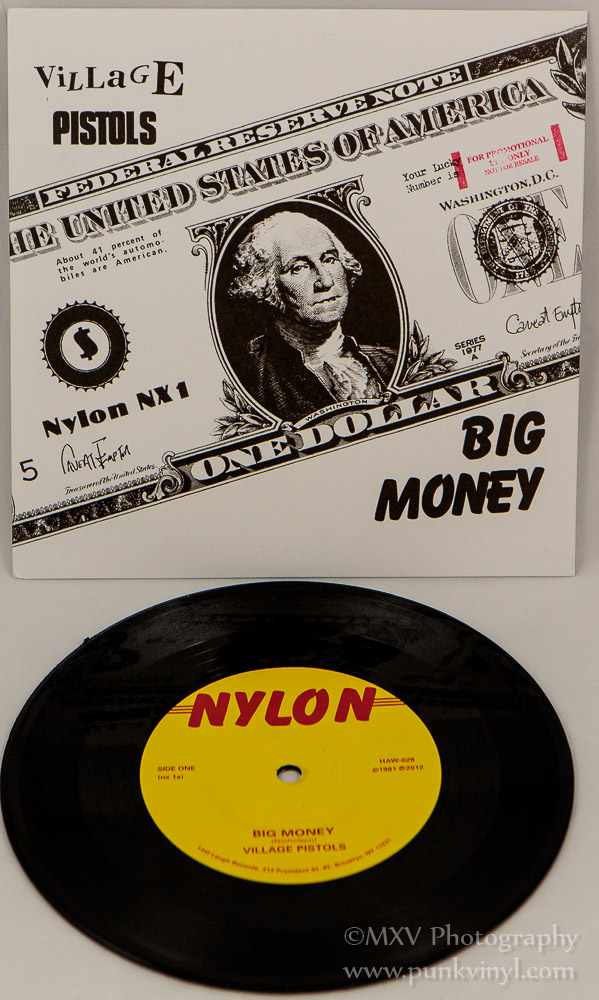 If there was ever a “Killed By Death” (KBD for short) hall of fame then the Village Pistols – Big Money 7″ would have to be included in it. For the uninitiated, Killed By Death was a series of bootleg compilations that compiled very rare and obscure punk singles onto a single LP. The purpose of these compilations was two-fold; it exposed punk rock fans to music they may not have heard before or otherwise couldn’t access easily and it also inevitably boosted the value of the bootlegger’s record collection and drove up the prices of records that might otherwise have little resale value. While personally I despise the financial implications of those compilations I do appreciate that it turned me onto some pretty great, obscure punk that I otherwise never would have heard of, and I don’t even own a single copy of that compilation! The Village Pistols one and only 7″ single was comped on an early KBD record and that indirectly turned me onto the band and the single.

The Village Pistols was a short-lived punk rock band from North Carolina who never went anywhere and mostly disbanded even before they committed any of their music to tape. Their name seemed to come from a mixture of the Village People and the Sex Pistols. They were very loud, kinda sloppy and they played fast. Had they stuck around for any length of time they may have actually been discovered by neighboring punk scenes and been a bigger part of the early hardcore movement had they continued to put out any records. Sadly, however, that didn’t happen but they did manage to release a 7″ single around the time they called it quits. The story goes that the label had pressed 1000 of them but at least half of the pressing was warped and returned to the plant for a refund so what could have been a rare but not that difficult to track down a copy of single became a lot more scarce and as a result (and thanks to the posthumous popularity of this single two decades later) this record is very hard to find and commands a hefty sum of money to obtain.The 7″ had two songs on it: the title track which was an original composition of fast, loud, and raw punk rock that is well worth the big money the original commands (which I’d love to own but don’t have the big money to obtain it), and a cover of The Beatles’, “Strawberry Fields” that you’d be hard pressed to distinguish as a Beatles song due to how much they punk it up in their loud, fast, and reckless way.

Aside from being bootlegged on the aforementioned KBD comp, the Village Pistols single was unavailable for pretty much its entire existence. Thirteen years ago there was an official Village Pistols LP that compiled the single along with a bunch of live tracks but that too was pretty short-lived, was an import, and the live tracks were pretty disposable and not very good quality. Someone really just needed to reissue the 7″ but no one stepped up to the plate until now. Last Laugh Records, a label that specializes in reissuing very obscure punk and power-pop records has given this little punk nugget a very nice and proper vinyl reissue.

The single comes in a glued pocket sleeve that comes on a nice, thick cardstock (unlike the thin sleeve of the original pressing). This one will be far less susceptible to damage compared to the original pressing. The record is on black vinyl and has red and yellow labels that look nearly identical to the original except for some of the information has changed to reflect the Last Laugh label. The music sounds identical of course and it sounds great. This single epitomizes everything great about early punk rock/hardcore and it is a must for any fan of the genre. I’ve wanted a copy of this record for years but unless I win the lottery I’ll never be able to afford it. I’m grateful that someone cared enough to reissue this and offer it to the masses for less than the price of eating out for dinner.  If you have a turntable and love early punk rock then do yourself a favor and grab one of these before they are gone again, you’ll be glad you did. Thank you Last Laugh Records for giving me my Village Pistols fix without it having to sell my soul and half my earthly possessions to get it!