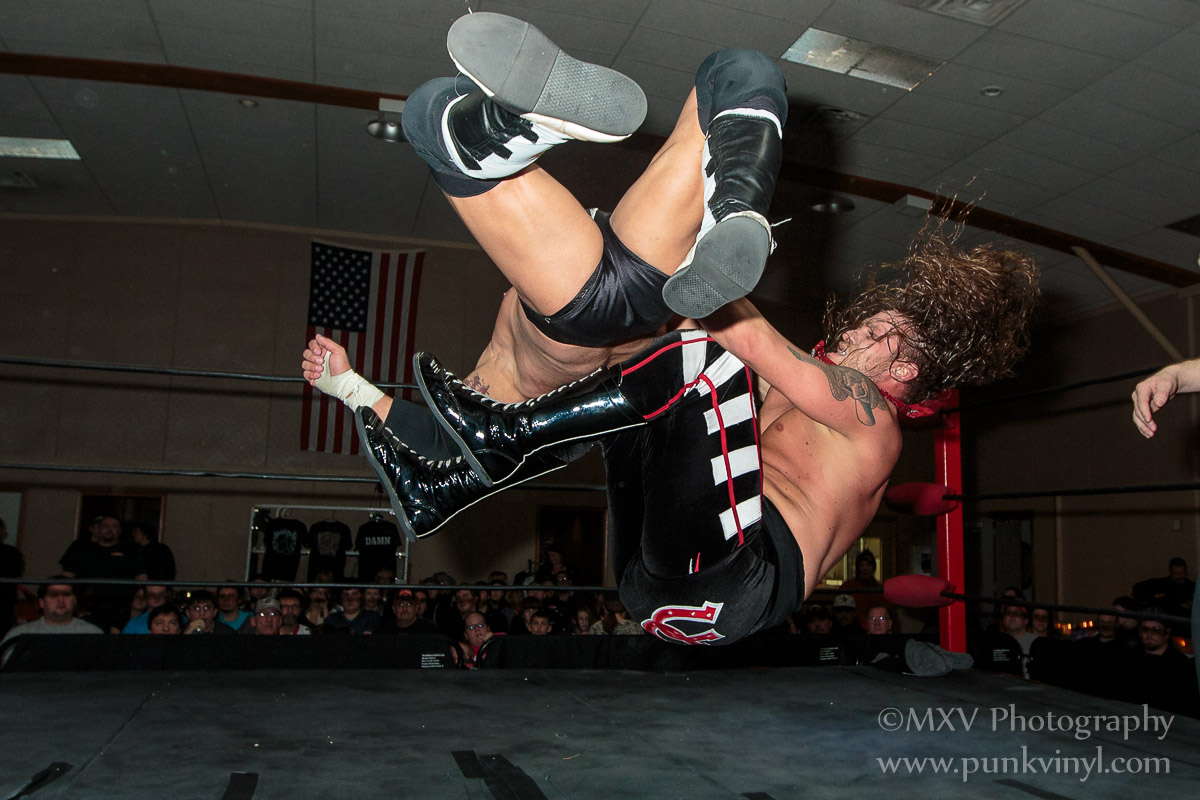 If you live in the Chicagoland area you’d have to agree that there is no more appropriately named event for a wrestling show in January than Dead of Winter. This annual Pro Wrestling Blitz event happened Saturday night. Luckily the weather was just mild enough to make travel easy which led to a large crowd of fans attending and keeping warm with some great wrestling action.

The show started with the coronation ceremony for The Shogun Chris Logan who won the King of Joliet tournament last month. He was awarded the medal (which was awfully small for a King) and he was offended at how miniscule it was and made it abundantly clear to Blitz owner Tony Scarpone. He then demanded that Tony bow before him and tried to superkick him but Tony was able to grab Logan’s foot and block him and then knocked him on his ass for good measure. A pissed off Scarpone said he was ending his year-long hiatus from wrestling and that he was going to have a match with Logan at next month’s show. The fans popped big time for that announcement.

The first match was a tag team bout between The Elite (Zach Thompson and Ryan Slade) and the team of Buddy Roberts Jr. and Barry Ryte. The Elite has had their share of problems lately as they feel that Ryan Slade has been turning his back on the group and going into business for himself. Ryan, of course, denies this. This match was high on the action and fast-paced. Buddy and Barry got the win which led to a furious Matty Starr to come out and confront Slade to blame him for everything that has gone wrong for The Elite lately. Ryan had enough and let him have it which won over the entire audience. Zach tried to attack Ryan as well and got a little ass kicking for his troubles as well. This should easily cement Slade as a babyface moving forward.

Dynamite Jackson and Jimmy Rockwell had a singles match. Dynamite is a high flyer with a lot of flashy kicks and he worked at high speeds. Rockwell was his usual sleazy self and cheated whenever possible. Rockwell took the win.

Blitz is adding tag titles this year so a tournament is getting started to determine what team will be the first champions. In a triple threat tag-team match, The 3 Rings (Machine and Judas), Hardcore Craig and Pauly Thomaselli and If Looks Could Kill beat each other senseless to win a coveted spot in the tourney. The action was frantic with a lot of tags between the various teams and at one point early in the match Craig and Pauly had to face each other. They tried to one-up each other by hitting chops on each other before they turned the tables on the two heel teams and tagged a couple of them in. If Looks Could Kill were the first ones eliminated but instead of leaving peacefully they attacked Craig and Pauly and beat them down enough that they were too weak to put up enough fight to beat the 3 Rings. Machine/Judas got the win.

Since commissioner Brooks once again allowed intergender matches in Blitz, Melanie Cruise wasted no time finding herself a new opponent in the No Limits champion, Matty Starr. Matty was his usual arrogant self and seemed to have no problem beating up on a girl. Much to his chagrin, Melanie can take a lot of punishment and give it back just as heavy and she dominated a lot of the match. Fearful of losing his belt and sore from the punishment that Melanie was dishing out, Matty got himself counted out on purpose so he wouldn’t lose the title. Melanie was pissed and so were the fans.

Clowns did battle in the next match as Grin of the 3 Rings squared off against the mysterious clown, Yabo. Yabo came to Ruff Crossing’s aid last month and no one knew what to make of him. Yabo apparently issued a challenge to any of the 3 Rings and Grin was the one who answered it. Grin probably figured there wasn’t enough room for two clowns in Blitz and hoped to take Yabo out. Yabo is even more out there than Grin and he put up one hell of a good fight and Grin was outmatched. At one point  Yabo climbed to the top rope and then walked across it like a high wire to the center point and nailed Grin with a huge flying leg drop which had to be hard to do in those giant clown shoes.  Yabo won the match and it will be interesting to see how this all plays out at future shows. He’s definitely a very interesting character and fun to watch.

In the main event ,Ruff Crossing faced Vic Capri for the Blitz title. Unfortunately for Ruff he wasn’t just facing Vic but Billy Whack and Chris Logan. Vic and Ruff were having a pretty epic battle when the referee inadvertently got too close to the wrestlers and got knocked out by some swinging legs While he was out Chris Logan came to the ring and interfered which gave Vic Capri the opening he needed to win the match and become the new champion. Billy Whack was elated and he was gloating outside the ring while holding up both the Blitz title as well as the LWF title. Ruff was furious and started beating up on anyone who came near him which included the referee and commissioner Brooks. He almost decked Tony Scarpone too when he came out to try to calm him down but the defeated Ruff Crossing held back and stormed out of the ring looking to get some revenge for getting cheated out of his title.

Dead of Winter was an excellent wrestling show that had fun matches from start to finish. They built up a lot of excitement with this show with the debut of Yabo and a world title change, not to mention the possibilities that this tag team tournament holds.

Check out additional photos from Dead of Winter here!