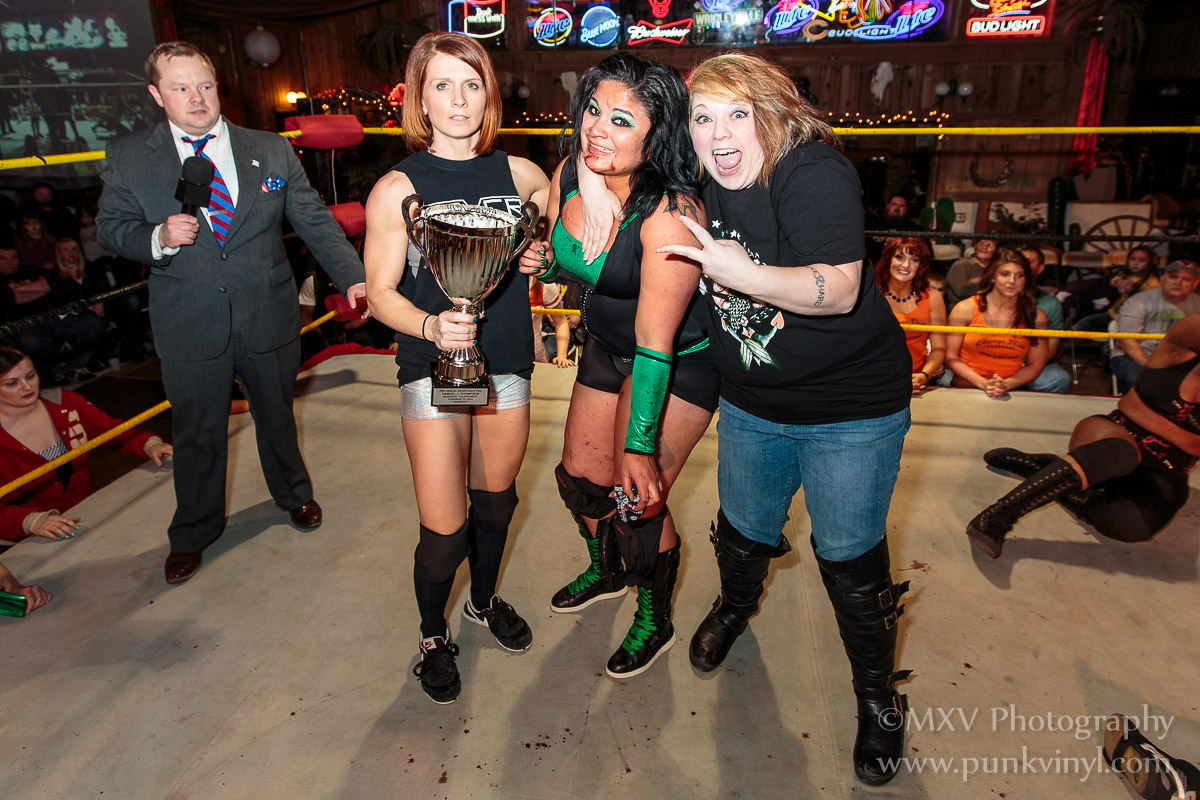 First they name an event after a Pantera album last month and now they come back with another event named after a Motley Crue song. Resistance Pro Wrestling really is the rock and wrestling connection, both in having Billy Corgan as their creative director and now with the name of their recent events. Girls Girls Girls took place Saturday night and it also was the second annual Samuel J. Thompson Memorial Cup where eight wrestlers (this time all female) competed in a tournament to win a contract with RPro.

In the first round of the cup, Devyn Nicole won her match against Angle Dust to advance in the tournament. All the qualifying round matches had a five-minute time limit and this fast paced match was over in about half that time.

In the second match, Ray Lyn came dancing to the ring and started twerking inside of it. Her opponent, Starr Venus seemed rather annoyed with her and wanted to get their match started. Ray wasn’t having any of it and said she wasn’t interested in wrestling, she was there to dance and resumed shaking her ass in every direction. Starr ran out of patience and punched her right in the head and knocked her out and picked up the three count. The match literally lasted for about ten seconds and three of them included the pin count! Everyone was cracking up at Ray’s quick loss.

The Ego Robert Anthony came to the ring and looked really angry and he had every reason to be for not only did he lose the heavyweight title last month to Jocephus, but his opponent for the night, Ashton Vuitton was unable to make it to the venue that evening which left Ego with no one to vent his frustrations on. He issued a challenge to anyone in the back to come out and fight him and Body Magic’s, Eric St. Vaughn,  came out and answered the challenge. He got right up in Ego’s face which was a mistake as Ego kicked him and then nailed him with a death valley driver and that was the end of ESV. Ego then said he wanted another challenger and Jake O’Neill came out to answer the challenge and he had his “man-servant” Scotty Young with him. Ego and Jake put on a phenomenal match that was the true highlight of the evening. It was a no-DQ match and at one point Jake enlisted the aid of his man-servant to help turn the tables in his favor. Scotty wanted no part of it and ended up turning on Jake but despite all the chaos, Jake was able to steal a win from Ego which only made him angrier. Ego’s clearly losing it and isn’t dealing with the loss of his title very well at all.

In the next round of the Thompson Cup, Amazing Maria and Heather Owens got so consumed with beating each other senseless outside the ring that they both got counted out and neither one advanced in the tournament! Heather took a couple of sick looking bumps on the apron too but it didn’t slow her down one bit.

Amanda Rodriguez faced Samantha Heights in the final qualifying match. These two went at it hard and the match ended when Rodriguez pulled out a chain and instead of using it on Samantha, she threw it to her so when the referee turned around he caught Samantha holding the chain and disqualified her.

Next up was a “pick your poison, pal” battle royale with ten men competing for the right to pick their own opponent and match at the next show. The action was chaotic and it was hard to follow it all because so much of it was happening at once but when bodies started flying out of the ring as people got eliminated it was easier to follow and it came down to Scotty Young and Mad Man Pondo being the last two left. It seemed likely the larger, Pondo would win but Scotty pulled the ropes down as Pondo came at him and Pondo went sailing over them and landed on the floor, losing the match. Jake O’Neill was there to try to make Scotty’s life a living hell some more but Scotty told him that the 100 days expired a half hour ago and he no longer has to be his man-servant. He also said the poison he is picking next month is Jake and that he’ll see him in the ring at the next show. The crowd loved it and roared with applause for this news.

After an intermission, Jocephus came to the ring and gave a concert to the crowd where he sang while his companion, Eve, played the keyboards. It was awfully twisted and rather funny to see this big giant bearded man bellowing like a lounge singer. Most of the audience were scratching their heads in disbelief while others   would yell out “I Am the Way” which is one of Jocephus’ catchphrases.

Da Soul Touchaz defended their tag titles against the beloved Team I.O.U.. This match was high on the comedy as well as the action. Team I.O.U. used some deceptive tactics in attempt to win the gold and they spent a very long time double teaming Big Willie before he finally was able to tag himself out to Acid Jazz and the action heated up even more. The match ended when Willie nailed a flying leg drop off the top rope and got the pin! To see a man his size fly through the air like that was equal parts amazing and frightening.

The three winners of the first round of the tournament faced each other in a three-way dance match to determine who would win the Thompson cup and the contract. The action was messy but short and a bloodied Starr Venus won the match and will be the newest member of the RPro roster. When she won, D’Arcy Dixon presented her with the cup and posed for some photos with her. Mickie Knuckles quickly came to the ring and photo bombed them and insisted she be in the pictures too. After the photos were taken she clocked Starr in the head with the cup and then tried to make a beeline for D’Arcy. All the women of RPro were at ringside and came into the ring and sided up with whatever wrestler they liked better and two big factions of ladies were standing face to face ready to explode into battle. It was broken up before chaos ensued but clearly there’s going to be a match or matches next month based on this confrontation.

The second annual Samuel Thompson memorial cup show, Girls Girls Girls, wasn’t your typical wrestling show and it made for a lot of fun and a great crowd turned out for it. The show was for a good cause and not only did the roster put on an entertaining show but they paid tribute to Sam Thompson to prove that Sam will never be forgotten and that he made a lasting impression on everyone.