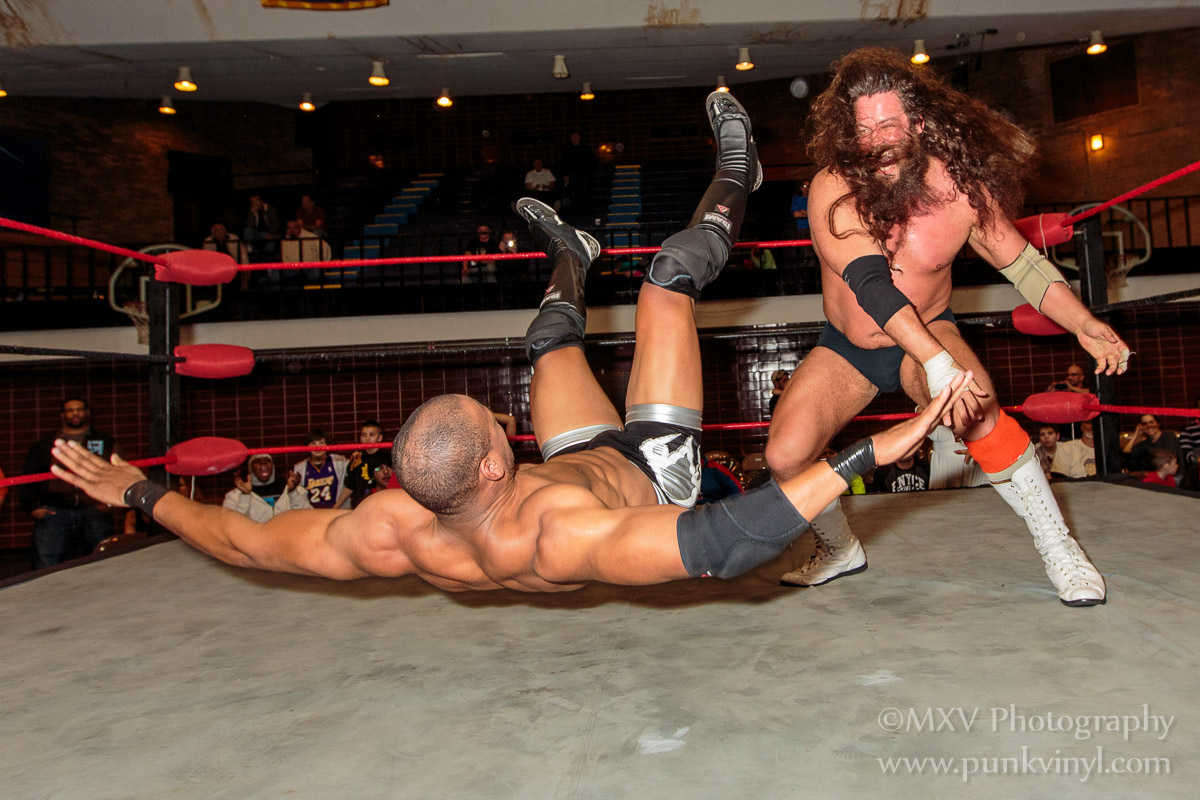 Friday night, Resistance Pro headed south for their most recent event, The Battle Rages On. This time it was at Saint Frances De Sales High School which was about a block away from Indiana. The event was also a fund-raiser for the school so on top of entertaining the fans in their usual high quality manner, the show was also for a good cause.

They had two dark matches to start the show. A singles match and a tag match. Simply Sexy Shawn Blaze won the first match and fan favorites and RPro regulars, Team I.O.U. won the second.

Rpro champion, Jocephus, along with his lady, Eve, started the official show off by putting on a musical performance. They had a guy playing guitar while Eve played the keyboard and Jocephus did his best Jim Morrison impression. He paced back and forth and wailed away and it all made very little sense. It was too much for Da Soul Touchaz manager, C-Red, to take and he came out saying he wasn’t about to let Jocephus be disrespectful and got up in his face to stop him. Eve got right back up in C-Red’s face which gave Jocephus a chance to grab Red and choke slam him. Da Soul Touchaz and Da Cobra came running to the ring to C-Red’s aid and Jocehpus took off after accepting a challenge from Marshe Rockett.

John Skyler and Da Cobra tore the house down in the opening match. These guys had a really exciting match with a lot of action, a lot of back and forth spots and some really flashy moves. They were very evenly matched which seemed to frustrate Skyler to the point that he just flat-out cheated to win. Fantastic work by both men in this bout.

In a continuation of the feud that never ends (and never gets boring), Jake O’Neill and Scotty Young beat the hell out of each other in another solid wrestling match that was pretty heavy on the wrestling. These two put together yet another exciting match and while the dirty tactics of O’Neill got him the win this time around it certainly won’t close the book on this feud and the real winners of this are the fans!

A whole gaggle of ladies did battle in a five on five “Captain Falls Match”. The rules state that if someone is pinned or submits they are eliminated but the only way to actually win a match is when the captain of the team is eliminated. The two captains were D’Arcy Dixon and Mickie Knuckles, who just so happen to hate each other and have been feuding for months over the women’s title.  Most of D’Arcy’s team got eliminated quickly leaving her to do all the heavy lifting (literally). As one could guess the last two women standing were the two captains (who wisely didn’t participate until the end when everyone else was eliminated) and Mickie went to town beating the crap out of D’Arcy. D’Arcy is as tough a competitor as they come and is even tougher than a lot of the guys. She fought like crazy and took a lot of punishment in the process and never gave up. This pissed off the rather unbalanced Mickie to the point that she grabbed a chair and battered D’Arcy with it. The match was ended and D’Arcy’s team got the win by DQ but miss Dixon was worse for wear after this one.

Colonel Jesse Corgan came out with Miss Prig and had a statement to read. It started as an apology that turned into a threat for future violence. It was pretty humorous how he started off very somber and serious before his apologies got more insulting and ridiculous.

A fatal four-way match for the Saint Francis de Sales house cup saw Matt Knicks, Chris Castro, Suge D, and Raphael King do battle. It was every man for himself which caused some friction between Knicks and Castro as they are normally a tag team. Their constant arguing, along with King’s opportunistic offense left Suge D to emerge victorious. The match was full of a lot of fun spots that often took down everyone.

The Ego Robert Anthony faced former WWE Superstar Bobby Lashley in a match that went all over the room. These guys started off with some technical wrestling and it quickly escalated into a brawl that spilled out into the crowd and all over the gymnasium.  Ego, still pissed off from recently losing the RPro title, tried to vent his frustration on Lashley but the big man was able to take everything he dished out and gave it all right back to him. Ego tried to use a chair to cheat his way to victory but that backfired and Lashley speared him and got the win.

The newly expanded Body Magic that now includes Brady Pierce and Ray Lyn faced Da Soul Touchaz in a fast-paced tag match. Da Soul Touchaz are easily the most popular team on the roster and proved why they are the tag team champions when they soundly beat Body Magic and sent them packing with their heads held low in defeat.

In the main event, Jocephus defended his RPro title against Marshe Rockett. Marshe not only took the fight to the monster but he was controlling a lot of the match. These guys hit each other with every move and hold you can think of and no matter what kind of beating Jocephus gave to Marshe, he’d fight back and regain control! This really drove Brody crazy and outside the ring Eve was even more concerned. Jocephus even busted out a claw hold twice during the match! This spot would have made both Fritz Von Erich and Baron Von Rashke proud! Marshe was looking poised to be the next RPro champion when the twin brother of referee Robert King, Justin, hopped up on the apron and interrupted the match. Robert got into a shouting match with his brother which gave Eve a chance to distract Marshe long enough for Jocephus to nail him with his finisher and win the match, retaining his title.

The Battle Rages On featured a lot of really good battles and it was a very entertaining wrestling show from start to finish. They also set the stage for some good matches at the next show so it will be exciting to watch how these stories continue at next month’s show.

Check out additional photos from The Battle Rages On right here!