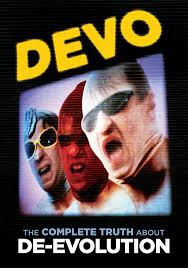 Devo – The Complete Truth About De-Evolution DVD
MVD Visual
Devo has had a pretty amazing career and are definitely one of the most unusual bands in history. They started out in the early punk days but weren’t really punk rock, they were more of a new wave band but even that wasn’t totally accurate. However you want to describe them, the band was loved by many punk rockers, eventually had a top 40 hit and were embraced (at least briefly) by the mainstream and the band name was even used as an insult by dim wits and jocks when they were accosting punkers (“Hey Devo” was usually followed by a punch to the face or followed up with some other politically incorrect insult ). The band was quirky, innovative, prolific and amazingly creative. They were also at times campy and always had a good sense of humor along with a pretty solid discography.

If you are old enough to have grown up through the 1980s then you will also remember a time when music videos became a big thing. Suddenly it wasn’t enough to just make records and have songs played on the radio, you needed to make videos too and hopefully have them shown on some television show such as Night Flight or on this new cable network that took the world by storm called MTV. Young readers may not be aware that the “M” in MTV once stood for music and the network showed music videos all day, every day, and all night too. Bands both big and small made videos, many of which got shown on the network and many that didn’t.  For a visually interesting and unique band like Devo, the music video seemed to be a perfect fit and the band actually made a lot of videos over the years, many of which I never knew existed! What’s equally amazing is that they didn’t do a video for “Uncontrollable Urge’ which if you ask me is their absolutely best song.

Since nobody shows music videos anymore, the only place to find any these days is places like YouTube. The music video is becoming a dying art. Sure people still make them but they don’t have the reach or the avenues they once did so most bands don’t even bother with them anymore unless they have some huge label willing to shell out the money to still make them which is a fraction of what it once was.

Devo dug up a video time capsule and decided to compile their videography on a DVD and release it (as well as preserve it) along with some neat extras. The Complete Truth About De-Evolution is a compilation of 20 Devo music videos, presented chronologically, along with some other video artifacts thrown in for good measure. Just like the band, the videos are quirky, goofy, colorful, and fun. They really showed off the band’s creative side and few, if any, were done on a large budget. It could be described as a visual greatest hits except that they didn’t necessarily do videos for what would now be compiled on a greatest hits compilation (though obvious hits like “Whip It” did have videos which are included here).  Sitting through the videos from start to finish was a nice trip through much of the career and (De-)Evolution of the band. It was also interesting to see how the visual quality got better as you progress through them which probably has to do with the budget they were made on.

The entire DVD is presented in 4:3 video (full frame) as that is how all the material was originally filmed and presented. The visual quality of the individual videos ranges from very good to excellent and it really is just a matter of what they were shot with. The earliest stuff shows its age a little more in grain and softness but it is the best quality presentation possible for the material. Extras include live footage, some laserdisc ad spots, and some cool and informative slide shows. Of particular interest was the one that told the story of the cover art for their first album (but sadly didn’t explain why they used different cover art for the European versions of it). For hardcore Devo fans there is really some neat stuff on here and even some commentary by two of the band members.

If you are a Devo fan then this DVD is a must. I’ve always liked it when bands release DVDs of all their videos and for a band like Devo, whose visuals are so much a part of who they are,  I’m surprised that this didn’t happen sooner!