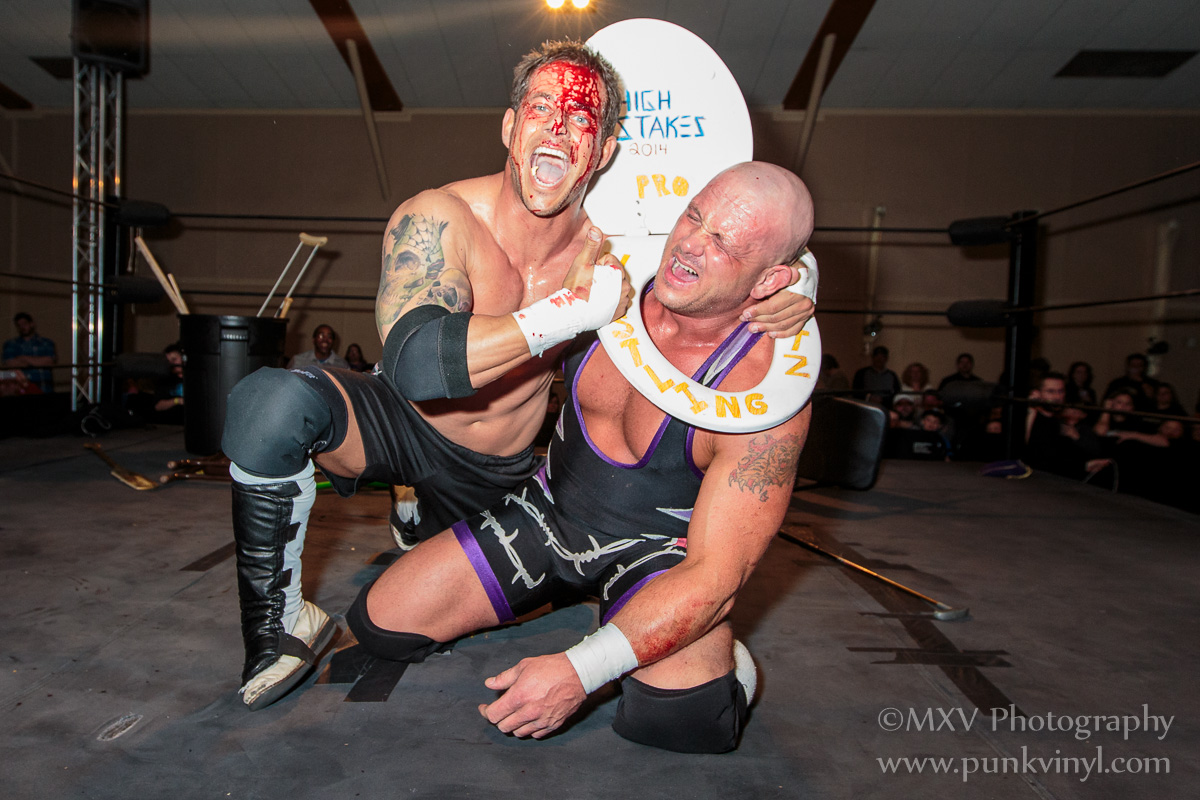 It was the fourth Saturday of the month which meant it was time for the latest Pro Wrestling Blitz show in  Joliet, IL. The company has been on an amazing hot streak lately with some great stories to match the great action that takes place in the ring. This show’s main event was a hardcore match for the Blitz title where fans got to bring weapons for the two wrestlers to use in their match.

In the first match, Pauly Thomaselli challenged The Shogun Chris Logan for his King of Joliet crown. These two faced off in the tournament and Pauly felt cheated so he wanted a rematch. These two guys put together a very solid match with neither one maintaining control for very long. Pauly prevailed in the end after nailing Logan with a 450 off the top rope to the delight of the entire audience.

Marshe Rockett made his Blitz début and did it in a big way by facing Matty Starr for the No Limits title. When Marshe came out, Zach Thompson attacked him before he could get in the ring in hopes of softening him up for Matty to beat. Marshe was having none of that and quickly fought off Zach and then entered the ring to start his match. He was on fire and started out strong. Matty and his manager, Mr. Flores, tried to cheat in order to turn the tables on him but Marshe kept control for much of the match. Not only did Marshe successfully keep control of the match but he also won it and became the new No Limits champion! Matty was pissed which made the crowd even happier than seeing this exciting fan-favorite win that title. With the fans already behind him, Marshe should have a good run moving forward as he defends his newly won belt.

The giant Reese faced not one, not two, but four Masked Bonanzas in a handicap match. These masked fools had no hope of taking the big man off his feet, let alone keeping him there for a three count. Reese choke slammed and tossed them all around like rag dolls until he grew bored and then pinned one of them. After the match he slammed one or two more for good measure until Tony Scarpone came to the ring and waffled him with a chair and sent him packing.

Grin and the newest member of The 3 Rings, Sinister, took on Buddy Roberts Jr. and Barry Ryte in a tag-team match. Sinister is a lot like Kane or the Undertaker in his appearance and mannerisms. There was clearly some sort of disconnect between the team of Barry and Buddy as they just couldn’t get it together to work as a team. This cost them the match and resulted in Barry and Buddy attacking each other and beating each other all the way backstage. Throughout the night they’d cut to footage back stage and those two were still fighting each other each time. It’s a safe bet they are still outside somewhere fighting each other as you read this!

Nick Cutler emerged victorious in a four-way match with the no-longer-a-3-Ring Judas, Zach Thompson of The Elite, and Dynamite Jackson. This match had a lot of action and Cutler was the smartest of the bunch by staying out of a lot of it and picking his spots to come in and take advantage of an opportunity. When it came down to just him and Jackson, he leveled him and got the pin.

Billy Whack came to the ring presumably to present the LWF title to whoever ends up winning the match between Clancy and Jimmy Rockwell. The match was somewhat short and resulted in Clancy getting another win! He’s got himself a streak going now. Billy Whack came into the ring after the match and revealed that there was no way he’d be offering up such a prestigious title but what he did present was the old LWF “Hot Potato” belt. This belt looks like a kindergartener art project made up of random things in the room. The premise of the belt is that it is given to the biggest loser and the only way to get rid of it is to beat someone who then gives them the burden of having that belt. Jimmy was humiliated and everyone had a big laugh at his expense. This is probably the only match in history where the winner was relieved to not have won a title.

Melanie Cruise faced her biggest challenge to date in an intergender match when she had to face the monster, Machine! Melanie came to the ring with her arm in a sling and was clearly nursing an injury but she refused to miss an opportunity. She put up a hell of a fight at the beginning and even had Machine reeling for a bit but he soon turned the tables on her by attacking her damaged wing and going to town on it. He put her in a hold where he pretty much was trying to rip her arm right off of her body and she had no choice but to either submit, or lose her damaged limb. She wisely chose to submit. Machine seemed pretty proud of himself and Melanie looked way worse for wear. Melanie is tough though and likely won’t let this stop her.

In the main event, Hardcore Craig challenged Vic Capri for the Blitz title. This was a hardcore match, no rules, and fans brought weapons for the wrestlers to use. Ruff Crossing was brought in as the special referee. This match was brutal in every way imaginable. Craig took an early lead in the match and had Vic bleeding profusely in about four minutes as he pounded on him with garbage can lids, cookies sheets, hockey sticks, and you name it. The loss of blood seemed to only ignite a fire in Vic who gave it right back to Craig in spades. He beat Craig with chairs, a toilet seat, a ladder, and anything else within reach. These two attempted to murder each other for easily a half hour and when Vic opened up Craig’s head it was gushing blood like a water fountain for the rest of the match. How Craig didn’t bleed out and die will go down as one of life’s great mysteries. They introduced thousands of thumbtacks to the ring and dumped each other on them off of a ladder, they had a chair wrapped in barbed wire and they even had a ladder spot where Craig choke slammed Vic off the ladder through the announcer table! These two are legitimately crazy to put each other through such hell but the fans sure enjoyed it as they were on their feet for almost the entire match. The carnage ended when Vic did a piledriver on Craig off the ropes into a table. This match was sick and the fans went crazy the entire time.

When the match was over and the bloody Craig left the ring, Commissioner Broox came out and reinstated Ruff Crossing. Ruff’s first order of business was to demand that Vic Capri give him a rematch for the title at the next show. Vic came out and answered the challenge and Broox made it official for next months’ show (May 24th).

High Stakes ended on a bloody note with the promise of another good main event for the next show and it was a really great show from start to finish.