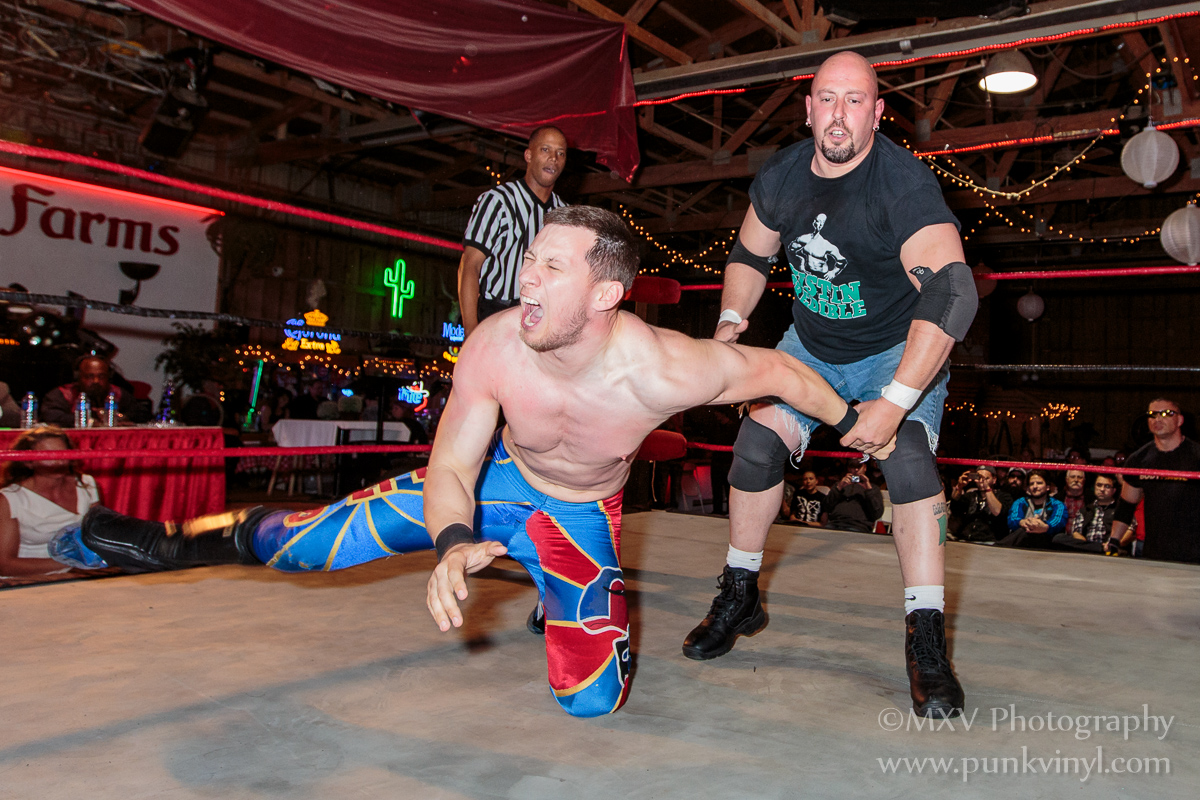 Resistance Pro Wrestling returned to the Arabian Knights barn in Willowbroook on Friday night to present, Savage Amusement. The show featured some RPro regulars as well as some newer faces and that afternoon the word came out that AMC picked up a reality show based on the company! Excitement was definitely in the air and it translated to some entertaining wrestling matches!

After a dark match the show got under way with a “special” musical performance by RPRo heavyweight champion, Jocephus. He was joined by Eve on keyboards and an unnamed guitarist. The band played a somewhat repetitive number while Jocephus wailed away, slowly at first. After a couple of minutes they picked up the pace and Jocephus started really yelling and turning up the power in his vocal delivery. It actually got pretty enjoyable at this point and fans in the audience who like harder styles of music seemed to enjoy it. While the whole thing was puzzling, it was unique and ended well. Some fans were rather intimidated and downright frightened at key points where Jocephus would get right up in their faces while yelling.

Three ladies of RPro had the first match of the evening in a three-way dance.  Thunderkitty, Hardcore Heather Owens, and the returning Crazy Mary Dobson did battle in a fun match full of dual, and triple move action. Mary and Thunderkitty started off with a temporary alliance against Heather but that soon ended once any chance of pinning Heather took place. In a humorous moment during an argument between Kitty and Mary about who should be the one pinning Heather, Thunderkitty proclaimed that she is older and Mary should listen to her. A quick pin on a downed Heather got Crazy Mary the win. Excellent work by all three ladies.

The newest inmate of Warden Myers, Remi, took on Scotty Young in the second match. Scotty probably wished that he was still facing Jake O’Neill instead as Remi gave him quite a beat down. Remi looked vicious in this match and while Scotty put up a fight, Remi was relentless and made rather short work of Young. After the match, Warden Myers and Remi each took turns explaining to the crowd how they will regain the titles that Lock Up lost. This hints that there is likely another inmate in the prison that the Warden is going to be putting to work soon.

In a mini tournament to determine who would face Da Soul Touchaz in a title match in the main event, Jake O’Neill and Pondo faced Brady Pierce and former ECW/WWE Superstar Justin Credible! It was great to see Justin in the ring again and he and Brady really brought the fight in their quest to become tag champions. They were successful in this first round as they won this match to advance.

In the next tourney match, The Ego Robert Anthony and Jocephus formed an unlikely alliance against Two Star Heroes. Two Star couldn’t stay on the same page and their internal conflicts cost them the match and came to a head after the loss when Castro shoved Knicks to the mat and challenged him to a fight. The bewildered Knicks rolled out of the ring and walked away instead of fighting his partner. Jocephus did most of the work for his team and dominated most of the match and Ego looked like he didn’t want anything to do with being on a team with Jocephus.

A fatal four-way match really turned up the heat in the barn as Da Cobra (with Justin King in his corner), Mr. 450, Marshe Rockett and Special Dark (Suge D of the former Lock Up) tore the roof of the barn with a fast-paced, action filled match. These guys were all over the place in single, double, and triple teaming against each other. People dove over ropes, jumped off turnbuckles and threw everything but the kitchen sink at each other. When the dust finally settled, Mr. 450 landed his namesake finisher and got the win. This match was fun from start to finish and gave everyone their money’s worth. After the match Mr. 450 said he is coming for Jocephus’ title.

Miss Prig escorted a “blind” Colonel Jesse Corgan to the ring and Jesse apologized to the crowd for his being blind and no one seemed to believe him. Miss Prig then did a dance with some feathers and kept at it until Billy Corgan came out and cut her off. He then called Jesse out on faking being blind and in a very humorous exchange which led to Billy telling Jesse he either has to get any of his clients to win three matches in RPro or both he and Miss Prig will be fired from RPro forever.

Paloma Starr had the biggest match of her short career so far in Resistance Pro when she challenged Mickie Knuckles for the women’s title. These to beat the hell out of each other, much of it out on the arena floor and Paloma proved she was almost as tough as Mickie as she didn’t go down easy, or without a big fight. In the end, Mickie proved the tougher lady and retained her title. After the match Mickie shook Paloma’s hand in a sign of respect and she also licked the referee.

In the tournament final, Jocephus and Ego faced Brady Pierce and Justin Credible. This was a fairly long and grueling battle as these two teams fought their asses off to get that tag title shot. Ego even participated this time which was pretty crucial as there was no way Jocephus was going to be able to keep Justin and Brady down alone, they were just too tough. Jocephus and Ego got the win but Ego was looking pretty worse for wear and favoring his shoulder thanks to the punishment he endured in the match.

Da Soul Touchaz wasted no time in quickly running out to the ring and getting the action started, hoping to capitalize on their opponents being battle worn from the last match. It worked for a while as they were able to get the upper hand early on but soon lost the advantage and Jocephus and Ego finally seemed to click as a team and not only did they soldier on, they won the titles after Jocephus choke slammed Jaz almost through the mat. Jocephus and Ego were crowned the new tag champs and at first Ego seemed to want little to do with it. To the surprise of everyone, however, Ego took the mic and proclaimed that Jocephus has made him see “the way” and that he is joining him. Now that Ego has drunk Jocephus’ Kool-Aid, Jocephus’ cult has become stronger and now his reign of terror is sure to continue.

Savage Amusement was a fun show with some great wrestling and opened the door for two very interesting scenarios with the new tag champs and with the Warden and his new inmate being on a new quest. The action will unfold next month at Deliverance (Friday June, 13) which could be bad luck for anyone on the RPro roster having to face these monsters.