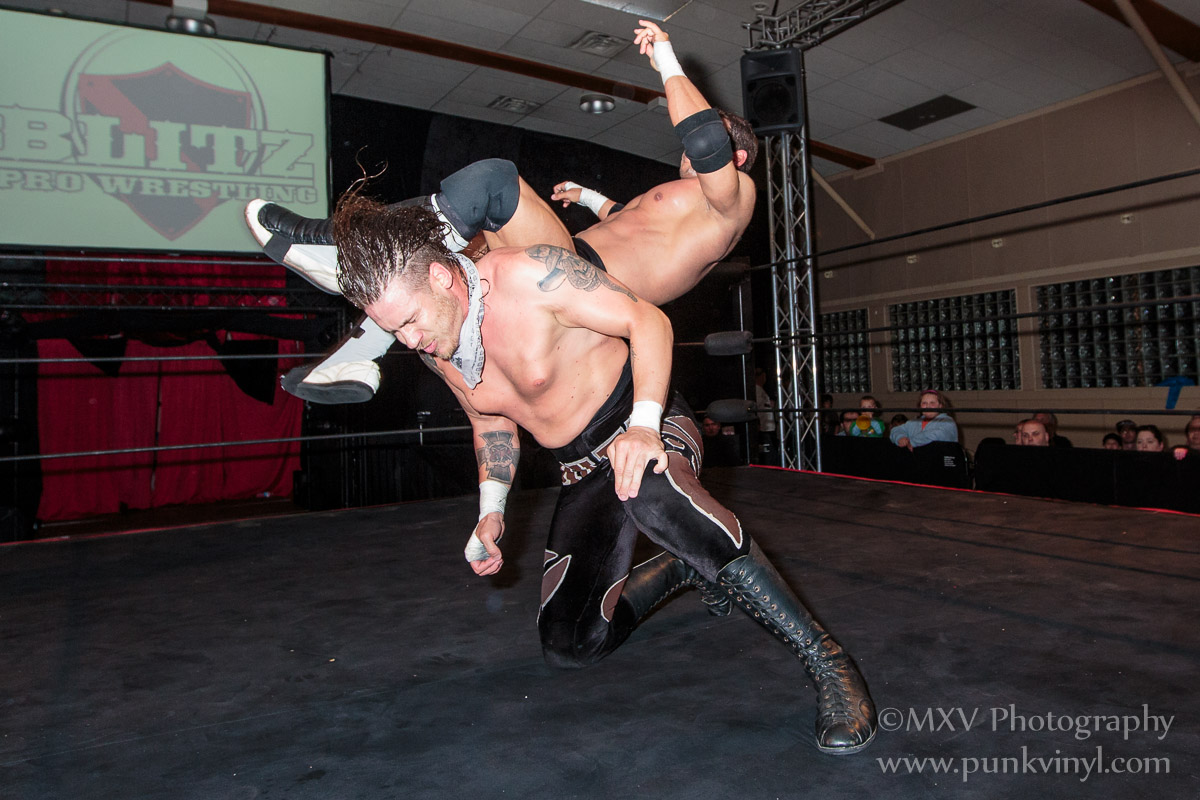 What kind of American holiday weekend would it be without pro wrestling? America’s other pastime was in top form on Saturday Night when Pro Wrestling Blitz presented Hostile Intent. Aside from a great and overdue rematch between Vic Capri and Ruff Crossing for the world title they had The Million Dollar Man, Ted DiBiase as a special guest!

First up was Sinister vs. Clancy. The Ringmaster was so sure that Sinister would have no problem defeating Clancy that he said he was going to the back to attend to some business and wished Clancy good luck in losing. Clancy put up a good fight but was soon overpowered by Sinister. Judas and Magdalena came out to the ring and while Magdalena distracted the referee, Judas nailed Sinister with a missile drop kick from the top rope which allowed Clancy to then pick up Sinister and hit him with a jack hammer which got him the win.

Marshe Rockett defended his No Limits title for the first time against Grin from The 3 Rings. These guys were having a pretty even fight for most of the match and Marshe was wowing the crowd with a few flashy moves. No one had a clear advantage for more than a couple of minutes. During a superplex move where Marshe rolled up Grin, both men’s shoulders were on the mat when the referee counted three. Since it was a double pin it was determined that the title would be held up and that at Wrestlefest,  in August,  the two would have a rematch for the title in a ladder match.

Jimmy Rockwell unsuccessfully tried to lose his “hot potato”belt to Dynamite Jackson as Jackson was just too much for him. Even with interference Rockwell couldn’t keep it together enough to score a pinfall. The burden of this embarrassment of a title is weighing heavily on Jimmy and his win/loss record is starting to suffer for it. He will be going into Wrestlefest still the Hot Potato Champion.

After that match, The Million Dollar Man came to the ring and talked to the crowd while Rockwell was still in the ring. He poked fun at Jimmy’s physique and his unimpressive title and said he would give Jimmy an opportunity to win the million dollar belt. The challenge was if Jimmy could do 20 push-ups the belt would be his. He dropped down and started doing them with relative ease. When he got to 18, The Million Dollar Man stepped on his back and held him down, prevented him from finishing. The fans loved it and Jimmy was once again humiliated. During the intermission the fans had a chance to get their photo taken with The Million Dollar Man.

Melanie Cruise and Judas tagged up to face Machine of The 3 Rings along with big Reese. To say that Melanie and Judas had the size disadvantage would be an understatement. To say that Melanie is afraid of any sized guy would be one as well and her and Judas took the fight to Machine early and used some nice double team moves to get the upper hand. The action was pretty fast and furious and the big guys  more than got their licks in too. Melanie came in off a hot tag during the match like a bat out of hell and actually had Reese reeling but she then tried to prove her strength by picking him up for a body slam (Reese easily weighs about 1100 pounds) and while she did get him up off his feet, he was too much for her to handle and she fell with him landing on top of her which got his team the win. Seeing Melanie pick up someone that size was quite a sight!

In a six-man tag match, Hardcore Craig and Pauly Thomaselli partnered up with Ryan Slade to take on Matty Starr, Nick Cutler, and William Jacobs. This was a chaotic match with Craig/Pauly/Slade getting the early advantage but soon losing it to the cheating tactics of their opponents. If you blinked you were likely to miss something as the action was fast and furious through the entire match. Much to the dismay of the fans, the bad guys got the win in this match.

In the main event, Ruff Crossing finally got his rematch title shot against the champion, Vic Capri. Last month Capri accepted Ruff’s challenge for him to give him a title shot and to do it alone. Vic kept his word and was flying solo. The match started with Vic and Ruff kicking each other in the face over and over and neither one of them was giving up or going down. The pace picked up from there and they had a wonderful see-saw matchup that really built up both characters really wanting that title. Neither one of them was giving up anytime soon and that is when Matty Starr came out and interfered. Vic was not happy about anyone coming to his aid and he was very frustrated when it happened. It proved fruitless however as Ruff overcame the odds and the fight kept going. In an exciting climax, and a testament to how strong of an opponent Capri was, it took two tombstones and then a super tombstone off the ropes to keep Vic down for a three count. Ruff won the title and celebrated with the fans while Matty Starr and Mr. Flores came out and attacked Vic. When they had him down, Matty said he had purchased Vic’s contract and he was now firing him. He planned on beating on Vic again with a chair but Ruff came to his aid. After Matty was chased off, Ruff told Vic that he once again respected him and the two hugged and left the ring. The crowd was delighted in not only one of their favorites winning the title, but that they witnessed such a solid wrestling show.

Hostile Intent was a great way to spend an evening on a holiday weekend and it set up at least one great match for Wrestlefest (August 9th). They have some huge stars coming in for the show too and it looks to be the biggest Pro Wrestling Blitz show of all time!