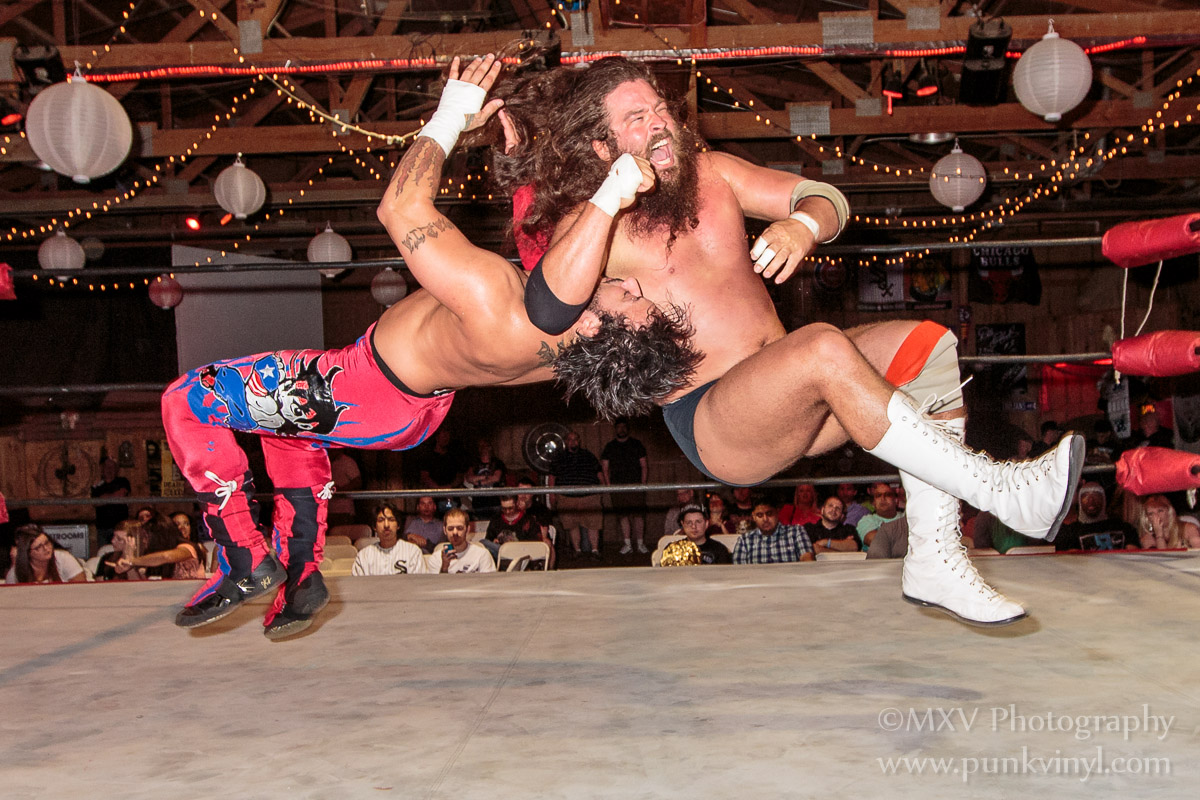 Friday the 13th may be bad luck for the superstitious but it was good luck for wrestling fans as Resistance Pro Wrestling presented, Deliverance at the Arabian Knights Barn in Willowbrook. They put on their usual action packed show featuring a lot of their top talent.

After a dark match featuring two newcomers, the show got started with a new feature, “Corgan’s Court”.  This was an interview segment and Billy brought out C-Red and Justin King to allow them to air their grievances with each other. They argued back and forth in a very civil manner for a while to build up some further excitement for the Marshe Rockett/Da Cobra match later in the evening. Billy was a level-headed and fair moderator for the segment.

Lonesome Jay Bradley bad his triumphant return to Resistance Pro in the first match and he faced Marvelous Matt Knicks. Bradley is about the size of two Matt Knicks and he made pretty short work of him. After shrugging off some of Matt’s earlier attempts at offense, Jay tossed him around like a rag doll and then nailed him with his boomstick lariat to finish the match. After the match, Jay took the mic and said that the boys in the back better get used to seeing more boomsticks in the near future as he plans on fighting his way to the RPro heavyweight title.

Remi (with Warden Myers and Christopher in his corner) took on Shawn Blaze in the second match. Remi started off giving a beat down on Blaze but he was able to mount a comeback with some flashy moves. When it looked like Blaze might get the best of Remi, the warden hit Blaze with his nightstick and Remi was disqualified. After the match Remi and Christopher continued to beat on Blaze before they left the ring.

Mickie Knuckles came to ringside to do some guest commentary and get a front row seat to see who she would be defending her women’s title against next as Crazy Mary Dobson and Lucy Mendez battled to become the number one contender. These two put on a fine match with a lot of back and forth. Crazy Mary was the high flier of the two and Lucy was a little more vicious and deliberate with her attacks. Crazy Mary got the win and after the match came over and shook Mickie’s hand as a show of respect. The match between these two should be an exciting one.

The tag titles were on the line when Superego (Jocephus and The Ego Robert Anthony) decided that they would defend the belts against a team of their choosing. They chose two of the ring crew, “The Sloberknockers” and figured they’d have an easy night. Before the match began, the Baron Brothers came to the ring and declared that it would be a hardcore match and that Mad Man Pondo would be the special referee. They also said they had a gift for the champs too and they pulled out a bag full of thumbtacks and poured them all over the ring mat! Ego and Jocephus made pretty short work of their opponents and took turns dumping them onto the tacks and literally rubbing their faces in them!

Ashton Vuitton returned after a month away to fight Scotty Young in a singles match. Ashton was in prime form and more arrogant than ever. This was a very good match between these two skilled workers and every time Ashton had the upper hand he became more full of himself. In one spot, Ashton was choking Scotty in the ropes and he held him there while he took his phone and took a selfie. Ashton got the win with a Northern Lights Suplex and rubbed it in Scotty’s face after the match and called him a loser.

Jesse’s Girls (accompanied by Jesse Corgan and Miss Prig) made somewhat short work of Angel Dust and Samantha Heights. Angel and Samantha were outsized and outnumbered as distractions (both intentional and accidental) aided Jesse’s Girls in their victory. Now if Jesse could just have his clients win two more matches he will get to stay in Resistance Pro.

Jake O’Neill and Acid Jaz did battle in the next match. These guys did a lot of technical wrestling that led to some exciting bigger moves and put together a really solid match. There was a lot of trading of holds and good back and forth action throughout the entire match. It was a very close match that ended with Jaz as the winner.

Da Cobra and Marshe Rockett tore the roof off the barn in a very emotional match that was not only the best match of the night but one of the best in RPro history. This match had everyone on the edge of their seats and the two combatants worked magic in that ring. They fought both inside and outside of the ring, traded blows, did big moves and had a lot of near falls before Cobra got the win. This likely will not be the end of the feud between these two and the real winner here is the fans as this match was worth more than the price of admission alone!

Mr. 450 finally got his wish of challenging Jocephus for the RPro heavyweight title. These two had a solid match and although he was outsized, 450 took the fight to the big monster and was able to gain control for parts of the match with his speed and ehigh-flying moves.  Eve came to the ring to interfere and was accidentally knocked down by Jocephus who then picked her up and used her as a weapon by body slamming her onto 450. This gave Jocephus the opening he needed to finish 450 off and retain his title.

Deliverance really turned up the heat for this summer and it set up at least one match for next month’s show (Mob Rules, July 25). Those who missed out on this show should be ashamed of themselves!