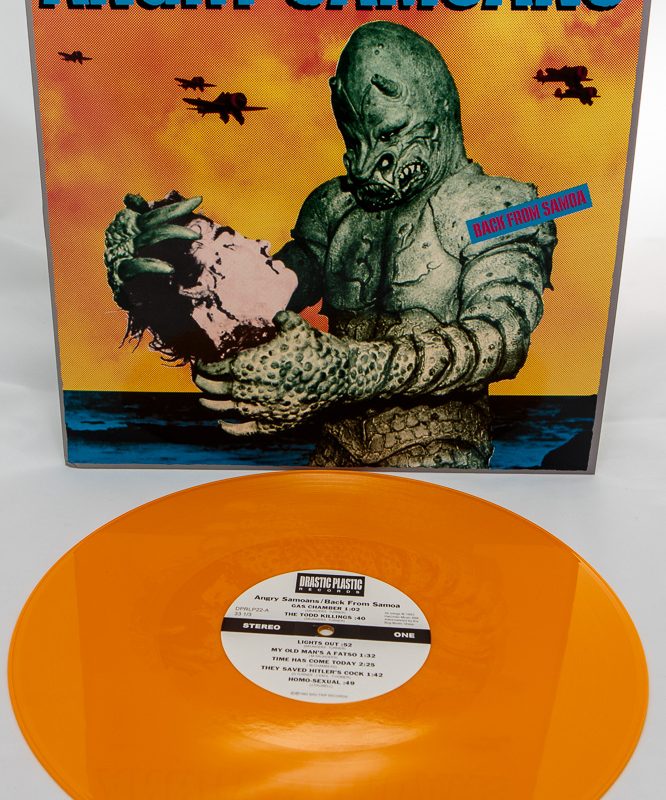 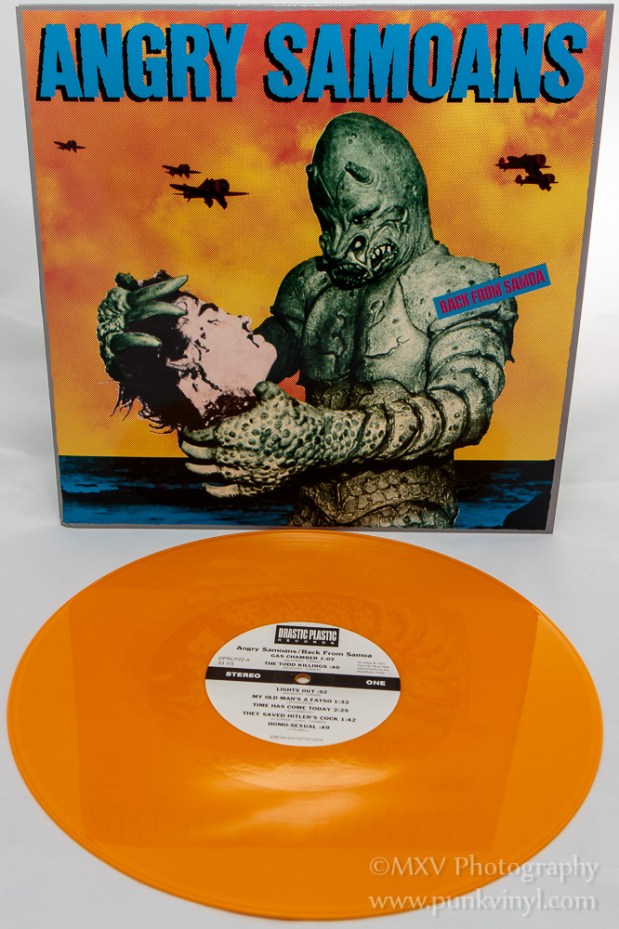 After hearing the Angry Samoans for the first time on my high school’s radio station I immediately added them to my list of bands whose records I needed to find and buy. I had a much easier time finding the band’s first full-length, Back From Samoa as it was their most recent release at the time (this was released in 1982) and they must have made a lot more of them. My punk rock friends during my high school years didn’t have much trouble finding one either as many of them owned it and it helped that the record was reissued a couple of times in a short amount of time before going out of print for a very long time.  In many ways, due to it being more readily available, it became the definitive Angry Samoans record for a lot of people in my punk rock circle.

The band didn’t stray from the formula that made their début 12″ EP so great, they simply stuck with it and made a full-length of great punk rock tunes. The band had humor, sarcasm, wit, and plenty of attitude to go around and when you couple that with fast punk/hardcore music you have something really good. While one could argue that after this the band wasn’t quite as good but there’s no denying that Inside My Brain and Back From Samoa are two slabs of essential early hardcore punk.

While this album enjoyed being in print longer, and on more labels than its predecessor, it still suffered the same fate of being out of print for the last 15 years. The only way to hear this record for most people was on some poorly mastered CD’s and punk rock of this era should be listened to on its intended, original format of vinyl. The problem was if you wanted to do that then you’d have to shell out about four times what the LP originally cost in order to own it but that has now changed.

Drastic Plastic Records went the extra mile by not only reissuing Inside My Brain but they also Back From Samoa and they released them both at the same time. This allows everyone who doesn’t already own this, or those looking for a nice upgrade and a new variation to own both of them for less than buying one original would cost you on the secondary market, and the packaging is better too!

The record comes in a full color, glossy jacket that recreates the original artwork with only minor differences. The original pressing’s cover wasn’t glossy so this was a nice upgrade. The record comes inside one of those high quality Mobile Fidelity style poly anti-static sleeves which is a really nice touch that minimizes any scuffing to the record when you take it in and out of the sleeve. The vinyl itself has two variations: either 200 gram black vinyl, or my preference, high quality (about 140gm) orange-colored vinyl. The colored vinyl really compliments the cover art and just looks so much cooler than the black. Like all the Drastic Plastic reissues these days, this was mastered by the folks at Masterdisk and they happen to be some of the best in the business as evidenced by just how good this record sounds. I played it back to back against both the original Bad Trip pressing as well as the 1982 German pressing on Aggressive Rock and this new reissue wins by a slight margin in sound quality as it is a bit more balanced and just sounds more full, especially in the drums and vocals. I also played it back to back against the 1998 German reissue and this blew that one away. This version will forever be my go-to copy when I want to listen to this record, which over 30 years after its initial release is more often than you’d think as it has held up well over the years.

Much like the first Angry Samoans reissue I wrote about last week, this is every bit a mandatory buy as that one as the two records compliment each other perfectly as it was the Angry Samoans at their prime. Drastic Plastic went above and beyond the call of duty with the amazing quality in both the sound and packaging of these reissues and they deserve a medal for the amazing service they are doing the world of punk rock and record collecting.