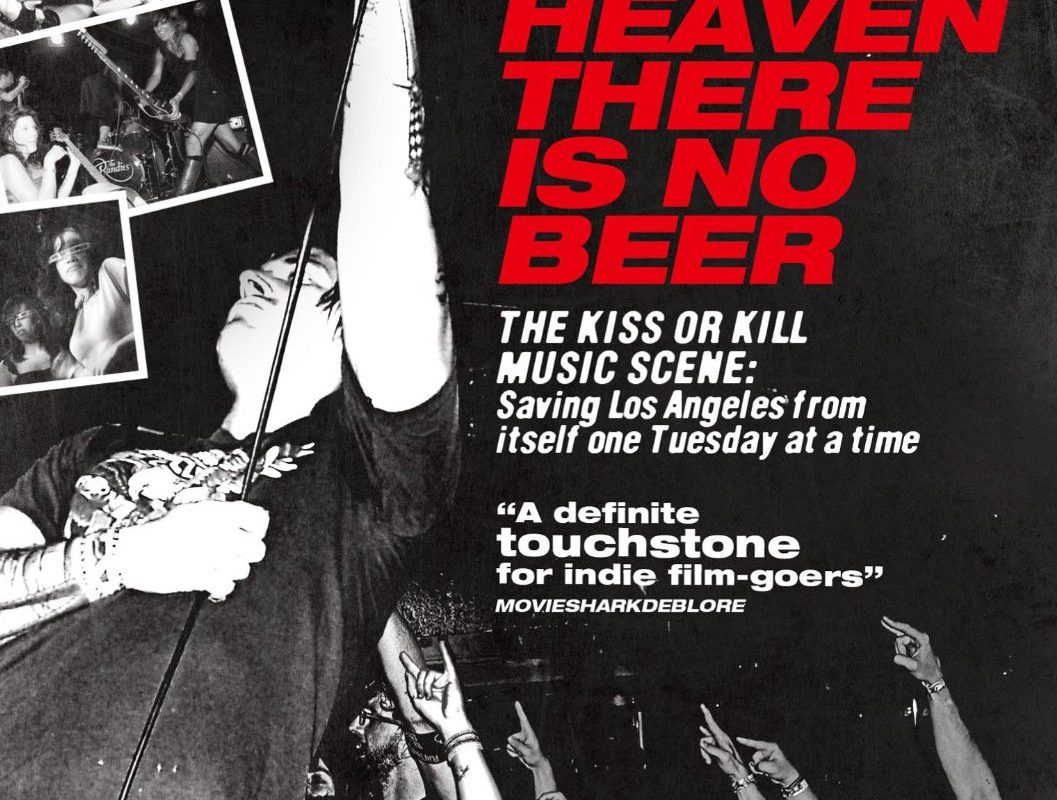 In Heaven There is No Beer DVD

In Heaven There Is No Beer
A documentary on the Kiss or Kill scene in Los Angeles, CA that was a unique and special experience for all those involved and a fascinating story for those who weren’t.
Rating:

In Heaven There is No Beer DVD
MVD Visual

In 2005 I saw this band called Bang Sugar Bang open up for The Adicts and I thought they were the most entertaining of all the opening acts at that show. A few weeks later I received a promo of their most recent album at the time (their second, Thwak Thwak Go Crazy!!) and found it to be equally enjoyable. I thought it would be cool to see them play again but I don’t know if I had just lost track of them or they never returned to Chicago but I never got the chance. From my vantage point they just kind of silently vanished and it turns out that two years later they released another album that I was unaware of. What I was also unaware of was just how important that band was for a span of five years when they were the main band behind the Kiss or Kill scene in Los Angeles which in certain circles was a really big deal at the time.

What this you say? You never heard of the Kiss or Kill scene? Don’t feel bad, I didn’t either and unless you were from Los Angeles you likely wouldn’t have. Kiss or Kill was a club that housed a lot of the local bands, all of whom became friends and they built an entire music scene around it. This was a weekly event that started in one club and moved into three more over the span of the five years it was around. The bands they booked were good, the people who attended the shows were friendly and enthusiastic, the beer was cheap and the combination made for not just a good vibe but it made for an unforgettable music scene. A place and time that often comes along once in a lifetime and means the world to those involved and can never be duplicated. Having experienced similar things locally I can say first hand that when something special like this happens in the music world it is something that sticks with you forever no matter how long ago it was. Most of the time these things come and go with little documentation and is only left to memories that fade over time and perhaps some old photographs. In the case of the Kiss or Kill scene, it meant enough to a few people that they made a movie about it so they could tell the world their story.

In Heaven There is No Beer (a title based on a Bang Sugar Bang song) is a documentary about the Kiss or Kill scene. Kiss or Kill started in a small nightclub outside the Los Angeles area and soon grew into this closely knit scene where both the audience and the participating bands became one big family. It was every bit the unified punk rock scene that you read about or dream about and it remained so for five years which is an incredible amount of time considering the time frame this occurred and the fact that it was happening in the music industry capital of the world. How they managed to go so long before labels swooped down and picked at the bands which in turn changed the dynamics that ultimately led to Kiss or Kill’s demise is a mystery but they somehow endured even after having to relocate the club several times over the years. It seemed that every relocation made the scene better and bigger until the very last move where they ended up on the Sunset Strip, the very place they rebelled against in the first place and that’s when it started dying out.

The film is told through interviews with just about everyone involved in that scene, whether it was band members, promoters, fans, press, or record label people. They really left no stone unturned when it came to getting people who were at all involved in Kiss or Kill to participate. The one  that resonated through every single person was just how much Kiss or Kill meant to them. This really was the highlight and most fun time of many of these people’s lives and as just an outsider with a passion for music, I found the story to be riveting. The stories are augmented with plenty of live footage of the bands playing Kiss or Kill over the years which was really a nice touch for those of us who weren’t there.

The film is 90 minutes long and was shot full frame. The quality of the live footage varies from great to decent but all the interview segments look and sound excellent. The time flew by while watching this and I was so interested in the story being told I didn’t once pause or take any breaks during it. When it was over I found myself wishing it had been even longer. The disc contains some bonus material in the form of deleted interview scenes that were as interesting as those included in the film, and four full live performances by some of the bands featured in the film. If you are a music fan, a punk rock fan, or just like to hear a good story of something special that happened once then In Heaven There is No Beer is definitely worth checking out.