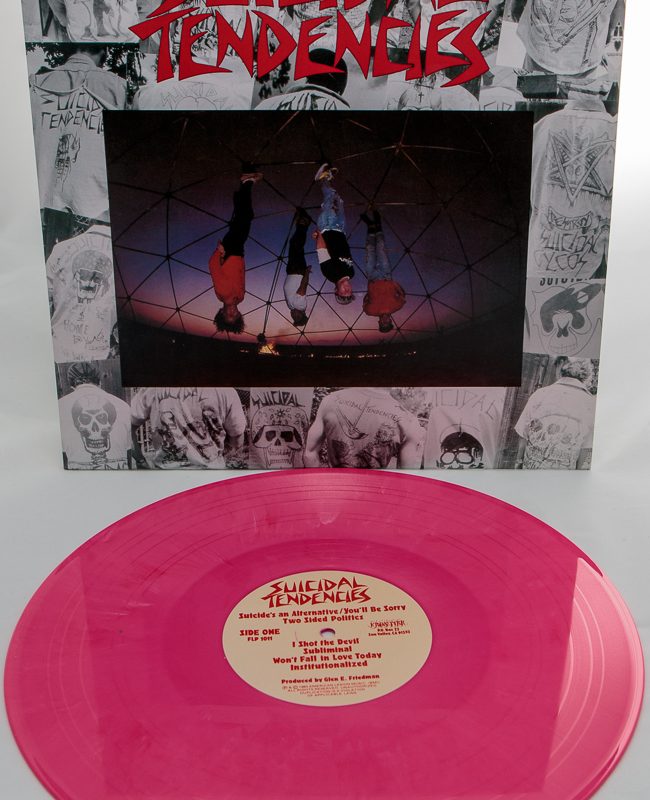 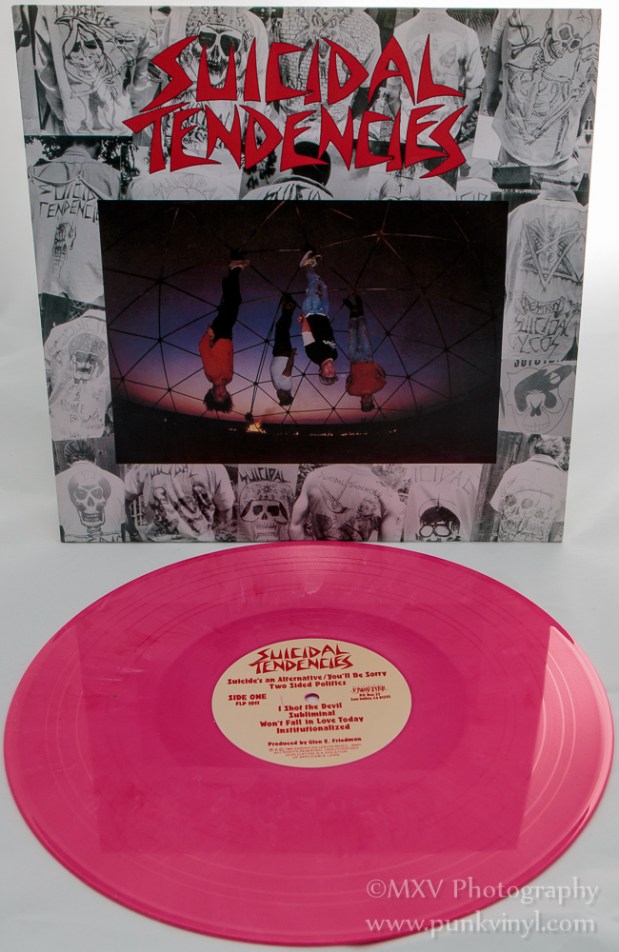 The last pressing of this iconic punk album was on baby blue vinyl which looked like it would be perfect to decorate a baby’s bedroom if you were an expecting parent and knew you were getting a boy, but what about those expecting a girl? Shouldn’t they get a girls color too? I mean who wouldn’t want to deck out their newborn’s bedroom with a punch of classic colorful punk rock albums? You’d be damn sure that’s what I’d be doing if I was making babies!

Now your prayers have been answered as the latest flavor of this masterpiece now comes on hot pink vinyl! What we have here, of course, is the first Suicidal Tendencies in its latest summer fashion, hot pink. I am running out of ways to explain to the world just how great this album is, how it is a punk rock masterpiece from back when things were new, exciting, different, and even dangerous. Do you people have any idea how often I got picked on for liking this band and all the other “punker bullshit” I grew up with? These days everyone and his brother will recite the lyrics from “Institutionalized” but back when this came out things were different and I played that song, and the rest of this album, incessantly when I was skateboarding while all the other kids played football and went to Def Leppard shows. This Suicidal Tendencies album helped shape my life and was part of a wonderful and exciting world where I felt like I belonged.

Suicidal Tendencies was from the Venice area and on a recent trip I went to Venice Beach and while walking around the area I wondered what it was like back when this band was writing these songs and hanging out there. I’m sure it was a lot different from what it is currently but they did have a really cool skate park area where I’d have spent all my time had I been around at that time, all while listening to records like this which is pretty much what I did in the Midwest except that we get cheated out of six month of skateboarding season due to the shitty affliction known as winter.

With only two exceptions, since its birth this album has always been available on Frontier Records, the original issuing label. It has even spent most of its life available on vinyl which is a rare thing and that vinyl was always black. Now in the 21st century it has enjoyed quite a few colored vinyl pressings, all of which have been limited in nature. This most recent color, hot pink, is available for a short time and will likely be gone by the time the seasons change once again. It comes with a glossy lyric sheet which was something that was lacking starting with the second black vinyl pressing until these nice colored vinyl editions started happening which is when they reinstated them. The music on this record is of course the same incredible and mind-blowing material that made this a classic in the first place and I will always have room for plenty more copies on future colors as you can never have too much Suicidal Tendencies in your life… provided you stick to this which was their only truly great record. Get yourself one now from Frontier Records for  a fraction of what newer labels will charge you for a 12″EP and it even includes shipping! Oh and if you do decorate the kid’s room with one, be sure and send over a photo and I’ll post it here.