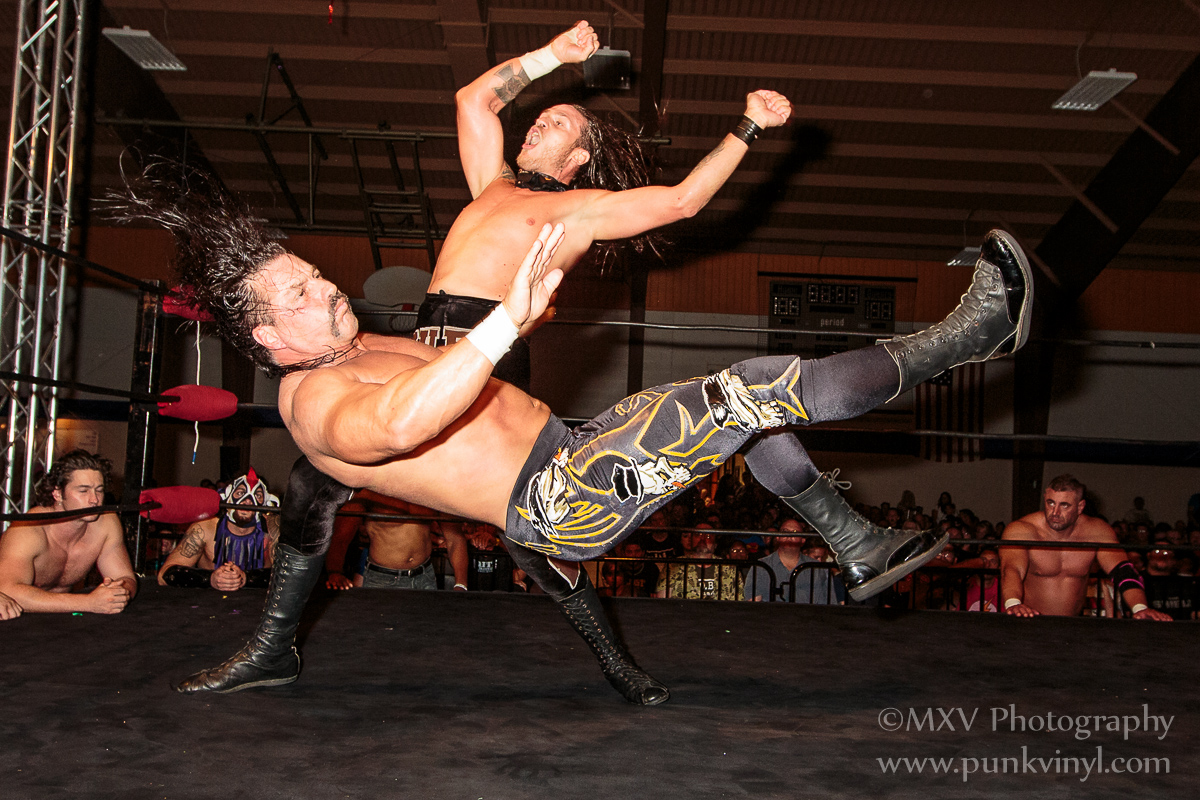 Pro Wrestling Blitz returned after a short hiatus with not only their biggest show of the year but what was probably the biggest indie wrestling show in the midwest with Wrestlefest 5! They packed a couple of thousand fans into the Joliet Park District and the place was full from front to back on all sides. The company not only had their usual array of great talent but they spared no expense to bring in a ton of big name stars and fans were able to get photos and autographs at the meet and greet before the show with Kurt Angle, Kevin Nash, Booker T, Scott Steiner, X-Pac, Sabu, Rhyno, Abyss, Too Cool, Al Snow, and Bushwacker Luke. Fans lined up hours before the doors opened for this and the place was full of excitement from start until finish. Even a faulty air conditioning system and the subsequent sauna the arena was couldn’t spoil the fans’ excitement!

First up was a ladder match for the No Limits title featuring Marshe Rockett and Grin. These two had a match for this title at a previous show where both men ended up being pinned simultaneously so the title was held up until this match where the two would compete to determine a true winner. These two men put on an amazing match full of exciting spots, close calls at victory, interference by the Ringmaster and some death-defying falls. The crowd roar was deafening during the entire match and it ended up stealing the show! This was easily the match of the night and there wasn’t a bad match on the card.

Jimmy Rockwell tried unsuccessfully to relieve himself of the Hot Potato Title by facing former WWE/WCW superstar, X-Pac. This was a short but fun match which Jimmy took an early and shifty lead before X-Pac made a flashy comeback full of his staple moves that popped the crowd big time. A well-timed X-Factor got him the win and a huge round of applause. After the humiliated Rockwell left the ring with his Hot Potato burden, X-Pac gave a heartfelt thanks to the crowd.

Melanie Cruise came to the ring to talk to the fans and was immediately interrupted by Hudson Envy who claimed she was a bigger star and had done more than Melanie. They were about to come to blows when commissioner Broox broke it up, temporarily, while he decided to make a match between the two. If that wasn’t enough, he brought out a special guest referee in the form of former WWE superstar, Victoria! She looked amazing and she kept the action fair. Hudson put up some offense at the start of the match but it didn’t last long and Melanie dominated most of the rest of the match and got a pretty easy victory. After the match, Hudson shoved Victoria out of frustration and Victoria knocked her on her ass and then hit her patented backflip splash on her. Melanie and Victoria celebrated in the ring afterwords for a few minutes and posed for the fans.

Brian Nelson and Nick Cutler came out next and challenged Scotty 2 Hotty to a dance off. Scotty then said he had a partner and his long-time partner in Too Cool, Brian Christopher. Nelson and Cutler danced first and looked ridiculous doing so which was completely hilarious. When it came time for Too Cool to dance, Cutler and Nelson attacked them from behind and that led to an actual wrestling match. The action was pretty fast and furious and Too Cool got the win and then had their chance to dance around the ring and make the audience happy. The fans went nuts for the worm from Scotty 2 Hotty and Brian did his big leg drop from the top rope as well.

Kurt Angle came out and gave a little talk to the crowd before going over to the announcer table to do guest commentary on the next match between Matty Starr and Ryan Slade. These two have history as two former members of The Elite before they had a falling out and Ryan became a babyface. The match was one of the more traditional wrestling matches of the night and had a slower pace with more mat action. These two had a lot of good back and forth action but the sleazy cheating tactics of Matty couldn’t even stop Ryan Slade from victory. A little surprised help from a masked man who turned out to be Diamond Dallas Page didn’t hurt Ryan either!

In a three-way hardcore match, Hardcore Craig, Rhyno, and Sabu beat the living hell out of each other with everything they could get their hands on. These guys used plenty of tables and chairs to pummel one another and they all kept coming back for more. The action even spilled out into the audience briefly as well. Just when you thought someone couldn’t take another beating, they would get back up for more or one of the other men would take over. When the carnage finally stopped, Hardcore Craig’s hand was raised in victory in a major win against these two legends. The crowd loved it as Craig is one of the Blitz crowd’s favorite wrestlers.

In a “grudge match” Judas fought Max Sinister. It was pretty unclear what the grudge match portion entailed but it was a rather short match and the outsized Judas outsmarted Sinister and used his speed to his advantage to get the win. There would be no celebration however as The 3 Rings attacked Judas after the match and then Sinister choke slammed Magdalena and threw her into a road case and kidnapped her.

In a huge battle royal, a plethora of wrestlers competed to win the “golden ticket” which would get the holder of it a title shot. The action was so chaotic it was really hard to keep track of what was going on until the numbers thinned out considerably. In the end it was down to the giant, Reese, and Melanie Cruise. Despite her size Melanie was at a big disadvantage but she prevailed when Reese foolishly charged at her and Melanie ducked down while pulling down the top rope and Reese went spilling out to the floor. Commissioner Broox came out after the match and presented Melanie with the golden ticket. It was not made of actual gold.

Two monsters did battle in the next match when Machine of The 3 Rings faced the monster, Abyss! These two were pretty close in size and wrestling style and they had a very solid match full of punches, kicks, tackles and slams. As much as Machine put up a strong battle, Abyss was able to take him down for the three count after the Black Hole Slam. Machine was pissed off that he lost but he put up one hell of a fight and held his own against the monster.

Chris Logan (with Billy Whack in his corner) put the LWF title on the line against Pauly Thomaselli. Pauly has been on fire lately and he had his sights sent on this title with such a cherished lineage. He was also smart enough to know that unless he had someone in his corner he’d be at a disadvantage so he called out Booker T to watch his back! Booker did a great job of it too and that led to Pauly finally getting a win despite every cheating effort of Whack to try to aid Logan. After the match Logan shook Pauly’s hand as a sign of respect. Billy Whack was livid that the most important thing in the world to him was now in the hands of Pauly.

In the main event, Al Snow and Ruff Crossing had a title match for the Blitz title and it was a lumberjack. Al won the title last month at the special Six Flags show and Ruff Crossing wanted the title back in the worst way. These two fought like hell and knocked each other senseless. During a mishap where Al was actually trying to cheat to win by using Head as a weapon, he knocked out the referee instead of Ruff and this led to all the lumberjacks interfering in the match. One by one a lumberjack would come in and hit their finisher on whoever was in the ring before being taken out by the next lumberjack who entered the ring. This was really a lot of fun and the audience roared for each one of them. Al and Ruff also were on the receiving end of a couple of moves before the chaos ended and the match continued. After some more distractions and interference, Ruff Crossing found a spot to take advantage and leveled Al with a huge clothesline which got him the win and the title back. It was a fun and exciting match and ended with a really good “feel-good” moment when Ruff was handed the belt and became champion once again.

Wrestlefest was an incredible show. It drew a record sized crowd and really felt like a very special event, almost a wrestling holiday. It will be hard to top a show of this magnitude at next year’s Wrestlefest but if anyone is up to the task it is certainly Pro Wrestling Blitz. An amazing event from start to finish!