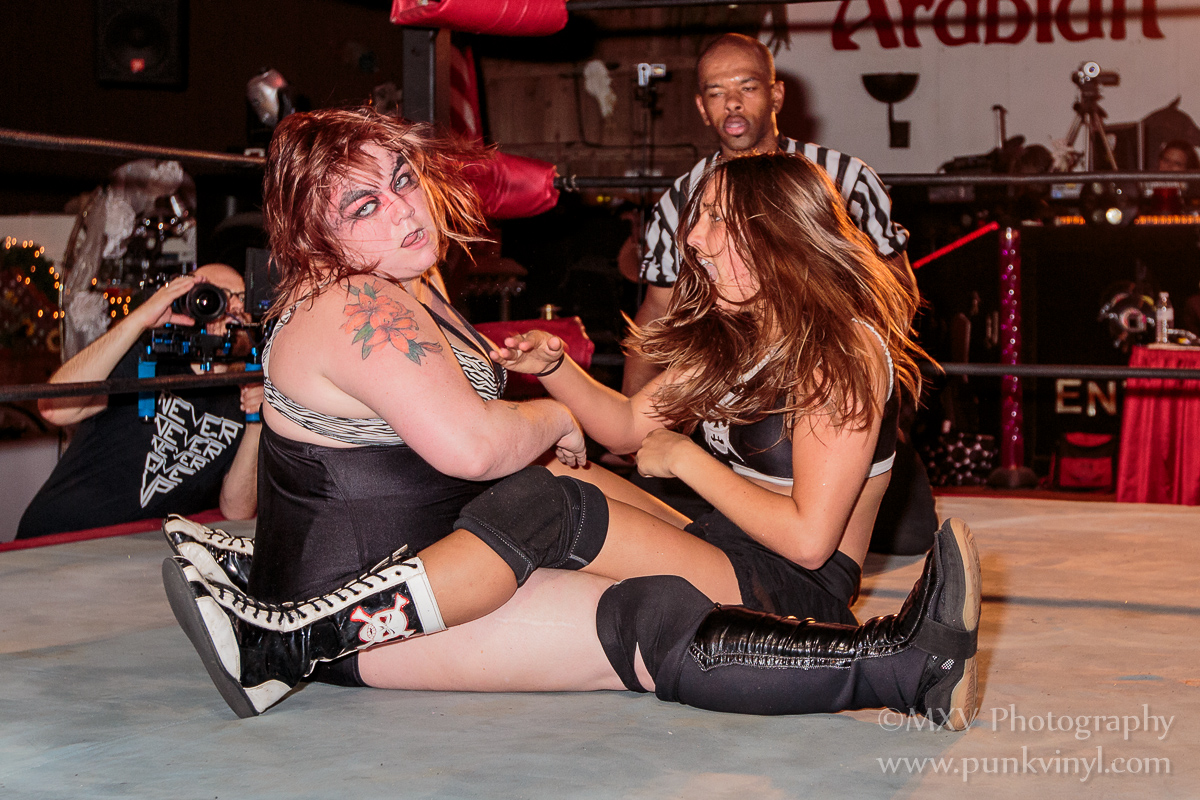 Sunday night was a big night for Resistance Pro Wrestling as it was not only the night of their latest event, but said event was the first TV taping for their unscripted reality show for the AMC network. The company put its best foot forward at the Arabian Knights Barn which was not only hot on wrestling action, but as hot as a sauna. That didn’t stop a crowd of wrestling fans from filling up the place and making it hotter though.

At the start of the show Billy Corgan and The Ego Robert Anthony had a bit of a heated debate when Billy was discussing the brutal attack on Jacques Baron last month by Jocephus. After some witty banter back and forth it led to the first match which Ego faced Scotty Young. This was a fairly short match and Scotty brought the fight to Ego but Ego made pretty short work of Mr. Young. A taco pizza topped with a death valley driver got Ego the win.

In a fatal four-way match to determine the number one contender for the women’s title, D’Arcy Dixon took on Angel Dust, Lucy Mendez, and Paloma Starr. D’Arcy sat out on a lot of the match and wisely let the other three ladies beat each other up while she would come in and pick her openings to attack. The action was a little hard to follow due to needing to look multiple places to keep up with it but a four-way jawbreaker spot was the real highlight of the match. D’Arcy Dixon won the match, which probably didn’t shock many people, and she was full of herself after the match, once again showing her newfound arrogance.

Shawn Blaze has wanted to get his hands on Warden Myers for months now as he and the purple block have been the bane of his existence lately. This month he had a match with Christopher (with the Warden and Remi in his corner) and if Shawn won, he would get three minutes alone in the ring with the warden to dish out some revenge. Shawn started out with an early offense and was a man possessed. When Christopher started getting into trouble it didn’t take long for the Warden and Remi to start interfering. Shawn held them off for a bit and even got a kick in on the Warden but that gave Christopher an opening to turn things around and beat Shawn.

Two men who have been on a tear lately and involved in some of the best matches in RPro history, Jake O’Neill and Cobra, had a best of three match. This featured a lot of great technical action along with some bigger moves. The pacing of this match was excellent and it ended up being the best wrestling match of the evening. Jake won the first fall by count out after he super kicked Cobra on the apron. Cobra won the next two after some great action that kept fans on the edge of their seats not knowing which way the match would go. With so many recent wins under his belt, Cobra has to be nearing the top of the list of wrestlers deserving of a title shot and despite losing the match, Jake still came out of this match looking as strong as ever and should move on to plenty of big things as well.

Colonel Jesse Corgan had to wrestle in his first match against Chris Castro. This was the last match Jesse or his stable had to win in order for Jesse to keep his job in RPro. Jesse wanted nothing to do with getting in the ring and refused to get in the ring. After a couple of minutes of wasting time, Billy Corgan announced that the match would now be a no disqualification, falls count anywhere match. This made Jesse cower in fear  and try to walk out of the arena. Castro gave chase to him but was cut off by Matt Knicks and it was only then that Jesse was feeling full of himself and got into the ring. Jesse was so sure Knicks had things under control that he started telling Castro to come face him in the ring now. Castro came in and Jesse was once again terrified and laid down on the mat and told Castro that he gives up and to just pin him. Castro seemed unsure as to whether or not this was a setup but went for it anyway. When Castro made the cover, Knicks came in and laid into him with a chair. Jesse went for the pin but Castro kicked out. After super kicking Knicks to keep him away again, Castro finally got his hands on Jesse and choked him out. The fans loved every minute of Jesse getting his comeuppance.

As if the four-way ladies match wasn’t hard enough to follow all the action in, imagine if it was four tag teams! That’s what we had in the next bout that had four teams duke it out to determine the number one contender to the tag titles. Body Magic (Brady Pierce and Eric St. Vaughn), The Slobberknockers, Da Soul Touchaz and Mad Man Pondo with a mystery partner were the combatants. When Pondo came out he announced that his partner would be Jay Bradley! The action in this match was fast and furious and it never let up for even a minute. The Slobberknockers were eliminated rather quickly after a pair of boomsticks by Jay Bradley. Eric St. Vaughn actually got in the ring for a chance, albeit briefly, and started choking Acid Jaz with his jump rope and then tried and failed to use his shake weight as a weapon which led to Body Magic’s elimination. Da Soul Touchaz and Jay/Pondo went at it for a awhile after that with some good back and forth action but once again Jay’s boomstick proved dominant and leveled Jaz to get the win and now Jay Bradley and Mad Man Pondo are the new number one contenders to the tag belts. If they can continue to get along these two big men could go on quite a successful run.

Crazy Mary Dobson had a crack at winning the women’s title when she faced the returning champion, Mickie Knuckles. Mary was all smiles, even when taking multiple slaps to the face! It seems Mary enjoyed the beating that Mickie was putting on her which dumbfounded and frustrated Mickie. Mary really had a chance to shine in this match and show off this new side of her that lives up to her name. Mickie and Mary went at it hard, slapping and kicking and slamming each other inside and outside of the ring. Mary nailed Mickie with some big moves which looked like would keep her down but Mickie is as tough as they come and managed to kick out after every one, eventually finding an opening to get herself a win. After the match, D’Arcy Dixon came out of nowhere and attack Mickie with the women’s belt, using it to beat relentlessly on Mickie’s recently broken leg and then she started choking her out with the belt, all while screaming at her. It was really intense. No one has ever seen this side of D’Arcy Dixon before and it was so fulled of emotion and intensity that it was a home run. This match was good for not only Mickie and Mary who both came out of this match looking strong, but also was a turning point for D’Arcy with the post-match beat down which really adds to her character and set up for what should be an even better feud with Mickie than their last one.

Suge D had an opportunity to fulfill his dream of becoming a world champion when he had a shot at the RPro title. The unfortunate thing for Suge is that title is held by the big wooly mammoth known as Jocephus. Suge actually got a bit of the upper hand at the beginning of the match, using speed to get in some offense which then led to him going for some comedy when he tied up Jocephus’ legs and then stood on him like a surfboard. This was the beginning of Suge’s undoing as it just pissed off Jocephus and he retaliated by turning the tables on Suge and starting to beat him down. Suge had a lot of heart and never quit, and he found a soft spot later in the match on Jocephus and started going to work on it in a comeback but between interference by Eve and Ego, and the sheer strength of Jocephus, Suge eventually succumbed to the big man and went down for the three count. After the match Jocephus brought Eve and Ego into the ring and asked them to bow. He then took a Singapore cane and hit Eve so hard with it that she was in tears. It was shocking to say the least. He then told Ego it was his turn. Ego seemed like he was going to just walk out of there at the thought of this crazy request but then he knelt back down and took a couple of even harder shots. Ego seemed to almost enjoy it! After this bizarre display, the three “hugged it out” but Eve’s tears were still running down her cheek as the three exited the ring.

For their first AMC taping, Resistance Pro put together one heck of a strong showing and everyone worked their ass off in the stifling heat to put their best foot forward. Things will only get bigger and better from here and it is going to be fun to go along for such an entertaining ride.

Check out additional photos from The Real Thing here!