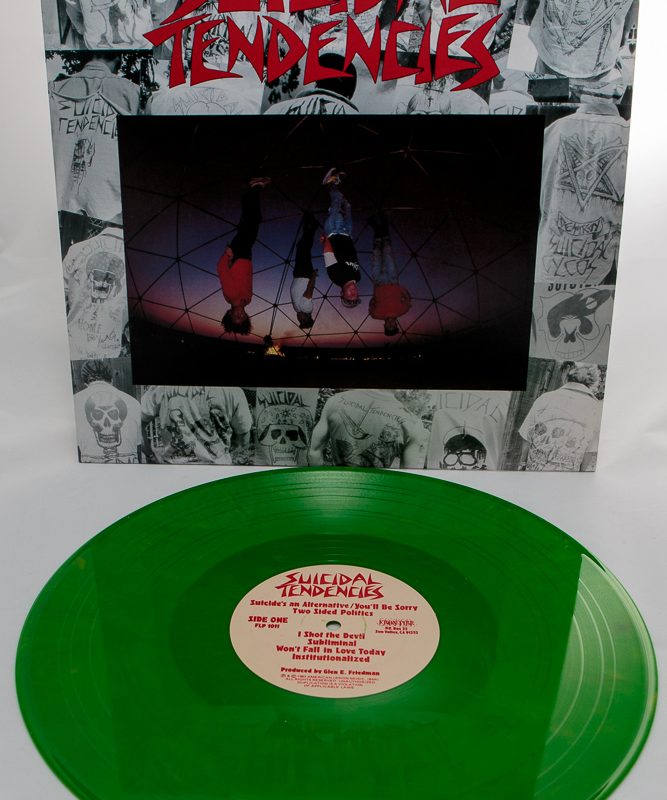 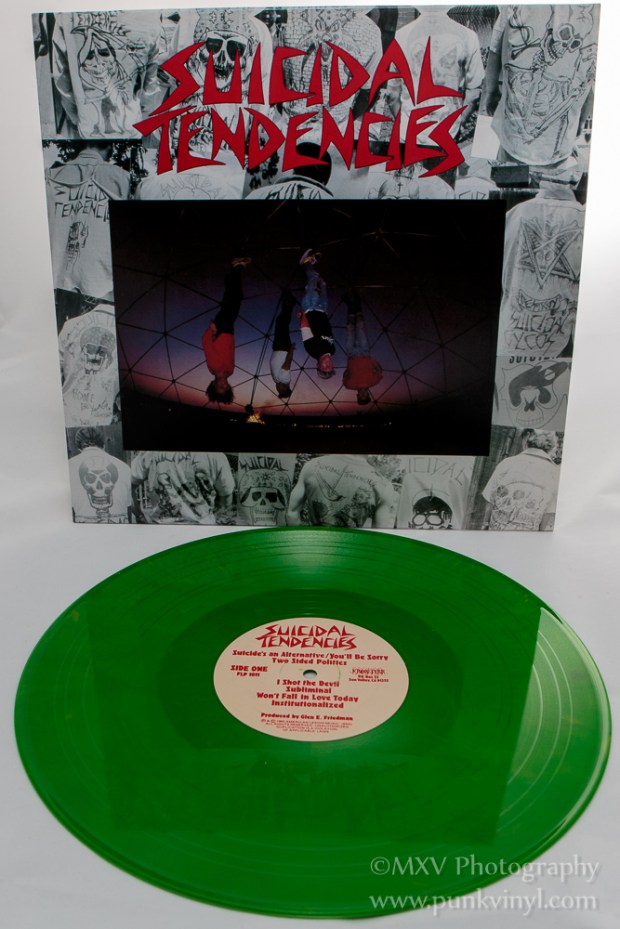 In looking at this latest color of the first Suicidal Tendencies album, touted as “guacamole” colored vinyl, I thought it was appropriate that the color was named after a food product because one of the most memorable lyrics from any of the songs on this record also makes reference to a food product: Pepsi. In the song, “Institutionalized”, Mike speaks about a confrontation he had with his mom where all he wanted was for her to get him a Pepsi because he was apparently too lazy to get up and go to the kitchen to get one himself. I can relate to that as I was once a rebellious and lazy teenager and probably did the same thing, though it never led to my mom thinking I was crazy or on drugs.

I have played this album a lot over the course of the three-plus decades I’ve owned this record. I still play it regularly, and I play every new colored vinyl copy that gets sent to me too. I will never tire of this album and neither has the world because it is easily one of the biggest selling punk albums of all time. Generations of punk rock kids who weren’t even born when this album came out buy this thing every year proving that great music is timeless. Recent spins of this album got me to thinking about the subject matter of the band’s most popular song, “Institutionalized” and I was wondering why Mike’s mom thought he was on drugs just because he wanted her to get him a can of soda. I know I did the same thing when I was a kid, and my name is also Mike, but my mom never flipped out like that. It was then that I had an epiphany about the origins of the rift between Mike and his parents and I believe it comes down to one simple thing: Pepsi.

That’s right, it was a soft-drink that was the impetus behind all the problems that Mr. and Mrs. Muir had with their son. It wasn’t that he looked mean and dressed weird (back in then it wasn’t socially acceptable to look like a punk rocker) and it wasn’t that he was too lazy to even get up and get his own can of soda out of the fridge, oh no, it was his choice of cola that really concerned his parents because who in their right mind would choose Pepsi over Coca-Cola?! Seriously, Pepsi is the inferior cola and everyone with an IQ over 11 knows this. Pepsi isn’t even better than RC (Royal Crown Cola), a soda that is a distant third in the cola wars but still is light years better tasting than Pepsi. Because of this poor choice, Mike’s parents assumed that he must not only be on drugs, but that he is crazy and they wanted to send him somewhere where he could get the help that he needed, and boy did he need help!

I’m not sure if Mike’s time being institutionalized ever helped him get over his penchant for inferior beverages. He probably traded his love of soft drinks for that of either beer or energy drinks by now. What I do know is that the one truly great record his band made is now available on another cool looking color of vinyl and I think it really looks sharp. In taking inventory the other night I realized I have more copies of this album (all different color/pressing variations) than any other record in The Punk Vault, and that is really saying something! Getting another copy of this album always gives me a good excuse to listen to it yet again, something I always enjoy as listening to it makes memories of my punk rock youth come flooding back and those were some fun times.

Frontier Records put out some of the best records in punk rock history and this is one of them. They are a wonderful label well worth supporting and everyone should have a few different flavors of this album in their record collection. If you would like a fancy new color or if you are one of the foolish people still out there who don’t own a single copy of this record, you should head over to the Frontier Records website and pick one of these guacamole non-flavored gems before it is too late.

In closing, I hope Mike did get the help he needed and now has better taste in soft drinks.