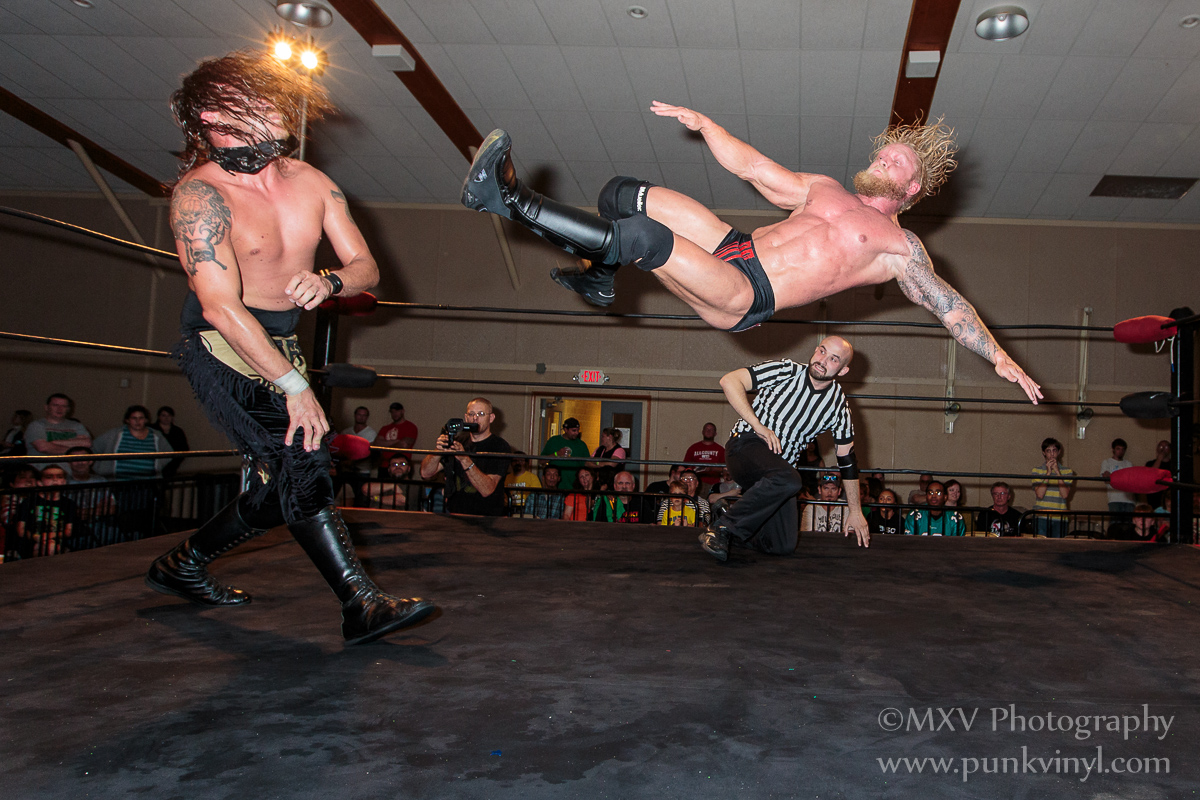 After putting on the midwest’s largest independent wrestling show last month, Pro Wrestling Blitz returned to their normal home of St. Joseph park for Fallout. This featured a few new faces as well as the returning regulars. The show also featured a guest appearance by former WCW superstar, Buff Bagwell. It was a lovely evening in Joliet for some wrestling and a good-sized crowd filled the place.

First up was a dark match but this just wasn’t any regular dark match, this match had a stipulation as the fans could decide if one of the combatants would get a contract to stay in Blitz after the match was over. Willmoa (a very large Samoan wrestler with cool face paint) took on the smaller, Brad Kevins. Willmoa (he needs to change that name) had control for most of the match due to his size and strength but near the end Brad Kevins made a little rally and even managed to roll Willmoa up for a pin. After the match, Commissioner Broox came out to the ring to get the crowd’s reaction. It was dead even so he declared it a tie. Mr. Flores was suspiciously out near the ring for most of the match watching and then escorted Willmoa backstage after the match.

Jester Yorrick (formerly Judas) faced Sinister of The 3 Rings in a casket match. Sinister was accompanied to the ring by The Ringmaster who didn’t hesitate to try to help his man whenever he could.  Judas was outsized by a good amount but he gave Sinister everything he had and nearly won the match when he had Sinister in the casket. When he tried to close the lid, The Ringmaster was holding on to it to prevent it from closing. Sinister made a quick recovery and choke slammed Jester on the ring apron and then rolled him into the casket and closed it, getting the win. After the match, Machine and some druids carried the casket away. What will become of Jester after this abduction? We have still not heard what became of Magdalena after she suffered a similar fate at Wrestlefest.

Mr. Flores came back to the ring along with the rest of The Elite (Matty Starr and Zach Thompson) and they were accompanied by Willmoa. Mr. Flores said that not only was Willmoa a new member of The Elite, but he’s been spending Matty Starr’s money wisely and picked up another member. Brubaker came to the ring as the newest member of The Elite and he challenged Ruff Crossing for a title match later that night. Zach Thompson must have been feeling neglected a little as he suddenly took the mic from Mr. Flores and said that he was going to challenge Vic Capri to a match where the loser has to retire from Blitz and that he was doing it for Matty Starr. The rest of The Elite just looked at Zach like he was crazy (which he is) but he insisted that is what he was going to do.

The next match was a triple threat match between Reese, Nick Cutler, and Ryan Slade. Reese is about as big as Slade and Cutler combined. It looked like Cutler and Slade might team up against Reese but it quickly turned into every man for himself, or more realistically every man by himself against Reese. Had Slade and Cutler formed some sort of alliance for the match they might have fared better but since they didn’t the big man was able to secure a win fairly easily.

Matty Starr challenged Pauly Thomaselli for the LWF title. Matty would have loved nothing more than to add some gold around his waist again and he tried every dirty trick in his book to win that title but Pauly was able to keep him at bay throughout the match and retain the title after hitting him with an impressive looking 450 splash.

Marshe Rockett faced Machine of The 3 Rings (with The Ringmaster in his corner) and this one was quite a brawl. Marshe is a very quick and agile and that agility helped him keep Machine on (and off) his toes. Machine is a powerhouse who will dismantle someone quickly once he gets them down. This had a lot of good back and forth action and was an enjoyable match and it ended when Marshe found an opening to hit his M-80 finisher on Machine and get the win. Marshe didn’t have any time to celebrate however as Jay Bradley came running to the ring and laid Marshe out with a huge boomstick. This was Jay’s way of announcing that he was back in Blitz and ready for a fight. Marshe will definitely want to get him back soon, hopefully at the next show as these two have the potential for a great match.

In what ended up being the best match of the evening, The Shogun Chris Logan and Hardcore Craig brawled for a good 15 minutes and there wasn’t a dull moment in the match. Billy Whack came to the ring with Chris Logan and seemed to be more annoying than ever, to the point that Logan looked like he really didn’t want him around. Billy said that he was still mad that Logan lost the LWF title but winning this match would be a good start to trying to get his forgiveness. This seemed to piss Logan off further and he tried to take it out on Craig. Craig is as tough as they come and these two had complimentary styles and put together a really good fight. Lots of back and forth action, lots of blows, hard chops and kicks and big slams and neither was keeping the other man down long enough to get a count of three. Billy Whack tried to interfere and Chris Logan ended up knocking him off the ring apron. The distraction by Whack contributed to Logan losing to Craig in a very hard-fought battle. After the match the Masked Bonanzas (three of them) attacked Craig and Pauly came running out to his aid but he was getting attacked by them as well. Chris Logan helped both Craig and Pauly fight back and chase them out and when the dust settled the three shook hands and shared some beers in what looks like a new alliance.  Excellent work by both Craig and Logan.

Zach Thompson got his wish and faced Vic Capri in the “loser retires” match. What Zach probably wasn’t counting on was losing the match. Zach dealt out a lot of the offense in this match but Vic can take a lot of punishment and give it back in spades and that’s exactly what happened. When Vic got the win, The Elite came out and attacked him. Hardcore Craig and Pauly Thomaselli came to Vic’s aid and there was a big brawl that happened in and out of the ring. Vic climbed up onto the Bltz-tron and jumped off of it onto all of The Elite who were on the floor. That put a quick end to the mêlée and The Elite retreated with a bloody nosed Matty Starr in tow.

Grin put his No Limits title that he won last month on the line against former WCW superstar, Buff Bagwell. Bagwell looked pretty much the same as he did back when he was in WCW so he’s been aging amazingly well and staying in shape. Buff took the offense early but Grin kept up with him and was able to turn the tables on him quite a few times. When Buff was making a comeback it looked like he was going to nail Grin with his blockbuster finisher but Grin ducked it and used that opening to nail his finisher on Buff when he landed. Grin and The Ringmaster were quite pleased with themselves as Grin posed over Bagwell after the match. This was a solid match and it was good to see Bagwell still at it.

In the main event, Blitz Champion Ruff Crossing put his title on the line against the newest member of The Elite, Brubaker. Brubaker must live in a gym because that guy was ripped. Ruff was a good foot taller than him however. These two fought inside the ring and punched each other in the face a lot before the action spilled outside and started to really heat up. These guys seemed like they were going to beat each other to death and they increased the size of their moves. Brubaker had some nice looking kicks and was downright vicious when he had the upper hand but Ruff is probably the most resilient champion in Blitz history, hence him holding the tile three separate times in the past couple of years. Ruff took everything Brubaker had, including interference by The Elite but he was able to retain the title in a really entertaining brawl. This probably isn’t the end for Brubaker and Ruff and another match between these two in the future would be a welcomed one for sure. After the match The Elite came out and gave Ruff and anyone who came to his aid a beating before they left the ring, happy with the carnage they unleashed.

Fallout was a nice follow-up to Wrestlefest and it was great so see some new faces on the roster. It should be an exciting year moving forward and there’s likely more surprises to come.