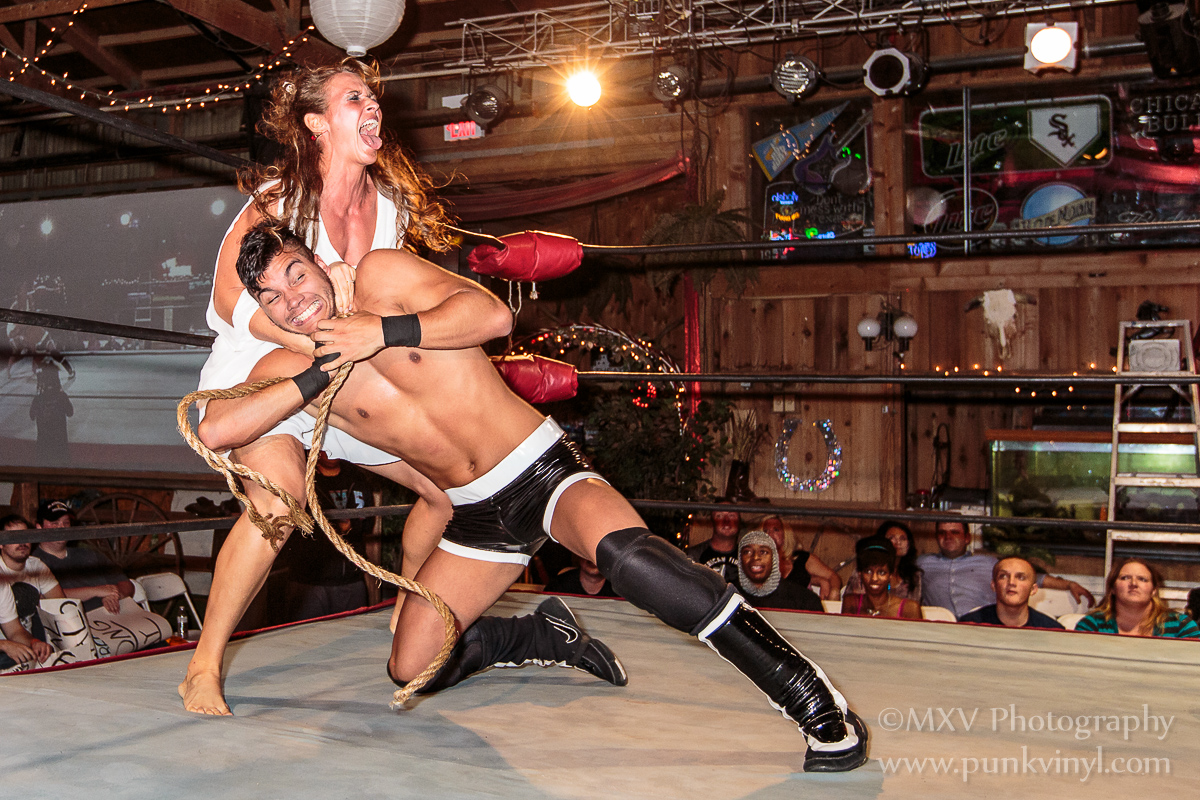 On Friday night, Resistance Pro returned to the Arabian Knights Barn in Willowbrook for Practice What You Preach. They have done so many shows at the Barn that they should rename it the RPro arena. It’s a nice place that is perfectly suited for an independent wrestling show.

The show started when Jacques Baron came out to address the tag title situation and he apologized for his unprofessional behavior at the last show when he punched The Ego Robert Anthony in head and busted him open, requiring stitches. This lead to other tag teams coming out to put their name in the mix for the now vacant titles which would up for grabs later in the show. After a lot of verbal sparring between everyone it looked like it was time for everyone to leave the ring and start the show, and that’s when Ego attacked Pondo.

Ego and Pondo had a hardcore match and after a few minutes of brawling which left Ego on the ground reeling, Pondo went to the back to get some weapons. Pondo didn’t make just one trip back there, he made numerous and brought out pretty much everything that wasn’t nailed down and started using most of it to systematically beat Ego unconsciousness. He never truly succeeded at Ego kept fighting back and giving equal punishment back to him. Weapons included golf clubs, a saw blade on a baseball bat, some metal store display rack, chairs, a staple gun and dollar bills, a sledgehammer and cinderblock and more! The fans lost their minds when these guys hit each other with stuff and especially when Pondo smashed the cinderblock on Ego’s balls with the sledgehammer. The finish saw Pondo superplex Ego off the top rope through a table which pretty much killed both men but Ego somehow landed with his arm draped over Pondo and the referee counted to three and awarded Ego the match. Security had to carry Ego to the back as he was unable to move on his own and they tried to help Pondo but the hardcore veteran refused and limped out on his own, far less worse for wear than his opponent.

Crazy Mary Dobson faced Angel Dust in the second match. Both of these ladies are known for some high-flying moves and exciting action and they did not disappoint. Crazy Mary was crazier than ever with her personality which is really entertaining and she was very vocal and unpredictable in that ring. Angel Dust did her best to keep up with Mary’s offense and got some impressive moves of her own in there but in the end Crazy Mary was able to win the match after dominating a good percentage of it. Her top rope stomp got the job done. Great work by both ladies and the match was entertaining from start to finish.

Shawn Blaze and Suge D teamed up for the first time to take on Remi and Christopher of the KOA penitentiary and were accompanied by Warden Myers. Suge and Blaze were very animated and had really good chemistry together and they made for an exciting team. This was easily Shawn Blaze’s best showing in RPro and teaming with Suge really seemed to break him out of his shell and show some great personality. They did some great double team moves and worked well together. They had tough opponents too as Remi and Christopher are a couple of mean brawlers. Even trying to cheat didn’t help them though and Blaze and Suge not only got an exciting win after a double team elbow drop from the top rope onto both of their opponents, but after the match Shawn Blaze finally got to give the Warden his comeuppance and knocked him on his ass. The crowd loved this match and everyone did a great job. Hopefully we see more teaming up of Shawn and Suge as they were excellent together.

It turned out to be the match of the night when Marshe Rockett and John Skyler put on a wrestling match of epic proportions. These guys were a couple of workhorses and the pacing slowly built up into much excitement in a very close match full of great technical action and some breath-taking bigger spots. These two guys worked magic in that ring and the fans were on the edge of their seats. These two are easily some of the best workers in the independent circuit now and both have what it takes to be big stars on a grand stage. There was no way to pick this match apart, it was one of those matches where everything that is good about professional wrestling was showcased. Good match storytelling between the two. Marshe got the win but both of these guys were elevated in this match in the eyes of the fans which meant that the fans are the ones who really won.

After the intermission Billy Cogan hosted a press conference with Mickie Knuckles and D’Arcy Dixon to discuss the problems between them and how that applies to the Women’s title scene. D’Arcy has been attacking Mickie every chance she gets and Mickie wants nothing more than to extract some sweet and painful revenge on Miss Dixon. D’Arcy also wants that title back more than anything and has become quite aggressive since losing it to Mickie awhile back. Billy said that the two are forbidden to lay a hand on each other unless it is in a match and there would be dire consequences to either should they break that rule, especially D’Arcy who would then lose any hope of a title shot again. He stated if she can follow the rule for 60 days then she’ll be granted a title match with Mickie. Mickie agreed to this but really just wanted to punch D’Arcy in the face right then and there and even said she’d like a match now with her so she could do just that. Billy and security kept the peace and everyone left the ring intact.

Jake O’Neill has been on quite a tear lately. This graduate of the Lance Storm wrestling school has been quickly rising in the ranks and winning over fans with his amazing skills (which should come as a surprise to no one considering who he was trained by). Jake had the biggest match of his career against the biggest man in RPro when he faced Jocephus for the RPRo title. This match was another excellent one and it told a great story about the huge guy facing someone smaller than him who happens to be a mat technician. Jake used his speed and skill to work on Jocephus’ arm and dodge a lot of big moves that would have taken him out. Jocephus managed to keep control soon after the match but Jake never gave up and fought back every chance he got. Near the end of the match Jake made another rally and even nailed Jocephus with a super kick. If it wasn’t for the constant interference by Eve, Jake may have gone home the champion on Friday but Jocephus managed to hold onto his precious belt in what turned out to be one hell of a great wrestling match. Strong work by both men and it was easily the best title defense that Jocephus has had since winning that title.

A four-way tag team match was the main event where The Sloberknockers, Body Magic, Da Soul Touchaz, and Pondo/Scotty Young. The action was happening in every corner of the ring and out on the floor. In one amusing spot a few various wrestlers locked onto each other to try to do a Russian leg sweep and before they could start, another wrestler would add themselves to the end of the chain until Brady Pierce came into the ring and clotheslined the one on the end which made them all topple like dominoes one Russian leg sweep at a time. It was hard to follow all the action since it was everywhere but at the end Pondo had Acid Jaz covered for the pin and would have won but his own teammate (Scotty Young) kicked him in the head which knocked him off of Jaz. Pondo was dumbfounded and couldn’t believe he had yet another partner turn on him and while this happened, Eric St. Vaughn scurried over to cover Jaz and get the win, making Body Magic the new tag team champions.

When the smoke cleared, Scotty Young and Pondo were still in the ring and Pondo was looking at Scotty for an answer as to why he turned on him. Scotty mumbled something and then with a blank stare in his eyes, he put his arms out in the symbol of “the way” as Jocephus and Eve came out to ringside to induct him into their cult. Not only that but they had Miss Prig in tow, who was now on roller skates and wearing a white dress and skating around the ring with a blank stare in her eyes and a big grin. It turned out they got her too. The recently fired Jesse Corgan was in the crowd and he came lunging after her, furious that she turned on him and joined “the way” and security had to hold him back.

Practice What You Preach had nothing but really good matches and was a really fun ride from beginning to end. It set the stage for the next few shows with Pondo wanting answers and revenge, the women’s title scene heating up, and new tag team champions. Next month’s shows will be ones you won’t want to miss!

Check out additional photos from Practice What You Preach here!