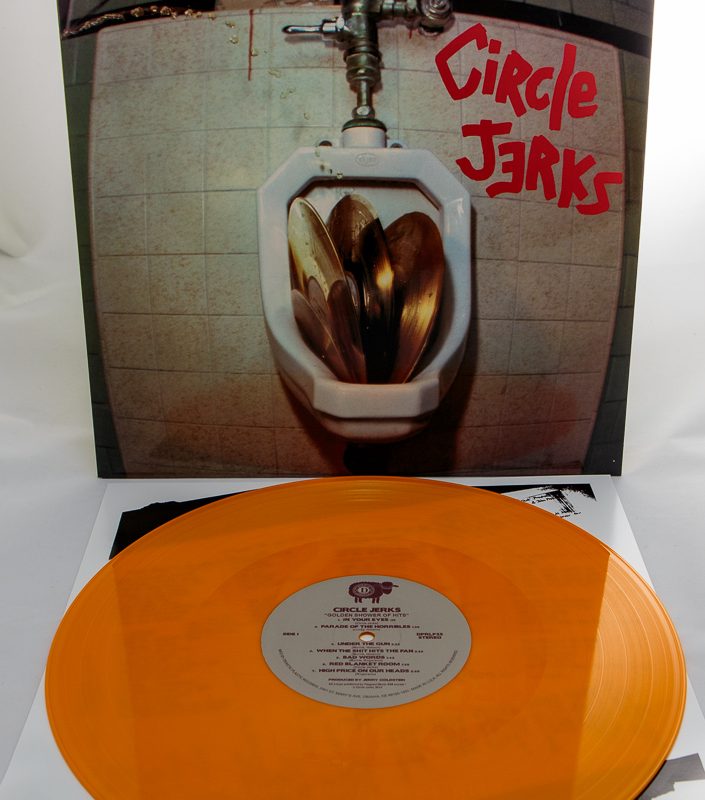 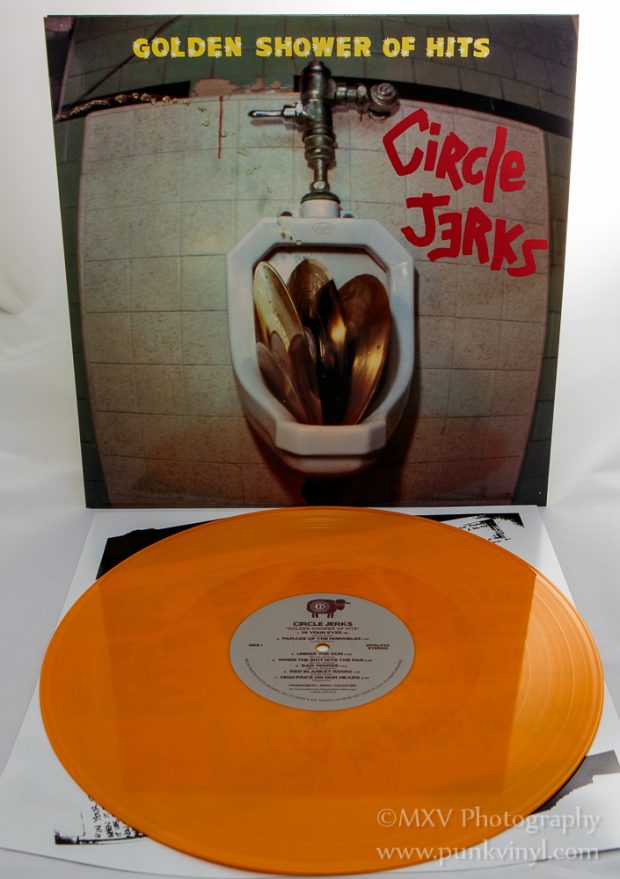 The Circle Jerks didn’t waste much time after their second album, Wild in the Streets, before following it up with a third album. Golden Shower of Hits was released the following year (1983) and it was every bit as good as its predecessor. In fact it has one of their better songs on it, “Coup D’Etat”, which was also featured on the Repo Man soundtrack. Come to think of it, in revisiting this album I think it was even better than Wild in the Streets, and that record was no slouch in its original mix.

The album was originally released in 1983 on LAX Records.  It was a strange pairing as that label hadn’t released any punk records either before or after this one. It seemed to go out of print rather quickly and then was soon reissued on Allegiance Records on both LP and cassette. They changed the cover slightly by changing the album title to be red instead of yellow and by the later part of the 1980’s that LP went out of print too which is how it remained until about five years ago when Porterhouse did a reissue of it and that has also been out of print for a while now. The album has been available on CD for years but who really wants that? Vinyl is the medium that this album was meant to be played on and once again we have the ability to do so thanks to this high-end reissue.

Drastic Plastic Records not only reissued the Wild in the Streets but at the same time they did Golden Shower of Hits and boy did they do an amazing job with it. First of all the cover reproduces all the original cover art from the first pressing (yellow title) and only has some minor changes in regards to the label information. The cover is glossy and a higher quality than what was used on the original pressings. The record is inside one of those high-end, anti-static, paper-lined poly sleeves. These are great (and pricey!) and are very soft which prevents any scuffing on the vinyl when inserting and removing it from the sleeve. The record comes on golden-colored vinyl and each copy is individually numbered on the back cover. It also comes on 200gm black vinyl for those of you who prefer black heavyweight vinyl. Personally I prefer the colored vinyl and I love how the colors compliment the cover art for their reissues. Both come with a two-sided lyric sheet that looks just like the one in the original but this one is a little larger.

Now how does it sound? I am happy to report to you that it sounds excellent. Drastic Plastic has been using Masterdisk to master their LPs and they are one of the premier mastering facilities. I compared the two back to back and they are pretty close in sound. The original had a bit of a hotter sound which almost caused a little distortion to the overall sound. This reissue is a little more even which made for a better overall sound that leans more towards a neutral sound. I think I’d have to give the nod to this reissue as is just sounded more ear pleasing to me when I compared the two multiple times. If you don’t own this record on vinyl, this is definitely the one you want for both the great sound and the great packaging. If you own an original and are a big enough fan to double-dip then this would be a welcome addition to your collection, especially the colored vinyl version as this is the only time in history this record was pressed on colored vinyl. Personally I’m glad to own both as they both warrant the shelf space and Drastic Plastic just added another home run to their long-standing record of great vinyl reissues. If you are looking for one of these and can’t find it at your local store, let them know they suck and then go straight to the source and get one from the label itself.