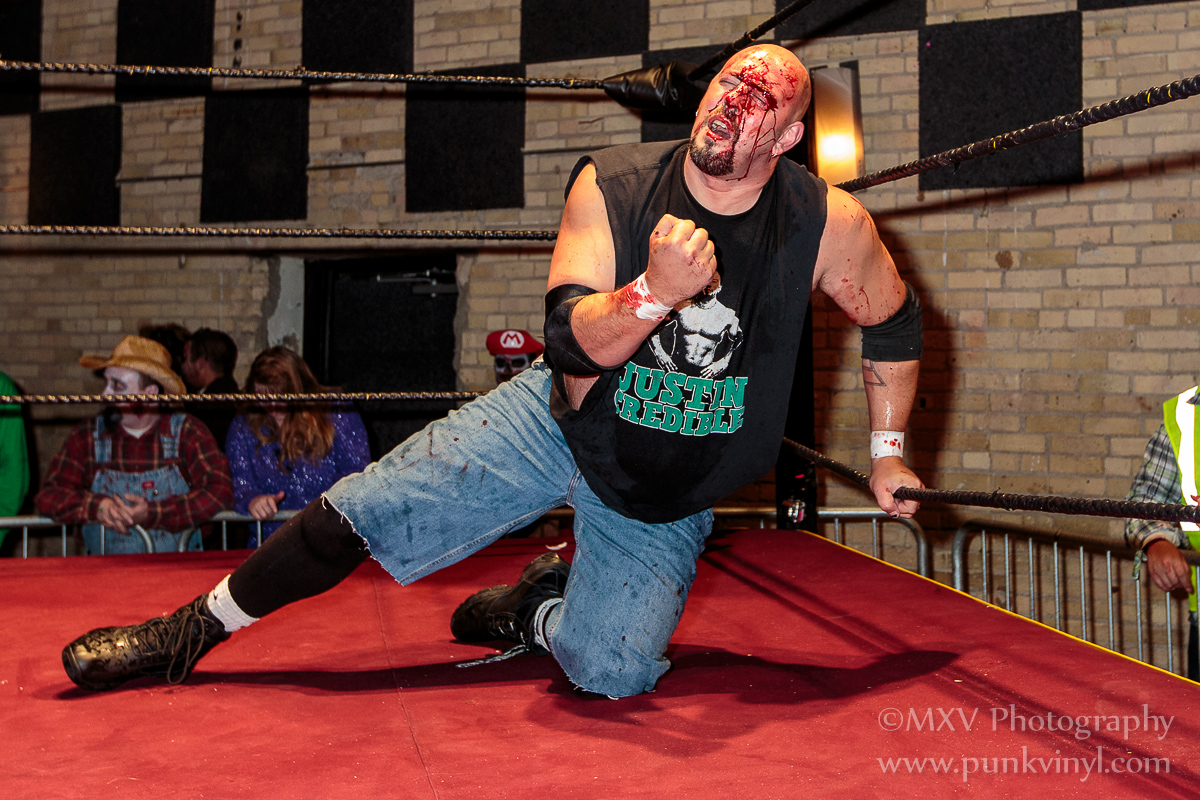 Resistance Pro Wrestling went north to Minneapolis, MN to put on their first show there which was part of the huge Zombie Pub Crawl. The Zombie Pub Crawl is an annual event in downtown Minneapolis that has live music, food vendors and Zombies among various other forms of entertainment. The crowd was as interesting to look at as the wrestling and the venue the show was in was packed full of Zombies!

First up was Mad Man Pondo vs. Scotty Young. Pondo wanted some revenge on Scotty for turning on him at Practice What You Preach and costing him from winning the tag-team titles. As soon as the bell rang Pondo went to work on beating up Scotty and the action soon went out to the floor and even into the crowd. Pondo pulled out all the stops and stapled a dollar bill to Scotty’s head and hit him with his stop sign. Scotty got some licks in too but not enough to keep Pondo from nailing him with a Death Valley driver onto the stop sign and getting the win.

In a triple threat match for the tag titles, Body Magic took on both Da Soul Touchaz and Lock Up. This one was non-stop action and it was hard to keep up with everything going down but Lock Up had things under control for much of the match as they are a couple of big, strong, thugs and Christopher was about to get the pin when Eric St. Vaughn nailed him with his magic weight when the referee was outside the ring trying to regain order. When he turned around and saw ESV covering Christopher he slid in and counted three. Body Magic came out with their tag titles still intact in their first title defense that ended as shady as how they won the belts last month.

Jake O’Neill and Cobra had an amazing match that was the highlight of the show. These two fought like hell and their styles complimented each other nicely. Lots of good technical action with cool reversals that built to some bigger spots, also with cool reversals. It had the fans on the edge of their seats and they really didn’t know who to cheer for because both men were kicking ass. Cobra was able to hit Jake with a Rock Bottom style back breaker to get the win. Fantastic match!

Speaking of fantastic matches, while the bar was set high by Jake and Cobra, Skyler and Suge D matched it in terms of enjoyment with their match that mixed a little comedy (thanks to Suge) with some hard-hitting action courtesy of Skyler. Skyler was the heel in this match and he has a great style and everything he does looks solid and tight. Suge was no slouch and he gave it right back at him and was great competition. The fans were clearly behind Suge and he got to their emotions as he fought Skyler every step of the way and got himself a victory. Great work by both men, neither who have ever disappointed in the ring.

In a women’s tag match, D’Arcy Dixon and Crazy Mary Dobson paired up against Mickie Knuckles and Paloma Starr. D’Arcy did her best to avoid doing any of the work and left Crazy Mary in there to do the heavy lifting. Mickie wanted nothing more than to get her hands on D’Arcy but she kept dodging her the entire match. Mickie took her frustration out as much as she could on Mary but Mary is so crazy she seemed to enjoy the beating. When Mary hit her finisher on Mickie in the corner, D’Arcy tagged herself in to steal the actual pin. Mickie wants to kill D’Arcy even more now and likely will once she finally can get her hands on her.

ECW legend, Justin Credible faced the big monster, Jocephus for the RPro title. Justin is no stranger to a fight, especially brutal ones and Jocephus gave him just that. The two brawled all over the venue, spending the first few minutes of the match fighting in the crowd. All of that led to Justin being busted open and having a crimson mask for the rest of the match. He fought like hell and made a small comeback but Jocephus eventually overpowered him and nailed his finisher on him, leaving him a bloody mess in the ring after the three count.

For their first major show outside of Illinois, Resistance Pro put their best foot forward and really hit it out of the park with a rock solid show. The huge crowd of zombies loved it all and were hot the whole night. Hopefully they became a regular fixture at the annual Zombie Pub Crawl and can keep spreading the disease all across the United States.

Check out additional photos from Spreading the Disease here!