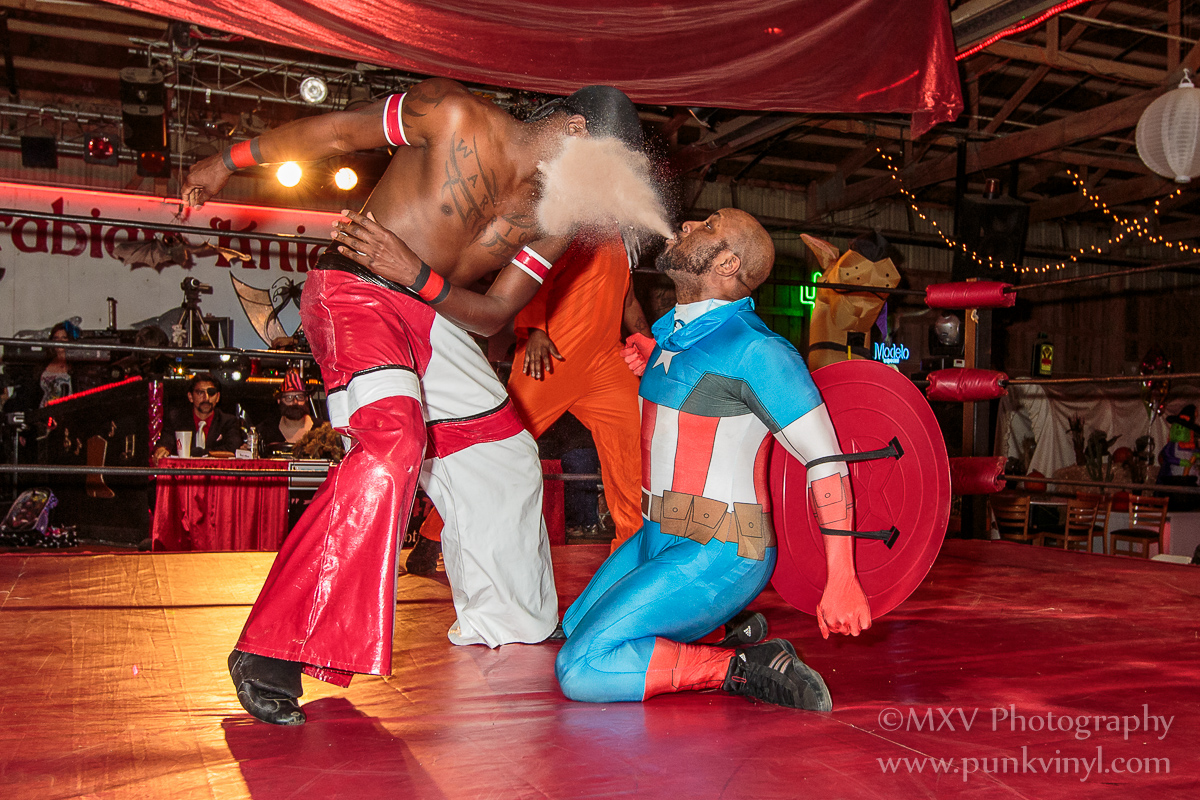 Halloween time is always a fun time of the year and Resistance Pro Wrestling returned with their Halloween themed show in Saturday night that not only included the usual great wrestling action but the talent, staff and the fans all dressed up in costumes. They even had costume contests for the fans where they won prizes based on best costume.

Acid Jaz (with C-Red in his corner) faced Cobra (with Justin King in his corner) in the opening match. This match was big on fast-paced action with a lot of big moves and aerial action. Justin King did his best to interfere too but C-Red did an admirable job of keeping him at bay but in spite of that, Cobra still hit his finisher on Jaz and got the win. This was an excellent match and what a great start to a show!

After being away for a few months, Lylah Lodge returned and faced D’Arcy Dixn. Lylah looked quite strong and she was quite aggressive in this match and really gave D’Arcy a run for her money. D’Arcy fought back every step of the way and was able to score a pinfall in one of her hardest battles in some time. Nice work here by both ladies and it was nice to see Lylah back in the RPro ring.

Lock Up was scheduled to face Body Magic for the tag belts in the third match but Christopher was suspiciously absent. Warden Myers addressed the issue saying Christopher was sick with the flu and that no, he didn’t have Ebola. This left the warden to have to take his place in hopes of winning tag-team gold. Body Magic came out dresses as Hanz and Franz from the old SNL skits and Eric St. Vaughn did a hilarious impression of them which had the entire audience laughing their asses off. The match then got started and as expected, the warden didn’t have much to contribute other than a few cheap shots to try to help Remi get a pinfall on their opponents. The warden took a few shots too but Body  Magic retained the titles after a huge spine buster by Brady Pierce.

A triple threat match took place to determine a number one contender to the heavyweight title and Suge D, Marshe Rockett and John Skyler were the three contestants. Suge came out dressed in only underwear and a white button up shirt ala Tom Cruise in Risky Business. If that wasn’t funny enough, he started doing stretches and then when it was time to lock up, neither of his opponents wanted anything to do with him. Marshe chastised him like a disappointed father and told him “go put on some damn pants!”. This entire thing was hilarious and Suge did as he was asked, under protest of course as Skyler and Marshe got to work on the wrestling. When Suge pantsed up, he came in and started attacking his opponents and saying “that’s what you get for making me put on pants”. Suge was comedy gold for the first part of this amazing match. These three put together such a fun and exciting match that it easily was the best of the night. After some near falls and not knowing who was going to come out victorious, Marshe Rockett hit his M-80 on Suge and got the win. GREAT work by all three men who all showed why they were in the running to be the number one contender and even the two who didn’t win came out looking as strong as ever.

Jake O’Neill and The Ego Robert Anthony took each other to the limit in a great technical match that’s only flaw was it went too long. If they had shaved ten minutes off this match it would have been the match of the year but the length didn’t make it boring at all. These guys threw everything and the kitchen sink at each other and it built nicely and was very exciting. These guys started off trading holds and reversals that wasn’t done in your typical “arm twist tango” and were pretty creative with their use of different holds. They slowly but methodically picked up the pace and went bigger with more great reversals and near falls.  It was amazing these guys had such great stamina to work such a lengthy match with such great action. As the match came to its conclusion, Ego hit the taco pizza on Jake which tossed him into the turnbuckle and as Jake bounced out of the corner, Ego scooped him up and dumped him on the mat with a DVD and got the win.

Crazy Mary Deadpool (Crazy Mary Dobson in a Deadpool costume) faced women’s champion, Mickie Knuckles. Mary’s Deadpool costume was great and she was decked out with all the weapons. When it came time for the referee to check her, she had to reluctantly relinquish her weapons to him. First he asked for the guns so she pulled them out and aimed them at him, thinking it would get him to change his mine. The same thing happened with her swords and then another gun until she was finally free of any weapons. This was hysterical. When the bell rang the ladies went into action and boy did they have a great battle. Mary was a great opponent for Mickie and was able to take everything she dished out and give plenty back. Mickie’s attacks looked stiff and brutal and you could tell she was channeling all of her hatred and anger with D’Arcy (who was taunting her at ringside) into her offense. D’Arcy’s taunting was too much for Mickie to take and she attacked her and that caused the referee to declare the match a no-contest and it took two referees and Jacques Baron to pull the ladies apart. Jacques grabbed a microphone and said he has had enough of these two and next month they can settle their differences and have a title match in a steel cage!

In the main event, Mad Man Punisher (Pondo) had  his chance at some RPro gold when he challenged Jocephus for the title. Pondosher came out with his usual weapons and before the match could get started, Ego came out and started bad-mouthing Pondo, saying he was washed up and had to rely on weapons to win matches. He also said this match would not be taking place as a result. Pondo agreed to relinquish his weapons and said he would be fine in challenging Jocephus in a wrestling match and that’s just what took place. This was probably the only time fans will have ever seen Pondo do arm drags, headlocks, hip tosses and other actual wrestling holds and he did them well! It was really neat to see a side of the big man that few knew existed and he was quite a formidable opponent for Jocephus. Jocephus had some help with some odd-looking costumed characters in the audience who turned out to be Eve and Jesse Corgan and Jesse threw some white powder in Pondo’s face which blinded him and led to his ultimate demise in the match when Jocephus picked him up for his choke slam like finisher. This was a fun match, great work by both men and kudos to Pondo for working so well outside of his normal box.

Rust In Peace was an excellent show that was a lot of fun for both the fans and the staff. Everyone was all smiles and those in attendance had a great time and there was some great costumes too. The show also set up two great matches for the anniversary show next month that is sure to be a must-see.

Check out additional photos from Rust in Peace here!